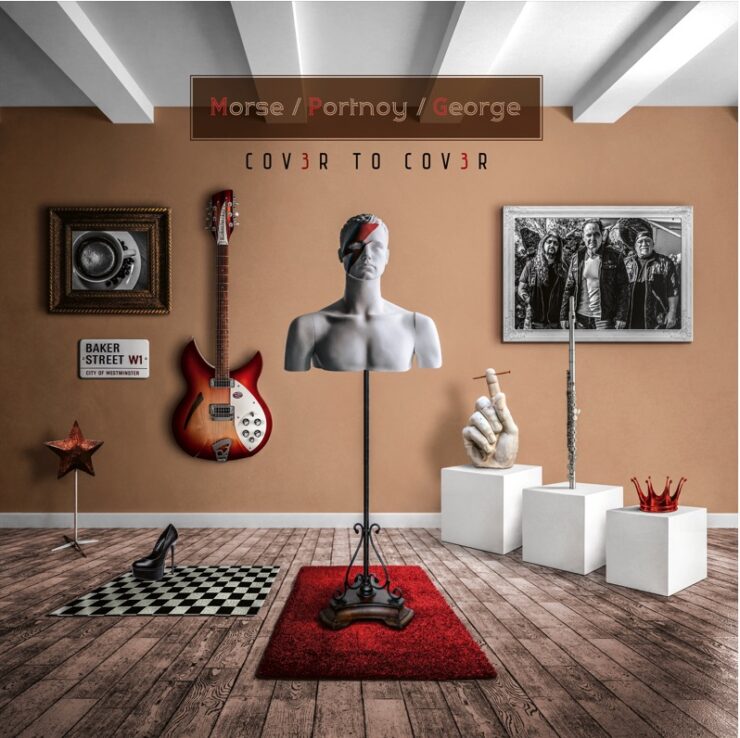 Review of Cov3r To Cov3r and The Cover To Cover Anthology by Neal Morse, Mike Portnoy, and Randy George

The third in the Morse/Portnoy/George: Cover To Cover series picks up 8 years after its predecessor, this one consists entirely of unreleased material. It revisits the catalogue of some artists who featured earlier in the series, but also has some perhaps less predictable choices.

The swirling Hammond organ and strings of “No Opportunity Necessary, No Experience Needed” kick the album off as it did on Yes’ Time and A Word album, whose arrangement this version uses. The magnificent opening leads to a surprise, as Yes’ Jon Davison handles the lead vocals on this track, which as you might expect, is right in his niche! The powerful rhythm section of George and Portnoy are relentless through this piece, creating a Bruford/Squire-on-steroids base layer for the track. Neal plays some incredible Peter Banks-style guitar, in this very faithful version of a less well known Yes-song, albeit one that returned to their set lists in 2019! It’s great to hear this combination with the MPG line up supplemented by Davison, Randy’s The Steppes band mate Jonathan Sindelman on additional keyboards and, his other half, Pamela George on backing vocals.

The next pair of songs are covers by Jethro Tull (“Hymn 43”) and David Bowie (“Life on Mars”), whose songs featured on previous C2C albums. Neal Morse manages to capture the anger in Ian Anderson’s diatribe against organized religion, but then shifts to the Bowie’s hymn-like array of characters in one of his signature anthems. Both tracks, and many others throughout the album, shine a spotlight on Morse’s electric (and stylistically eclectic) guitar playing, and his ability to perform a range of vocal styles.

First single from the album, “Baker Street” is next. MPG debated going for a stripped back arrangement, but Randy George played a key role in adding lots of the keyboard embellishments, in this driving version of the song with perhaps rock’s most famous sax break. This version retains all of the character of the original, but has an adrenaline kick, particularly towards the end of the track, as the whole band let loose.

Two tracks with Beatles connections follow and are spotlights for Mike’s vocals. Ringo’s first hit, “It Don’t Come Easy” is a natural choice for the Beatle-idolizing drummer. It’s a great version and anyone who has seen the excellent video will know that harmonies are added by “the other M Portnoy”: Mike daughter Melody, who has followed her father’s love of music, and of the Fab Four. The Beatles’ Apple label was the home of the band Badfinger, whose song “Baby Blue” is next up. Performed as a duet between Morse and Portnoy (maybe a first?) it’s a great version of a track many will now know from Breaking Bad’s finale.

From the poppier leanings of the last few songs, the band show their 3-piece chops in a raucous version of King Crimson’s “One More Red Nightmare”. Possibly a lesser known song if you’re not a Crimson fan, the version here is a reminder that these are the musicians who brought you heavier moments like Mercy For Sale and Vineyard.

From here the album winds up with a trip into the 1980s and four songs that originated in that decade. Morse has said that the Squeeze two-fer was his suggestion, and the merging of “Black Coffee in Bed” with perhaps the band’s best known song outside of the UK, “Tempted” is very well executed. Next up is the riff-heavy driving classic, “Running Down A Dream” by Tom Petty. Great electric guitar playing dominates this track, with the rhythm section’s relentless support through the closing solo.

Perhaps the most unexpected song/ style closes the album – the version of Lenny Kravitz’s “Let Love Rule”. This is a song I haven’t heard for many years, and for me, it’s probably the stand out track on the album. The Morse/Portnoy harmonies on the chorus, plus the stripped back soul stylings of the song make it very different from all that has gone before, but show that this trio can master any style. At a time when the quietness of lockdown and all sorts of world events give us plenty to worry about, a message that “love can conquer any war” is a great way to close things off.

I mentioned earlier that all three Cover To Cover albums form part of a new Anthology release. Now signed to Inside Out, it has been a chance to revisit, remaster and get the earlier smaller-reach releases into proper circulation. The opportunity has been taken to re-sequence the first two albums and this is a great thing! Unlike the third volume, Cover To Cover and Cover 2 Cover combined covers that had already appeared on bonus discs (which tended to be included at the end of the original albums) and newer tracks (which were included at the start). Those running orders have been set aside, to put them into a better paced order. I definitely feel that the “polish” the remastering gives these songs, and the refreshed track list make the Anthology a worthy addition, even if you have the original albums, and it’s available for not much more than the cost of Volume 3.

Arriving as it does in late July the new album and Anthology will make for great summer listening for fans of classic rock… and perhaps a suitable surprise gateway-gift for a music fan you know who may not know of Morse/ Portnoy/ George’s talents.