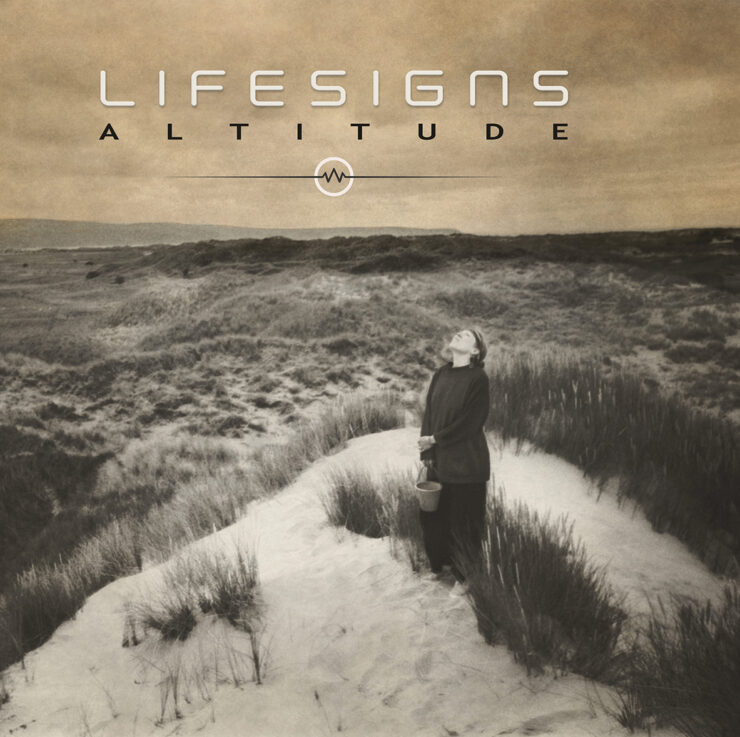 Review of the new album by Lifesigns – Altitude

Many great composers believe that they are mere conduits, and that their creations come from other planes, spirits or even from angels – angels that channel and confer their musical gifts. I am not certain whether John Young considers himself to be one of these, but I can most assuredly state that the latest Lifesigns album, ‘Altitude’, has this distinct feel to it. Do you know that feeling when music causes a sudden warm feeling in your core? A glowing sensation, similar to butterflies in your stomach? Maybe it is just a rush of endorphins due to a peak musical moment, but I call this feeling ‘The Glow’. Only a rare breed of composers can write music with The Glow – they are very few and far between. In fact you can count them on one hand, and John Young is one of them.

Driven by angels or not, Young knows how to speak to every Progger’s melodic desires. His compositions are soulful, varied, epic and utterly glorious in their musicality. ‘Altitude’ is a collection of eight celestial compositions that not only confer The Glow – they positively soar into Heaven. Any composer of this ability does, of course, require a cohort of uncommonly good performers in order to realize his grandest ideas. And in Lifesigns, despite a recent pivotal line-up change, Young certainly has them. New drummer Zoltán Csörsz very adeptly brings his own flavor to what was once the domain of long-standing member Frosty Beedle, who departed in June 2020. Csörsz, a stellar drummer from Hungary, has always kept august company, including that of Karmakanic The Flower Kings and The Tangent. Dave Bainbridge (Celestial Fire, Iona), now firmly ensconced as the band’s main guitarist, is one of the unsung gods of Prog guitar, and regularly confers paradise in this release. The massive and busy growl of Jon Poole’s bass is omni-present, and it is Young, of course, that handles keyboards and lead vocals. Not to be forgotten is long-standing member Steve Rispin, who, with his innovative sound design, gives the album a perfect edge. There are guest appearances by Robin Boult (guitar), Peter Knight (violin), Juliet Wolff (cello) and Lynsey Ward (backing vocals.)

It should be noted that ‘Altitude’, Lifesigns’ third album, was completely crowd- funded. The campaign opened in August 2020, and was fully pledged in the extremely short order of a few weeks, as was its predecessor, 2017’s ‘Cardington’. This fact speaks volumes about the fervor of Lifesigns’ passionate fan-base.

Title track ‘Altitude’ is a glorious 15-minute journey into the ether. Describing with emotion the sorrow, pain and perils of wartime aviation, the track soars like a proverbial winged spirit. A complex and enticing arrangement, the track has space, light, air and plane-loads of class. A floating intro glides into a hovering, up-tempo groove built around Poole’s bass. Then the song visits every cloud in the sky. There is a cello interlude, a huge chorus, massive instrumentals and even a choral passage. The song rises and dives, soars and dips, and it never loses its sense of anticipation. After the choral section (and yes, it is a choir), one of the finest moments of the year comes in the refrain ‘And I could hear you in another world…’ At around the 9-minute mark, this refrain releases a torrent of gratification, and there it is – The Glow. It arrives in a huge, flooding cascade of warmth that leads effortlessly into a wonderful Bainbridge solo. This moment alone is worth the full price of admission – you are in the company of angels. A wonderful string outro ends the song in the gentlest possible way, and the listener can almost feel the vanishing of the aviator into the ether. A masterpiece.

Second song ‘Gregarious’ exposes Lifesigns’ lighter side, while not abandoning weighty and current lyrical themes. Transposed upon a jaunty and cherubic rhythm, Young sings ‘It all comes down to you, how we sanitize. I wouldn’t recommend disaster, but somehow it’s everything I see.’ It all sounds eerily familiar.

Returning us to more ethereal melodies, ‘Ivory Tower’ is a heartbroken lament of broken trust. Whether or not you have had your heart or trust broken, if this song does not move you, nothing will. The angels were weeping when Young wrote this.

‘Shoreline’ brings the energetic Prog back, with Csörsz and Young presenting counterpointed rhythms and Moog solos, as well as another appearance of the ‘Lifesigns Choral Society’ and an immense Bainbridge solo. Each member is in full flight on this difficult song, which allows the band to ascend. The instrumental performances are as smooth as vapor, and Young’s golden voice is the centerpiece.

Fifth song ‘Fortitude’ continues the progressive leanings of ‘Shoreline’ and is a particularly good example of Rispin’s indispensable contribution to Lifesigns. Various sonic theatrics are to be heard, including a reverse-volume vocal repetition of the word ‘Why?’ leading into the bridge. There is a massive Taurus bass-pedal part and a generally remarkable selection of sounds, especially in the keyboard department. There is more growl to Young’s Moog, more wail in the guitars and more separation and space than you would believe, for such a full composition. More powerful than Lifesigns have ever sounded, ‘Fortitude’, like the rest of the album, shows that production counts. Take a bow, Mr Rispin.

Is it a coincidence that the next song is entitled ‘Arkhangelsk’? I suppose not. It is less than a minute of keyboard soundscapes, but it could have been conferred by the Archangel himself. It is a brief but brilliant introduction to what follows.

‘Last One Home’ is one of the most heart-wrenching ballads you will hear this year. A re-worked Quango song, co-written by Young and ertswhile band-mate John Wetton, this song shows that Lifesigns deserve to be up there with Marillion and the other superstars of Prog. Young’s voice is exposed to its full heavenly potential here, but it is Bainbridge’s glowing solo that will really make you sit up in wonder. This underrated guitarist delivers a moment of musical Zen that is as good as anything you have heard from a Rothery, Rabin, Gilmour or Howe. Take a bow, Mr Bainbridge – you have made the angels sob in the best possible way.

‘Altitude Reprise’ closes the album with a brief electronic re-visitation of the main theme of the title track. It is a reprieve from the tormented anguish of the ‘Last One Home’ guitar solo and is therefore a justified and pleasant ending to the album.

I do not believe in making comparisons, but ‘Altitude’ may well be Lifesigns’ finest release yet. John Young has outdone himself with these compositions, the band- members have furnished divine performances that glide like gossamer wings, and Rispin has delivered a production that is the stuff of miracles. Crowd-funded, you say? This album sounds more like the most expensive production of the year.

Will you feel that glowing warmth in your stomach? Butterflies in your gut? Endorphins in your blood? You can absolutely count on it. I do not know whether great composers have angels behind them, but I certainly am prepared to believe it after listening to ‘Altitude’. This is heavenly Prog of the highest order. Feel The Glow.