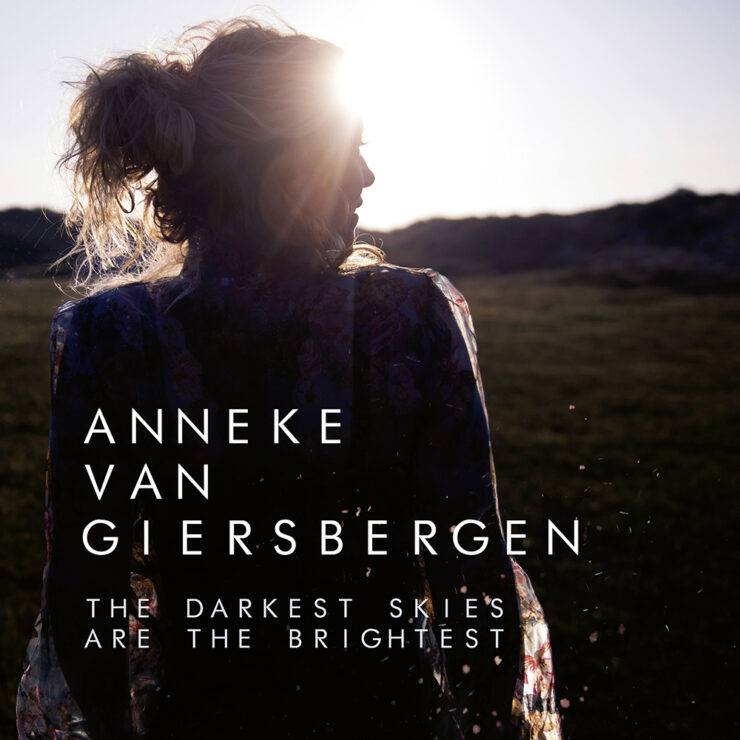 Review of Anneke van Giersbergen’s new acoustic album The Darkest Skies Are the Brightest, out on February 26, 2021

It’s an old joke in prog circles that there’s never a line for the ladies room at King Crimson concerts. But, joking aside, it is true that progressive rock — particularly the heavier, concussion-inducing stuff — has always been mostly a boys’ club.

But that’s changing. One reason: Artists like Anneke van Giersbergen keep putting out some of the best of the genre’s new material.

Case in point: The Dutch singer-songwriter’s latest solo release, The Darkest Skies Are the Brightest. This breath-taking album, Anneke’s 23rd recording, is one of the most enchanting, if surprising, releases of the past 12 months. It’s a one-off album that marks a huge departure from the prog-metal that has been Anneke’s main musical squeeze since the mid-1990s — with her first band, the Gathering, and later with Devin Townsend, Arjen Lucassen, Anathema and others.

It’s a largely acoustic album of story songs that showcases Anneke’s siren-song vocals, drawing on an eclectic range of musical styles — from folk, classical, prog and even Eastern ethnic music.

In this respect, it’s the polar opposite of 2018’s Symphonized, a live orchestral album recorded with the Residentie Orkest The Hague, featuring lush rearrangements of 11 songs spanning her entire back catalogue.

But it would be wrong to call Darkest Skies Anneke’s “unplugged” album. On the strongest tracks, she sings with the devil-may-care abandon that distinguishes her best work — suggesting it might better to describe what’s here as Anneke “unleashed” or even “unhinged.”

On the whole, this is a work of passion and unflinching honesty. She has been open about the lyrical content of the album, which lays bare the struggles of her 18-year marriage with husband/manager and drummer Rob Snijders.

Although those challenges are now happily resolved, she says, they inspired her to make an introspective solo record instead of a new album with her current prog-metal band VUUR.

“I knew instantly I needed to write music about fixing my life,” she says. “This creative endeavor would be too personal for a VUUR album. And it would also require solitude.”

Anneke wrote and recorded the basic tracks on her own in a small house outside her hometown of Eindhoven. She then asked producer, Gijs Coolen, to help her finish the record, adding strings, horns and percussion to her barebones voice-and-guitar pieces.

The result is a stark and intimate album that is daring and heartbreakingly beautiful. Like Riverside’s Wasteland (written after the death of guitarist Piotr Grudziński) and Pink Floyd’s Wish You Were Here (inspired by the late mad genius Syd Barrett), Darkest Skies pulls at your heartstrings without being maudlin or overly sentimental.

Most tracks are built around Anneke’s exquisite voice, as strong and intoxicating as Jameson on ice. Coolen’s stripped-to-the-bone production and spare musical embellishments perfectly match the tone of the 11 tracks here.

The album opens with “Agape,” a gorgeous anti-love song that sets the tone for what follows — stacking the triple threat of Anneke’s honey-sweet vocals, spare guitar figures and catchy melodic hooks that stay with you. Other highlights include:

• “Hurricane” and “Survivor” — a pair of driving acoustic rockers elevated by witchy harmony vocals that give these tracks a haunting quality.

• “The End” — a wistful lament so personal and intimate it feels like a musical diary entry.

• “Love You Like I Love You” — a lush slice of symphonic folk that echoes the best of popera artists like Sarah Brightman and Charlotte Church, but with an edgier delivery. It’s the song that best demonstrates Anneke’s classical training as a mezzo soprano.

Not everything here is quite as successful. Some tracks feel a shade too light next to the weighty intensity that defines much of this album.

“The Soul Knows” and “Keep it Simple” cross a bit too far into pop-radio territory. “Losing You” and “Lo and Behold” hustle the same adult soft-rock corner worked by the likes of Enya and Jewel. And “I Saw a Car” is a light-hearted ditty, about a gold-digger with a conscience and a sense of humor, that feels out of place here.

Nothing here approaches the banshee wail she delivered on such grinding Devin Townsend Project masterworks as “Supercrush” and “Hyperdive” (from 2009’s Addicted) or the heady theatrical intensity she brought to the buzz-and-crunch rocker “Grace” from Epicloud.

But, even so, Darker Skies finds Anneke at the top of her game and still breaking new ground in ways that are both unexpected and compelling. At 47, she isn’t afraid to take a risk and reinvent herself.

The bottom line: This is a remarkable album — musically and lyrically — that showcases one of prog’s most distinctive voices (regardless of gender). It also reflects a confident maturity and depth that rewards repeated listenings.

One final note: For the headbangers among us, Anneke says she hasn’t given up on VUUR and additional collaborations with Lucassen and others may be in the offing.

But whatever she chooses to do next will bear watching — and listening — regardless of whether decides to drop her acoustic guitar in favor of her trusty black Gibson SG.

Released on Feb 26th, 2021 on InsideOutMusic
Key Tracks: My Promise, Hurricane, The End