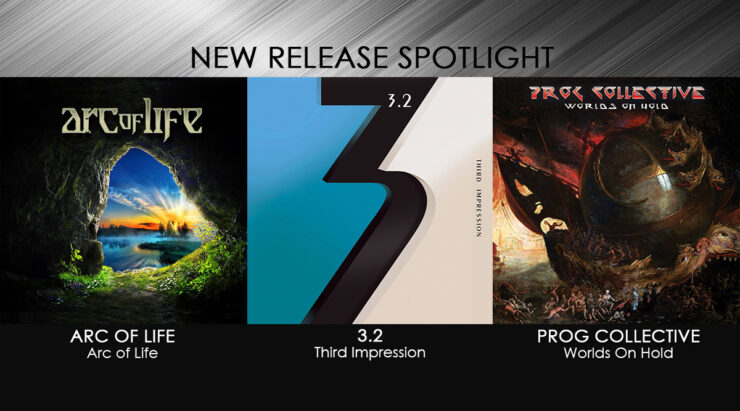 Arc of Life is the new group featuring three members of the current YES line-up, vocalist Jon Davison bassist/vocalist Billy Sherwood, and drummer Jay Schellen, joined by keyboardist Dave Kerzner (In Continuum, ex-Sound of Contact) and guitarist Jimmy Haun (also featured on YES albums in the past). Billy Sherwood production is front and center, while he and Davison both take shots at lead vocals. The proggers take a more streamlined approach to their songwriting with radio friendly material like the album’s first single “You Make it Real”, and “I Want To Know You Better,” though there are enough twists and turns to keep the prog faithful engaged. The album also has some stranger offerings as in “Talking with Siri” and “Just in Sight,” while the 9 minute track “Locked Down” finds the group firmly in the prog zone. The is a worthy addition to any Yes fan’s collection.

Tracklisting:
1.Life Has A Way
2.Talking With Siri
3.You Make It Real
4.Until Further Notice
5.The Magic Of It All
6.Just In Sight
7.I Want To Know You Better
8.Locked Down
9.Therefore We Are
10.The End Game

Robert Berry returns with a second 3.2 album, Third Impression, a continuation of the band 3, the band Berry was in with Carl Palmer and the late great Keith Emerson. The first 3.2 album, a reboot of the original “3” project was released in 2018 to much acclaim, and the new follow-up continues to build on that album mixing epic songs with more melodic and AOR moments. Elements of Keith Emerson’s synth are still very much present in tracks like “A Fond Farewell” while the ballad “A Bond of Union” is one of many great melodic moments on the collection. Fans of 3 and the previous 3.2 album will find a lot to enjoy here.

Tracklist:
1.Top Of The World
2.What Side You’re On
3.Black Of Night
4.Killer Of Hope
5.Missing Piece
6.A Bond Of Union
7.The Devil Of Liverpool
8.Emotional Trigger
9.A Fond Farewell
10. Never