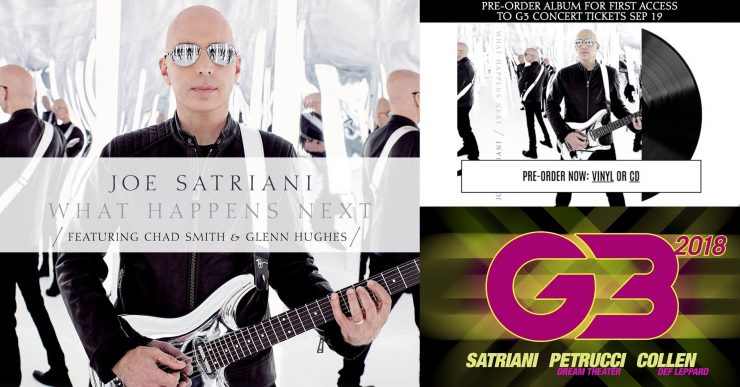 What Happens Next is set for a January 12 release. G3 tour kicks off on January 11 in Seattle.

Joe Satriani has announced a new album and new G3 tour, this time with John Petrucci and Phil Collen. The G3 tour—featuring Petrucci and Collen—launches on January 11 in Seattle, WA and continues across the U.S. before winding up on February 25 in Milwaukee, WI.

His 16th solo album, What Happens Next, was recorded with a remarkable power trio: Satriani on guitar, Rock and Roll Hall of Fame inductee Glenn Hughes (Deep Purple/Black Country Communion) on bass and drummer Chad Smith (Red Hot Chili Peppers), the latter reuniting with Satriani for the first time since their work in the supergroup Chickenfoot.

For the album, Satriani was once again joined by producer/engineer/mixer Mike Fraser, his frequent collaborator over the last 20 years.

What Happens Next is set for a January 12 release.