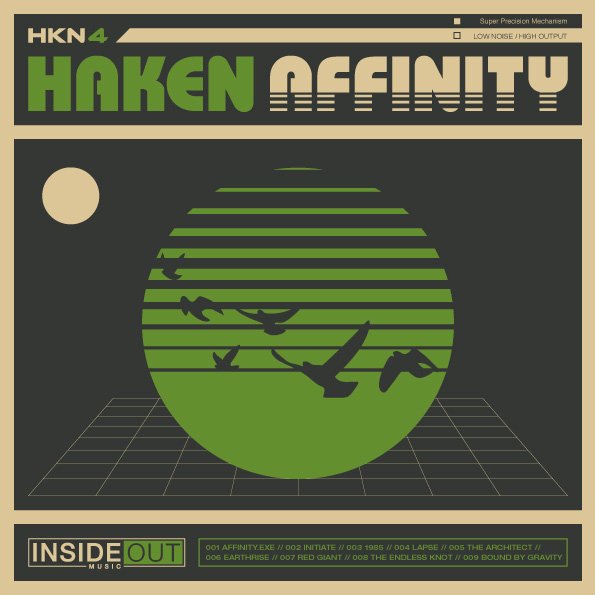 Review of the brand new 4th studio album by Haken.

Since their rise to Prog fame with 2013’s stellar album The Mountain, Haken have established themselves as Prog metal frontrunners and have set expectations high in anticipation of their fourth full length studio album, Affinity. Their performances on recent Prog cruises over the last couple of years and their Restoration Ep have also added to the anticipation among fans hoping that there might be a band that can take the mantel from the likes of Dream Theater and Opeth. This is a band which continues to push their sound and style and yet at the same time continue to maintain their identity. With their latest, Haken not only exceed expectations, but might have set the bar higher for everyone else.

The first thing noticed is their retro-themed album artwork. It is done tastefully and with a hint of their British humor. Diego Tejeida (see our interview with Diego) is able to flex his retro keyboard sound muscle throughout the entire album. His play proves to be the glue which holds the ship together as he has done in the band’s past epic recordings. The opening track dynamically sets up, the first song (and video) “Initiate.”   The opening riff brings a Leprous-like vibe leading into the masterful and unmistakable Ross Jennings vocal work. The four plus minute song establishes Haken is delivering another awesome musical journey.

“1985” is the third track and it provides the first climax on the album. The song is characterized by the 80’s style keyboard effects, tight guitar/bass/drum riffs, catchy chorus, and prog rhythm satisfaction which Haken has proven to be second to none. The heavy 80’s influenced prog rock sections are a blend of Yes, Toto, and Rush. In typical Haken fashion, these are also surrounded by heavy drums and guitar grooves. This is the type of song which one would normally expect to carry an album to greatness, this is where this band now takes it to another level.

The epic of the album is “The Architect.” The fifth track opens with the staple Haken low frequency rumble with melodic distant keyboard melody then kicking into what sounds like a BTBAM “Selkies” inspired keyboard riff which is joined in by guitars and bass. Prog metal technical play is at the forefront for the first few minutes with guitarists Richard Henshall and Charlie Griffiths setting the speakers on fire. Drummer Ray Hearne also shines throughout, this album producing his finest moments.  At this point, Tejeida and Jennings take over with a cool groove. The rest of the band joins in as the volume builds. This 80’s electronic vibe ties the song into the retro theme of the album. We also get to enjoy new bassist Conner Green’s tastefulness and skill with a great bass solo which transitions into a groovy Cynic fusion style interaction between the bass and guitars. Haken’s ability to write fresh and different material while maintaining their signature sound is more apparent at this point. The now Opeth influenced melody is then rounded out by the brief growling vocals of musical guest, Leprous’ Einar Solberg. The point where the instrumental section transitions back into the chorus is an applause worthy moment and certainly will be when the band performs this track live. The song climaxes with a classic haunting melody from Jennings. This is easily a song of the year candidate.

The album is perfectly rounded out by shorter tracks like “Lapse,” which provides a great groovy solo section, and “Earthrise”, the latter providing the anthem type chorus within a pop format but still providing enough technical moments to outshine their contemporaries.  If this alone was the band’s new sound, it might not excite fans, but the ability to produce such a song along their heavier and more adventurous moments is precisely what makes this band stand out.  They can do it all, and do it all extremely well.

“Red Giant” is another change of pace that track that finds the band exploring its electronic side complete with an odd time signature and unique vocal melodies.  The band come back with another explosive metal track in “The Endless Knot,” which is another album highlight and one where the band are at their most technical.  The album ends on a more subdued but glorious note with the epic ballad “Bound by Gravity.”  This song again finds the band expanding their own boundaries and by the time the song builds to its crescendo, you might find yourself applauding at the mere scope of not only this song but of the album as a whole.

There is so much superb work compositionally and instrumentally throughout all the tracks, Haken have raised the bar not only for themselves, but for the entire modern rock/metal Prog genre. 2016 has already witnessed Prog’s top acts deliver their latest creations which have shifted the world of prog rock music into high gear, but none measure up to the crowning achievement from these relative newcomers. Even at this early juncture of the year, Haken’s most brilliant studio effort, “Affinity,” has lined itself up to be at the top and be seriously noticed and appreciated. Haken has managed to top both their “Mountain” and that of Prog, as well.