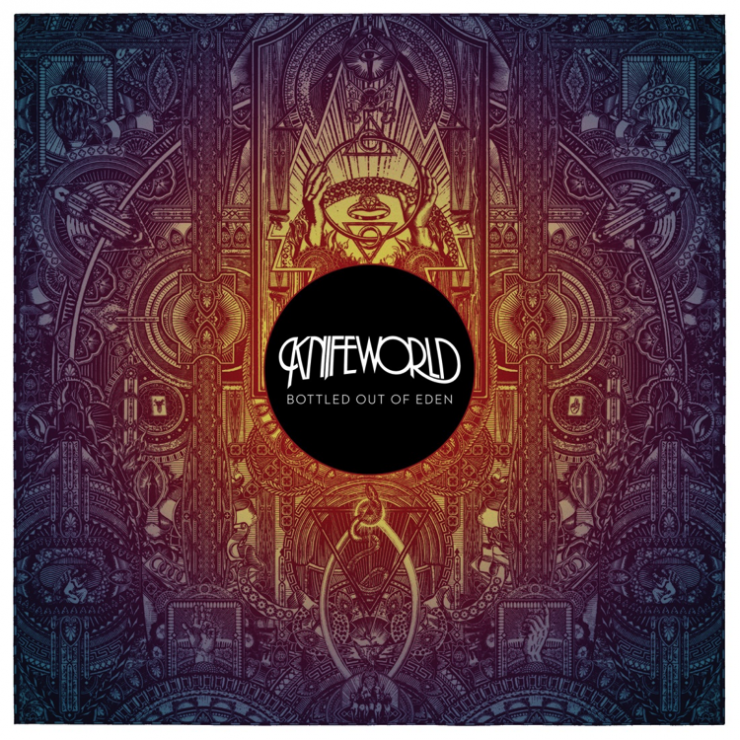 Review of the new Knifeworld album due out on April 22nd, 2016 on InsideOut Music

Knifeworld is an eight-piece UK outfit led by Kavus Torabi (Gong, The Cardiacs). If forced to categorize them, I suppose I would describe their music as (here goes, take a deep breath): “psychedelic new-wave alt-prog with horns, harmonies and havoc, no small amount of mischief, and a penchant for twists and surprises that weaves a dense tapestry of light and dark, up and down, in and out, through quirky musical bi-polar mayhem that would have resulted in chaos if it did not have such singular purpose and direction in composition and arrangement.”

Knifeworld have a prominent horn and woodwind section, several competent vocalists that proffer discordant but weirdly appropriate harmonies, great players, a downright un-respectable amount of unique ideas, themes and virtuosity to play with, and above all, they have Kavus Torabi. Oh, and they also have a glockenspiel.

Knifeworld’s previous (second) album, 2014’s The Unravelling, took five years to create, with Torabi’s duties extending to matters technical including the mixing board. This one was written in a matter of months and was fully produced in less than half the time taken to create its predecessor, using live studio performances. This was mainly due to Torabi’s decision (despite his well-known tendency to be “precious” about his music), to stay away from the recording console and to concentrate solely on his own playing, singing and arranging. (The band, particularly the horn players, were even allowed more involvement in creating the arrangements.) Bob Drake, long-time technical associate, was thus for the first time given full reigns as the album’s producer.

There has been a recent trend in Rock and Prog for established bands to abandon studio wizardry, eschew overdubs and return to recording “live” in the studio. Knifeworld’s new album is the latest in this trend. It certainly was a quicker process creating this album than the last, so fans will be asking the question: have Drake’s wider influence, and the “live” feel, derogated from Knifeworld’s now-legendary quirkiness? Perhaps a little. The songs are shorter, there is sharper focus, and the arrangements show more brevity. But fear not – the results are no less pleasing. In fact I would say that the unique motor-mesh of sound that was last heard with “The Unravelling” has been treated with an even finer lubricant on this album. The quirkiness is still there – it’s just more subtle. Is it still Knifeworld? Absolutely.

Angular, demanding, quirky, introspective, irreverent, mischievous and self-contradictory (but always created with clear and precise intent), horns honking and harmonies swooping, “Bottled Out of Eden” is certainly an impressive album of short songs. Recorded in the French Pyrenees, most of it was rehearsed live before recording, so it contains little overdubbing and layering. There is also less guitar (and no guitar harmonies at all, which I personally miss.) Thus, in some respects, fans can expect a slightly different experience to “The Unravelling”. But in other ways, this album carries on where its predecessor left off, only with a more focused and defined approach.

As always, there is light and dark, and Kavus Torabi could indeed be described (in the best possible way) as musically bi-polar. This album, at first listen, seems to showcase his “happy” side more. But don’t be fooled. The album’s title references the fear of Eden, even though at first blush some of the tracks sound like they may have been bottled IN Eden (before the apple incident). But the darkness is always there, especially in the lyrics

“High / Aflame” starts the album with an ominous drone overlayed by Torabi’s menacing vocals. The drone is suddenly rent asunder by the ambush of the horn section. Then Melanie Woods‘ vocals, backed up by the other vocalists’ doo-wop harmonies, give way to a horn part that should, quite frankly, sound ridiculous. But it doesn’t. It sounds amazing. Catchy and incongruous, the song is a gem, and the album is off and running.

Second song “The Germ Inside” starts gently with a pleasant piano melody, but soon enough the band continues the up-beat frenzy and mayhem, this time with an angular lead vocal hook (“I got it/Don’t get me all wrong”) that would have Frank Zappa scratching his head for the chord progression. It seems light, belying the theory that this album was written pursuant to the death of four of Torabi’s close friends, including Daevid Allen. But this music is multi-layered, and, on reflection of the lyrics (“the parasite inside”) particularly, it suddenly occurs to the listener that for all fast-paced phrasing, the quirky horn stabs and rainbow harmonies, there is a growing anger underlying the song. As the song ends, a tambourine is furiously thrown to the studio floor, and this sound remains on the record – a not-so-gentle reminder from the Band that there is a dark night to every summery day.

Whereas the first two songs have an almost post-punk vibe, third song “I am Lost” unveils the high-end Prog credentials for which Knifeworld clearly qualify. The song allows Woods to take initial charge of the vocals in an (again) up-beat 7/8 that also belies the darker tone of the lyrics. The piano/vocal interlude is simple and gorgeous and gives the song room to breathe away from the horned frenzy, which threatens, but never quite returns after a suitable build-up. This song is the most dynamic (and perhaps the Proggiest) on the album, but perhaps even more could have been done with it. For example, one can’t help feeling that the horn outro could have been followed by a guitar solo. Nevertheless, the listener has been blessed.

By now Torabi and the band are sending a clear message – this is brief, sharp Prog, with lively horns and harmonies. Everything has been up-tempo, until this point. Thus, if a little angry, the album so far seems to be portraying the “up” side of Torabi’s musical bi-polarity – surprising, given the compositional context of Torabi’s friends’ death.

Well, the surprise is not long-lived. “The Deathless” starts with an insistent slow tom-tom and guitar march that perseveres relentlessly, giving Torabi the room to build the composition using the myriad tools at his disposal. It could be a funeral march in a misty valley, with a band of brothers singing a wordless chant of mourning as they carry their friend’s casket. The horns make their appearance as Woolacott doubles the back-beat, and they are counter-pointed dramatically against the vocals that almost howl in anguish until the crescendo.

“Foul Temple” shows Korabi’s ability to position dark and even disturbing themes with attractive melodies that anyone else might have aligned with, perhaps, a love song. Short, sweet and yet bitter, this short piece is really an intro to “Vision of the Bent Path” itself a discordant but poignant intro to centre-piece (pun intended) “I Must Set Fire to Your Portrait.” The latter song shows Torabi flexing his Prog muscles, using complex rhythms and horn arrangements to create a platform for his almost sneering, but certainly menacing theme: “ So you hang it up from your wire, I got matches, let’s start a fire.” The band really kicks it up a gear in this one. Prog menace at its best.

“Lowered into Necromancy” is not as sinister as its name would suggest. It is indeed about pain, loss and introspection, but it is also about hope. Harmonic guitar melody, angular riffs, percussion, handclaps, and indeed, more menacing undertones, are all mixed with clear intent to climax at the question posed at the song’s end. It is a brilliant piece of work, played and sung with personal perspective.  “A Dream About A Dream” is less jarring and more gentle, but no less dramatic. The sedate piano line on which the song is based is bolstered by the full band embracing the theme, with great harmonies and instrumentation, and this time, no abandonment to frenzy.  The song closes with the introspective statement “I will not believe those words”.

The theme continues with “Secret Words”, perhaps the most melodic and introspective track on the album. Torabi’s stand-out guitar-picking sets the scene for what turns into a harmony-driven dialogue of self-reflection. The woodwinds fit beautifully in the context of this song – I could not have imagined a guitar or any other instrument fulfilling the same role. Only Knifeworld could have delivered this song in this way.  “Feel the Sorcery” takes us back to the “up” side of Knifeworld’s musical bi-polarity, with a pop-driven vibe that unashamedly exploits Torabi’s catchy guitar riff. It is a great closer for a great album, and the band is in full showcase mode on this one.

“Bottled Out Of Eden” is a collection of shorter, pointed songs that certainly entrench Knifeworld’s unique style, and will please the band’s more than significant fan-base. It will undoubtedly attract new fans too, as long as they are prepared for the unexpected, are happy with sharp focus, don’t mind horns and woodwinds when used correctly, and are not looking for Gong all over again.   If Kavus Torabi plays with Gong he has to be a genius, right? Let’s just say that even though Knifeworld is a completely different animal to Gong, Daevid Allen would have been proud.

Key Tracks: High/Aflame, I Am Lost