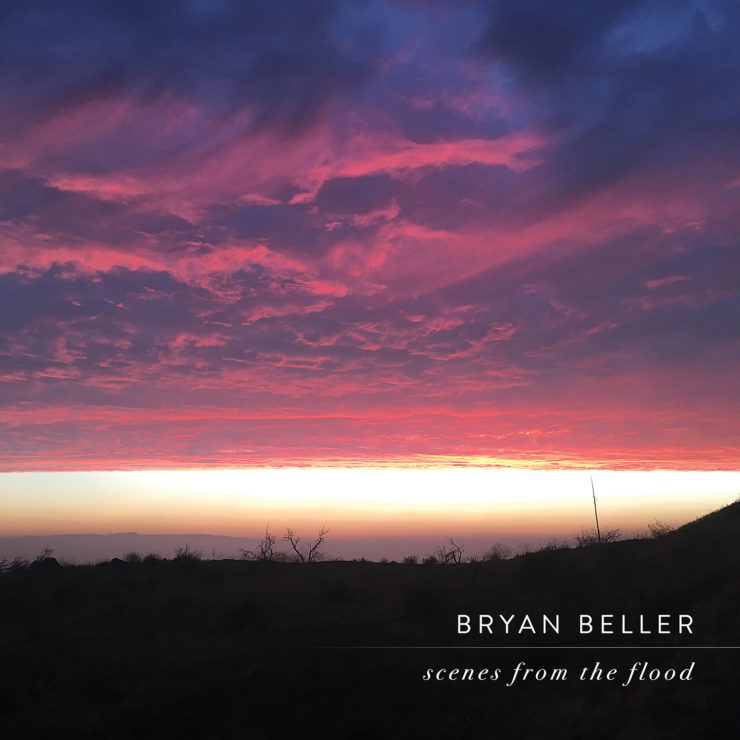 Review of Bryan Beller’s solo album – Scenes From The Flood

Bryan Beller is one name that’s usually associated with many excellent projects or bands. Be it with The Aristocrats, Joe Satriani, Steve Vai, Dweezil Zappa or whomever it may be, you’ll always note that he will stand out. As an extremely talented multi instrumentalist, it was about time for him to bring us a new solo album, his first one in eleven years. The initial idea for Scenes from the Flood was conceived 6 years ago. As a concept album with not a lot of lyrics, the story and emotions are told mostly through music, which is a rather difficult task. According to Beller, the album is about “aspirations and disillusionment” – very personal and once in a lifetime events that are very significant to you.

Listen to our interview with Bryan Beller on the new album.

Musically speaking, Beller has the advantage of having worked with some of the greatest musicians on Earth. He only stopped to think who would be able to play the parts he wrote when the album was basically done – that’s when these connections are important. That lead to an insane amount of guest musicians and some interesting combinations that shape Scenes from the Flood its own sound.

One of the more notable guests is of course Joe Satriani, featuring on track “Volunteer State” to kick off the album right after the intro. Beller essentially wrote a Satriani song here and got the right guy for the job. A very optimistic and light hearted song with a lot of energy and incredible playing all around. It’s then followed by “Everything and Nothing” which follows sort of the same mood but with more emphasis on Beller’s own performance. Coupled with the effects he used and the narration over, it works flawlessly.

“The Quickening” works as a bridge to the previous track and “Steiner in Elipses”, both short tracks but the latter stands out by completely changing the formula. Way heavier, fast and more aggressive, it features Mike Keneally on guitars and Gene Hoglan on drums. Then the album shifts back to a more moody guitar showcase in the form of “Always Worth It”. One of the most notable tracks in the album, it features what could probably be considered the main theme for Scenes From the Flood for the first time – which is repeated throughout the record while being stuck in your head forever.

One of the most ethereal and atmospheric tracks on the record “Lookout Mountain” is played by Mike Dawes, an extremely talented acoustic guitarist. This is one of those songs you have to listen to with headphones and paying close attention to the small nuances in his playing to truly appreciate. It represents the calm before… “The Storm” – a genius progressive metal piece; fantastic riffs, heavy and powerful. Drums are not only handled by Gene Hoglan but also doubled by HAKEN’s Ray Hearne. This is the one song that made me wish Beller takes some of these guys for a tour with this music – this would be killer live.

Right after “The Storm”, there’s “The Flood” which is a piece played by Bryan Beller on keyboards and Janet Feder on guitars. According to him, Janet was the artist that most elementally impacted his vision of the album and this song is a realization of a longtime due collaboration between the two of them. It’s an ambient piece, beautifully executed reprising some of the themes from the intro as well.

At this point, we’re familiar with how the album sounds and how Beller operates in his compositions. “Bunkistan” brings our expectations and bump it to 11. Melodically brilliant, Beller himself takes on most instruments besides drums and percussion and delivers some great bass & guitar solos in this amazing track. Another song which Beller takes on the lead guitars is “As Advertised” – very energetic tune with some great overdriven leads.

First song structured around its lyrics is “Army of the Black Rectangles”. When Joe Travers lays some serious intense drumming and Beller himself assumes the lead vocals until “The Outer Boundary” shifts gears into some beautifully orchestrated piano arrangement of the main theme. “Angles & Exits” is a cover of a dark ballad by Janet Feder. Beller is on vocals again and surprinsingly this one fits right in the album, giving it some breathing room before the final sections. The final section was extended beyond the original version and it sounds intense and emotional.

“The Inner Boundary” is building up to something and that something is “World Class”. This track serves as the climax for the album and it has one of the most impressive lineups in just one song, opening up with sitars and rhythm guitars by Nili Brosh, before John Petrucci assumes the guitar realm and delivers everything you expect him to. Ray Hearne is also on drums for this one, so if you ever dreamt of another kind of DT & HAKEN crossover this might interest you. “World Class” is not just an absolutely nuts song on its own but it also works well in the context of the album.

And to close out the record, “Sweet Water” is another kind of ‘insane’ from the previous track. It’s mostly a Guthrie Govan solo over some beautifully layered instrumentation – but it really feels like a lot of work was put in every small note here and some details very meticulously crafted. An emotional solo, fantastic performance from beginning to end – a great representation of Scenes from the Flood as a whole.

I’ve been listening to this album daily for a few weeks and I don’t get tired of it. The concept is relatable and it works flawlessly. With how much time and dedication was put into each of these songs, how many incredible special guests are featured, it really feels like 1,000 words don’t make it justice.

By reading Bryan’s website & social media posts or listening to his interviews, it was very clear that he had a clear vision for this album since the beginning of the process. It was executed with passion – that’s why it worked. Scenes from the Flood is a must-have album for any fan of quality music.

PART TWO
Always Worth it
Lookout Mountain
The Storm
The Flood

Featuring an all-star cast of 26 musicians including (in alphabetical order):