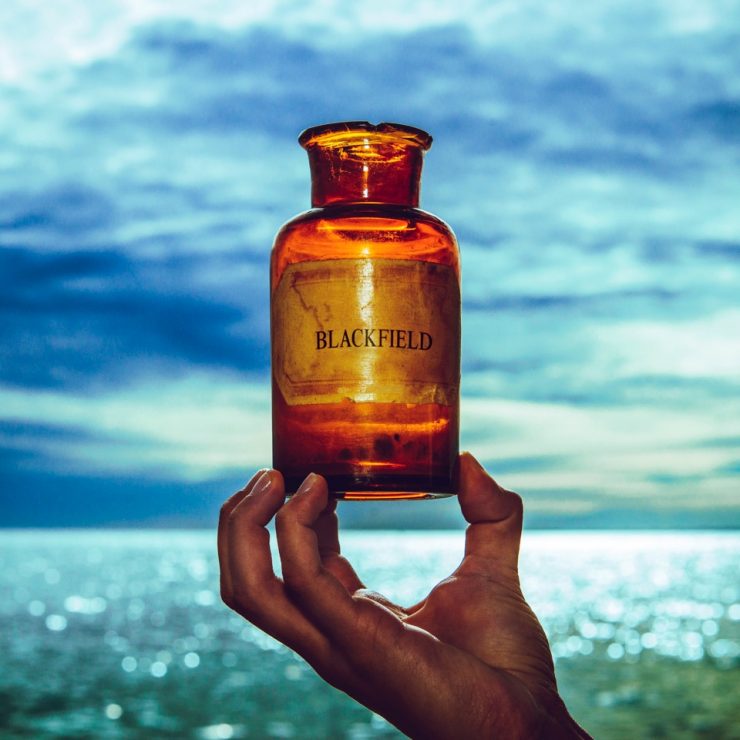 Blackfield first formed back in 2004 as a collaboration between Steven Wilson and Aviv Geffen after the two met in Israel following a Porcupine Tree show.  The debut album was a great mix of Geffen and Wilson’s melancholic style set against more alternative pop setting.  The result was Porcupine Tree-lite, whereas songs that might have usually gone 10 minutes as Porcupine Tree, within Blackfield were 3-4 minutes at the most.  The follow up, Blackfield II, was a continuation of the first album.  Both were fantastic albums that offered something different for fans of Wilson to absorb while they waited for a new PT album.  The following 2 albums (Welcome to my DNA, Blackfield IV), however, fell short of the quality the band was known for.  The albums were largely very mellow and one dimensional, perhaps due to the Wilson taking more of a step back on the last 2 albums.  There is, however, a reason to be excited if you are a Blackfield fan.  The new album ‘V’ finds Steven Wilson back in the fold and, as a result, the album is the duo’s best since the second album, and might even be their most diverse and refreshing work yet.

The album kicks off with the orchestral intro “A Drop in the Ocean” before hitting into the perfect Wilson track “Family Man”.  Set against powerful drums and keys, Wilson’s voice starts right away, and immediately the album has a different and fresh feel than the previous Blackfield albums.  The chorus is old school Porcupine Tree, which should make fans of that band warm with nostalgia.  It is definitely a return to Wilson’s classic sound.  The strong opening of the album continues with the brilliant, “How Was Your Ride”, a gorgeous ballad that begins simply with a piano and Wilson’s voice.  The orchestration plays a big role here as the song builds.  The simplicity here highlights Wilson and Geffen’s abilities to let a great hook do the work and let the song soar.  This is one of the best track’s in the Blackfield catalog.

Geffen’s voice definitely has a heavy accent when singing in English, but it has grown since the early albums, and certainly does not feel forced.  On tracks like “We’ll Never Be Apart”, he sounds raw and urgent.  The mid-tempo rocker is a different type of song for the band and a nice change of pace.  There are other highlights such as the ethereal “Life Is An Ocean”.  The background vocals create a nice call and response with the lead vocals, and when the drums kick in towards the end, although expected, the song falls right into place.

The second half of the album finds the two taking a few more risks.  Where previous Blackfield albums had more than their share of somber and melancholy ballads, here there are a few different options throughout.  “Lately” is one of the more upbeat tracks the duo have ever produced.  It is as straight forward a rock track as one might hear Wilson front, however, he sounds at home on this track that could have even fit nicely on Porcupine Tree’s album ‘Stupid Dream’.  The instrumental “Salt Water” separates two Geffen-led songs, the bluesy, “Jackyl” which has a few surprises, and the grand “Undercover Heart.”

The album concludes and peaks with another one of the highlights, the semi-biographical “From 44 to 48” which Wilson lends his voice to. The lyrics start oddly with “and then between 13 and 17…” as he sings about the different stages as he gets older.  The guitar that acts as the chorus is reminiscent of the guitar part from “Prodigal”, another PT classic song.  The duo’s harmonies here are glorious.  This is one of those songs that only Wilson can do justice to and it utterly beautiful and brilliant; a great ending to the album.

Blackfield only pales in comparison to the member’s other full-time responsibilities.  By any other measure, this is a great album and one that is easy to enjoy.  It is great to have the band return to what they do best.