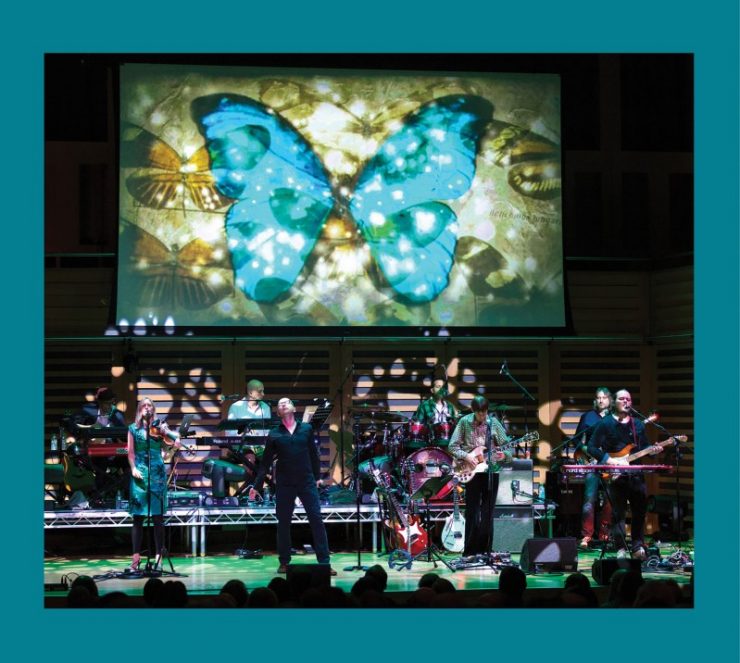 Defying all convention, BBT’s habitual personnel changes and self-imposed hiatuses have failed, over the years, to erode the band’s fan-base. On the contrary, rare but wonderful studio releases recorded by stellar musicians, whether long-standing members or new, have provided enough succor to the band’s followers (the self-styled ‘Passengers’) to ensure that interest in the band never waned. Indeed, the fan-base grew and the clamour for live performances continued to mount over the years until finally, one weekend in August 2015, three memorable shows took place at King’s Place in London. The two shows originally scheduled had sold out in just hours, and a third (Sunday matinee) performance was therefore hurriedly added. It, too, sold out with alacrity, and the scene was set for what was eventually to be voted “Event of the Year” in the Prog Magazine Readers’ Poll.

These concerts were always going to be special events. I attended all three performances (I did fly for over twelve hours to get there, so I feel only a little guilt about that) and was therefore fortunate enough to witness the slight variations and nuances that a second or third performance of a song can bring. When the release of live album “A Stone’s Throw From The Line” was announced, my first question was therefore whether BBT would release one particular concert performance as a whole, or whether they would select individual song performances from all three. They chose to do the latter, and all in all, I think this was a good decision.

The track list reflects the actual running order of the shows and kicks off, as any self-respecting Passenger would expect, with crowd-pleaser “Make Some Noise”, after which the familiar refrain of “The First Rebreather” commences. Thereafter a veritable rolling meadow of quirky, anecdotal English Prog, such that only Big Big Train can deliver, is unleashed, right up until the final cymbal crash after the a capella ending to “Hedgerow”. It is a feast.

The lengthy two-CD set includes songs taken largely from the two “English Electric” albums and “The Underfall Yard”, as well as the then unreleased “Wassail”.

From the rapturous applause that opens the album (during which an audience member shouts “Make some noise!” to which lead vocalist David Longdon replies “Funny you should say that” before the song kicks off), there is an air of celebration that permeates the entire album. The musicianship is, of course, full cause for such celebration – superlative instrumental and vocal expression of gripping anecdotes and stories that entertain and indeed educate. If the band was “learning on the job”, as Longdon announces at the end of “Kingmaker”, a very fine job it was. Special mention must be made of master drummer Nick d’ Virgilio’s supreme talent, which provides the glue so vital to hold such a detailed tapestry together (he also delivers a brilliant solo at the start of “Judas Unrepentant”.) Also deserving of special mention is multi-instrumentalist Rikard Sjöblom, whose contribution throughout is noticeably indispensible. Naturally, no review like this would be complete without reference to Longdon, who justifies his reputation as the successor to Peter Gabriel’s vocal throne, and to the tireless efforts of fine bassist Greg Spawton, the ongoing driver of the BBT project. He should be proud, because this band is in very fine form indeed.

I could go through every song, but somehow, it seems more appropriate to list a string of epithets in an attempt to describe some of the various moments to be experienced when listening to this album: bountiful, pastoral, story-telling, beautiful, historic, complex, quirky, mythological, dark, whimsical, startling, poetic, boisterous, kaleidoscopic, mysterious, elaborate, fantastical, bombastic, interwoven, lyrical, brash, tender, pagan, pretty, cantankerous and brilliant. Oh, and (despite d’ Virgilio’s American citizenship and Sjöblom’s Scandinavian heritage), thoroughly, thoroughly English.

Recorded and mixed by long-time BBT collaborator Rob Aubrey, the sound quality of this live album is exceptional. There is a certain uncompressed separation and timbre in the mix that is very pleasing, while still remaining faithful to the live experience. With more than thirteen musicians in attendance (including a five-piece brass section and superb violinist Rachel Hall), a huge instrumental set-up and David Longdon’s rich vocals rising over it all, mixing this music live or in studio can have been no mean task, but Aubrey succeeds on both counts.

In typical BBT fashion, the album comes with an impressive 40-page glossy booklet. It is a very high-quality product indeed. “A Stone’s Throw From The Line” therefore certainly is an indispensible item for any Passenger, but one feels that it would also make a very good purchase for any new fan looking to come to terms with BBT’s vast catalogue in a hurry, and I have no doubt that there are many.

A live album can be a quick and easy release with very little risk attached, or it can be a dangerous gamble, laden with the threat of possible disappointment. For Big Big Train, an independent outfit whose live performance was so sorely missed as to create hysteria for years, it is more likely to have been the latter. The August 2015 Big Big Train concerts were unforgettable, monumental events – a time of joyous and unprecedented celebration for Passengers. This release will have to present an exceptional live album for Passengers to feel that it rekindles the joy and experience of those three concerts. Does it succeed? I was there for all of them, and hearing this album took me right back to King’s Place, so take it from me – it does.

In a weird way, that seventeen-year wait was almost worth it.

The album’s full track-listing is: