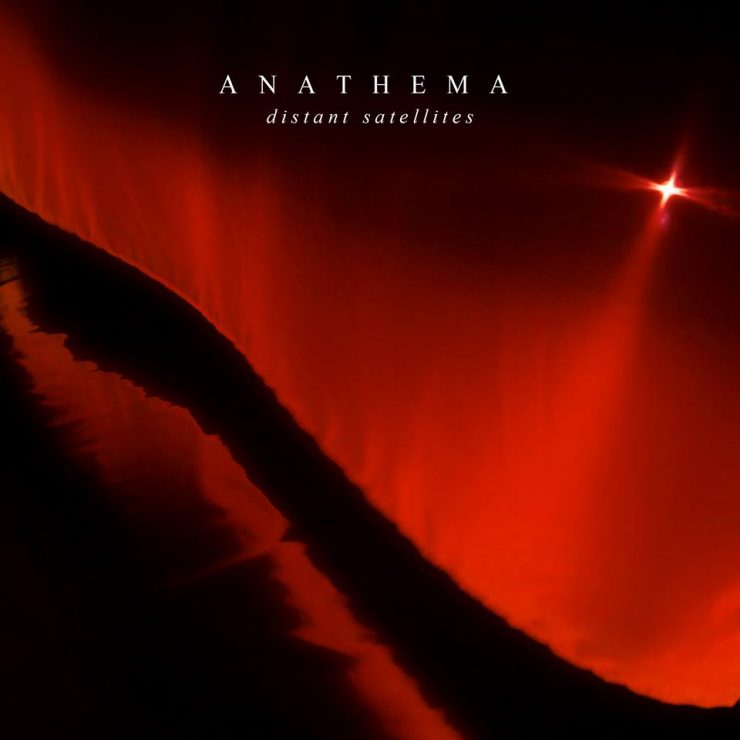 Anathema have a new album called “distant satellites” due out June 9th on KScope records featuring “The Lost Song part 3.”

A few months ago, I was fortunate enough to get a sneak peak of a few songs off the new album from Danny Cavanagh.  It was impressive then but the problem was I knew then that I still had months to go before I would get a chance to hear the rest, let alone those few songs again.  Having finally gotten a chance to hear the whole album, I can say it was totally worth the wait.  Over the last few albums, Anathema, have completely stretched the boundaries of their music, exploring new sounds, themes, emotional elements and more.  While they have a style and sound all their own, they find ways to reinvent themselves with each album.  “distant satellites” is no exception.

A third of the album revolves around what are called “The Lost Song, parts 1 ,2 and 3.”  The album kicks off with parts 1 and 2 consecutively.  There are similarities here with how the band began 2012’s Weather Systems with Untouchable parts 1 and 2.  “Lost Song 1” is an upbeat rocker in a uniquely challenging 5/8 time.  It is a hard beat to get a read on at first but kudos to the band for pulling it off.  In true Anathema fashion, the song revolves basically around one motive and continues to build on that brilliant theme until the final crescendo.  It kicks off with the drums and Vincent’s ever magnificent voice before filling in with the rest of the band.   Anathema are brilliant at taking a simple musical idea and building and building upon it until it sounds like a whole new song.  The songs are built on the emotion of the music, not the number of notes or parts.    The band have referred to this albuma s their Kid A, where Weather Systems was their OK Computer.  That might not be entirely the case, but there is a difference in terms of more simple production and more focus on the vocals.

“Lost Song 2” takes on a somber more ballad approach still building on moments from “part 1.”   Much like Pink Floyd’s “The Wall” had 3 parts for “Another Brick in the Wall”, but part 2 was the single, here “The Lost Song part 3” is the more obvious single out of the three.  The albums first single is one of the finest songs Anathema have ever produced.  It encompasses everything the band is about.  The song focuses strongly on the vocals with only a hammond organ as the main guiding musical element for the first half of the song.   There is more of a verse/chorus structure here yet the band still are able to build the song in to an epic track by the end.  Lee Douglas’s vocals on the 2nd verse and couple with Vincent help lift the song to its ethereal heights.

The albums 3rd track “Dusk” could have been on “We’re Here Because We’re Here.”  A brooding, midtempo rock track features explosive vocals from Vincent Cavanagh wailing about getting “Away from this place I don’t know, how did I get here?”  The song changes midway through towards a quieter piano passage before returning with the full band.   “Ariel”, the albums 4th track, is a beautiful ballad sung by Lee and Vincent together, who in tandem bring a emotional and graceful element to the music unparalleled in the genre.

There is a track called “Anathema” which is a huge epic ballad, while “You’re Not Alone” is an experimental track with few lyrics that repeat.  Probably the most rocking track on the album, it is another side to what Anathema bring as a group that are always willing to stretch their musical wings.  “Fireflight” is more of an instrumental interlude that leads into the albums longest track “distant satellites.”  The song is built around drum loops and samples, but is at the same time very progressive as it takes the listener on a journey musically eschewing any traditional song structure.

One of the most powerful songs the band has done has to be the closing track “Take Shelter.”  The song starts very tenderly and with some subtle sampling, builds over the main melody introducing more strings over more strings until it sounds like 10 full orchestras are playing.  The overwhelming emotion that comes from the production and mood of the track is reminiscent of the title track form Steven Wilson’s “Raven That Refused To Sing.”  Steven Wilson did have a hand in mixing this track so it is not surprising to feel his presence here.  The band have not made a song like this before and it is one that draws you in and entices you to listen over and over again.

Overall, the feeling from “distant satellite” is that this is still a band with much to say.  This album is quite an accomplishment musically but it is also great that a band like this exists to offer something original and unique.  They aimed to do something spectacular and most assuredly achieved that.

All songs written by Daniel Cavanagh, except where noted.