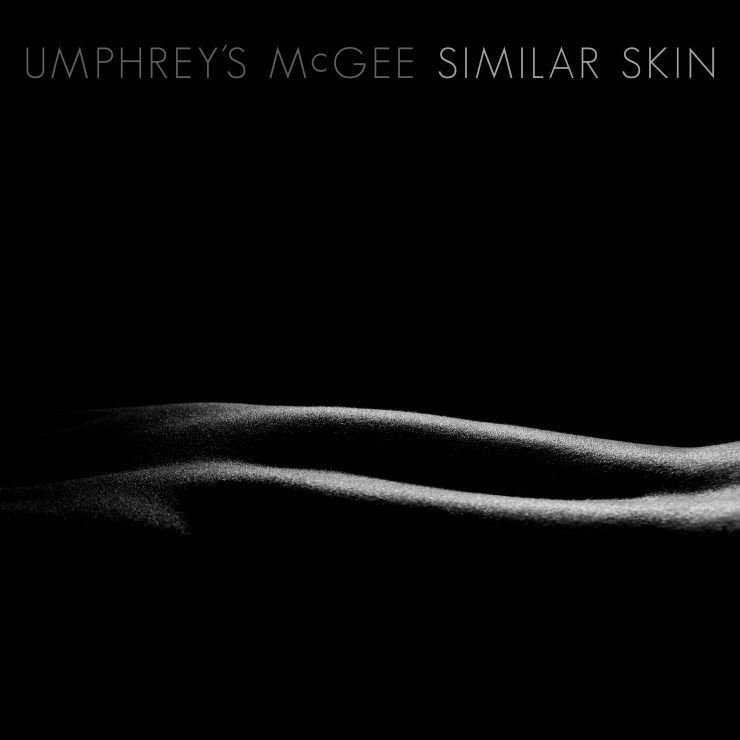 Umphrey’s McGee, Similar Skin, is the new album by the band, out June 10th, 2014 and features the tracks “Puppet String” and “Bridgeless”.

Umphrey’s McGee’s new album, Similar Skin, their 8th studio album, is something of a surprise from this “improg” band.  Mostly known as a “jam band” the group have never let that label stifle their willingness to explore new boundaries.  They have always had elements of Progressive rock in their music.  2009’s album Mantis contains the song with the same name, which is one of the best Prog songs to come out in the last few years.  On this album, the band make a deliberate attempt at putting their Prog rock roots front and center.  The songs are dymanic, heavy, jazzy, and full of guitar solos.  The album is comprised of many songs the band has been playing live for more than a decade.  “Bridgeless”, the album’s closing track and longest song has been performed over 250 times.  The band were also willing to keep the songs down in length and leave the jamming to the live performances.  The result is a fun, creative and amazingly well crafted album that could be on the year’s best list.

The album opens with the Rush influenced “The Linear”.  Drummer Kris Myers channels his inner Neil Peart and Stewart Copeland throughout the record but no more than on this song.  As on most of the album, this song does not have a traditional structure and in fact, is a dark and heavy opening track compared to the rest of the album.  Guitarist Jake Cinninger does a killer solo towards the end of the song sounding like Alex Lifeson.

The second track and 1st video is the more UM sounding “Cut the Cable”.  Here the band sound more upbeat and introduce some great vocal harmonies.  The heavy opening riff stands out here but the strong part of the song is the back-end of the song where the band introduce the chorus.  “Hourglass”, a traditional rocker, is as good a radio single as the band has written.  Even on this song, the guitar playing is precise and soulful.  There are elements of Def Leppards’ syncopated guitar riffs and dual solos here without sounding dated.

“No Diablo” is the one song that doesn’t sound like it fits on this rock album, but it is a welcome change. More of a bouncy piano song that would fit on older albums, the chorus here is one of the best moments on the album.  Adding a song like this album is what can make an album unique and more fun to listen to.  The next few songs beginning with “Similar Skin” and the awesome “Puppet String” showcase the Progressive side of the band.  Each song shifts through different styles and song structures, sometimes with bass as the lead instrument, sometimes with the drummer driving the song.  “Puppet String” is a great heavy rocker that is one of the highlights of the album.  Bassist Ryan Stasik’s finger tapping lead part through the verses gives the song the perfect mellow vibe that is the complete opposite to the heavy chorus and middle sections.

“Loose Ends” could qualify as the one power ballad on the album. Singer Brendan Bayliss shines on this track.  But it is the final song “Bridgless” that really makes this a great Prog rock album.  At 9 minutes (on the shorter end compared to the live versions), there are so many great instrumental parts that you lose where you are in the song.  All you know is that really rocks.  They even channel their inner Dream Theater towards the middle of the song.  The band really let loose on this song and show they are no slouches when it comes to playing.  Not many jam bands have the chops these guys have but the real difference is how to use them to craft perfect rock songs that are memorable and entertaining.  There are no shortage of fantastic vocal harmonies and melodies and you can get lost in the exquisite musical landscape that the band is creating.   I highly recommend this album, regardless of if you know this band’s work or not.

Released June 10th, 2014 on Nothing Too Fancy Music