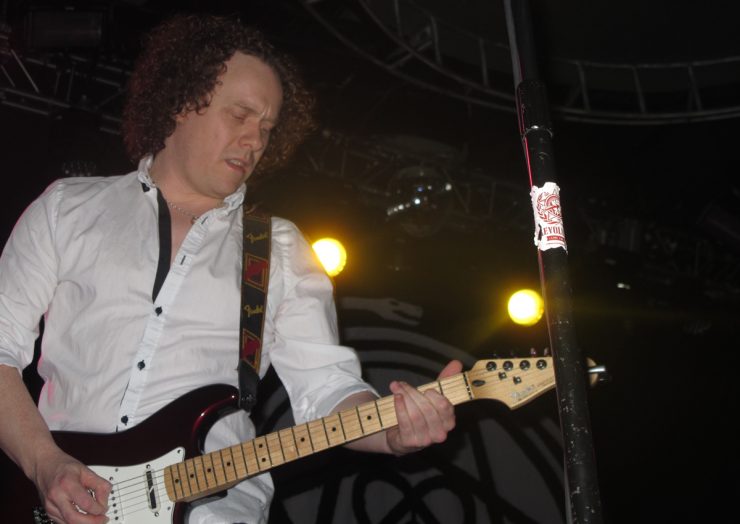 Anathema, from Liverpool, England, and coming off the heels of the Progressive Nation at Sea Cruise are on a brief run in the States supporting the Finnish band HIM.  At the same time, they have been finishing up a new album which they expect to be out sometime in June 2014.  We caught up with Danny Cavanagh from the band after a show in Ft. Lauderdale, FL and even got a sneak peek at the fantastic new album.


So how is the new album coming along?

>It’s finished.   We’re very pleased with it. It was a lot of work and we had to finish it while we were on the road.  But it went very well.   We insisted on the final result being the right one and we managed to get it done on time.

What can we expect on this one?

>I think it will take you by surprise towards the end. 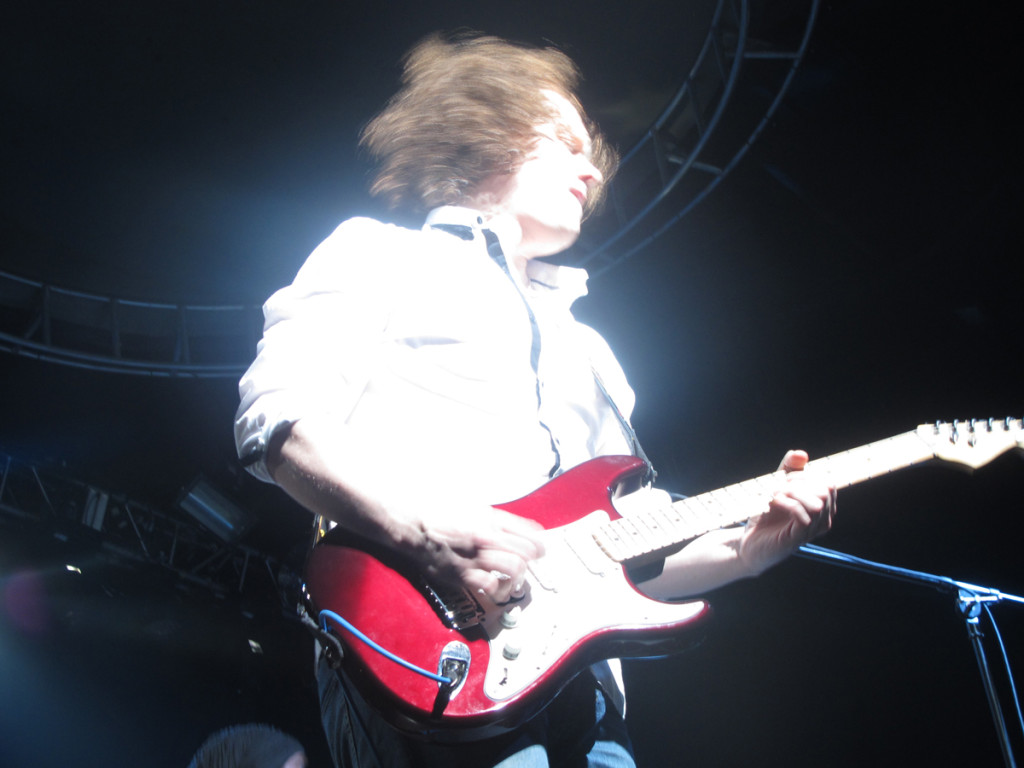 So I know this tour with HIM was a last minute thing.  Were you guys on the Prog cruise when you found out about this?

> I think we were in the studio when this was confirmed.  And it was a bit risky because we were still finishing the album, so we actually had to finish the mix of the album over the Internet with our producer Christer and Steven Wilson who mixed a couple of songs.  That was the only part we were unsure about; how is that going to work mixing from the Internet when we’re in America?  But it actually worked out because of an ingenious way of doing it that our producer did for us.  He streamed, in high quality, the mixes over the Internet and we worked it out over Skype.

Did it take a lot of time to fix any changes or suggestions you guys had?

> It took 2 days but because  Christer was unwell and couldn’t mix all of the songs.  It was only when I found out that Steven Wilson was going to mix those tracks that I didn’t worry about the mixes.   Steve came back after 6 hours after receiving the songs with an ingenious mix of those songs.  So that saved it really because I knew Christer could do it but if he couldn’t do it because of his illness we needed somebody as good as that and Steve stepped in and so it really worked.

How is it being in the States again for only the second time?

>It’s been great. Ville and the boys (from the band HIM) have been treating us really really well and they’re really kind to us and the road crew is kind and they give us time and food and space and good vibes, so it’s very enjoyable. 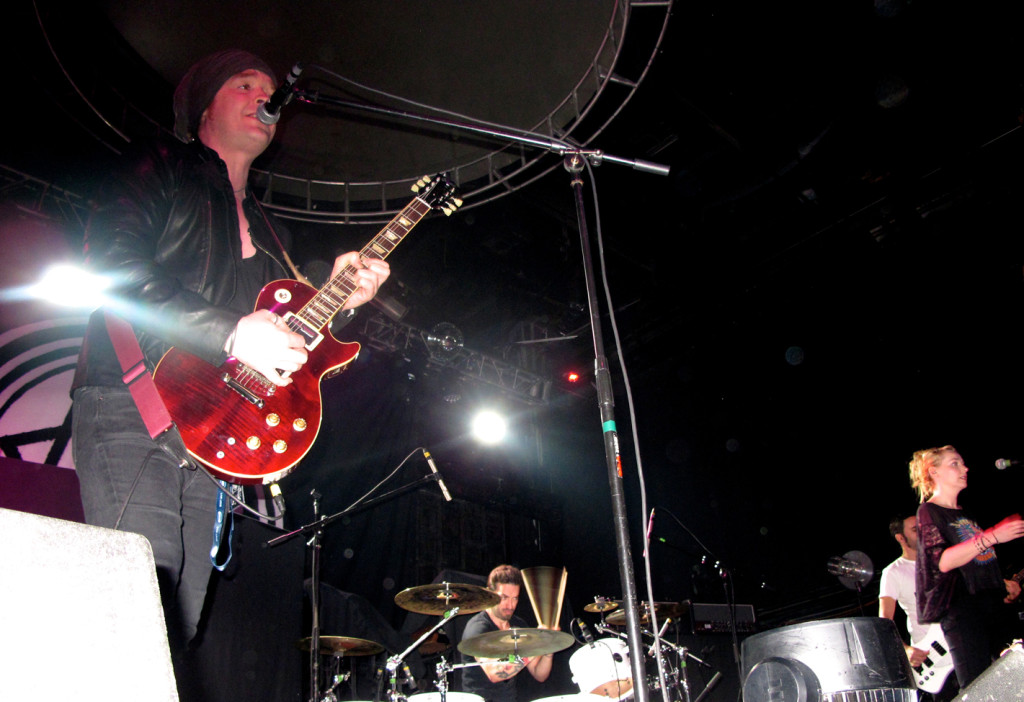 How has the U.S. audience been receiving you on this tour?

>We are making new fans.  But that’s what a support tour is all about really.  You play to people who don’t know you and that’s the idea.  There’s a few Anathema fans here too.  But you have to remember, Ville and the boys, they’ve had a gold record in this country, which is like 50 times as many as we’ve had sales-wise so it is another level.  But we are like an influence on them and Ville’s a fan and a friend so it’s great fun.  We get on there and we rock for 40 minutes and we make sure that we get them, we hold them, we take them with us and it’s working.

What was putting together the Universal live concert DVD like? It is such a brilliant concert.

>Nerve-racking.  Everybody was scared.  And so I made a conscious choice in the second song to deliberately, consciously enjoy it – take the moment in, stop worrying about making a mistake and you can see that it happened.  I just chilled out.  It was a great audience.  We knew it was being filmed and costing a lot of money and it had to be right and everybody felt pressure.  I just said to myself “I’m just gonna enjoy it.” I did.  And because of that, I was really able to go into the moment and take it all in.   It was the best show of the whole tour.

How did you enjoy the Progressive Nation at Sea Cruise?

>Everybody had a great time.  We got to hang out and talk to King’s X a little bit and connected with them and that was nice.

Did you know all the bands that were on the ship?

>Not really.  At least, I didn’t.  I certainly knew King’s X and that was who we all wanted to see because we were childhood fans of them.   They were the one.  If I was a fan of anyone on there, they would be the one. 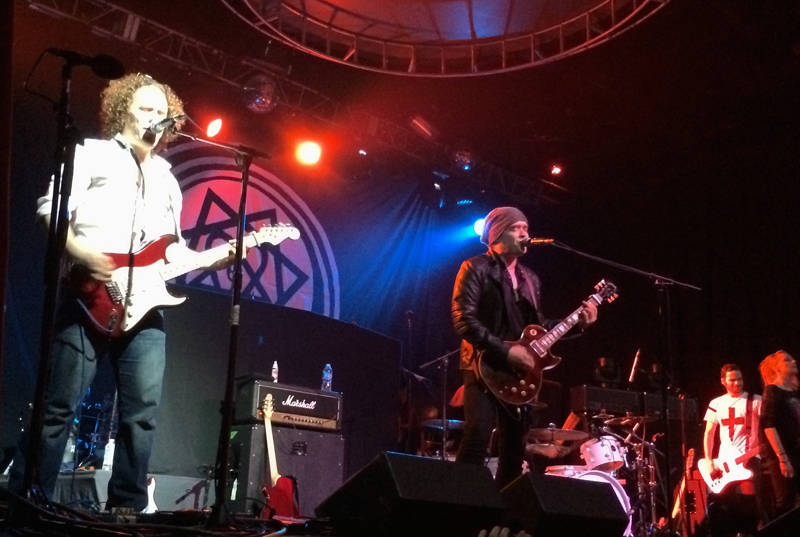 So how did you guys fall into the Prog label?

>It was somebody else’s decision (laughing).  I think it happened because record companies, the major labels, etc., won’t touch bands like us because of our history and our age.  Ultimately, there are only a set number of places we can go to.  We’re not metal anymore so where do you go?  OK, Prog then.

>I suppose it does.  The music is a bit progressive.  But it’s also like an alternative rock band really.   It’s basically industry talk.  That’s what that is.  Press and industry talk and I ignore most of that.

Was it a challenge for you guys to be considered Prog in the beginning?