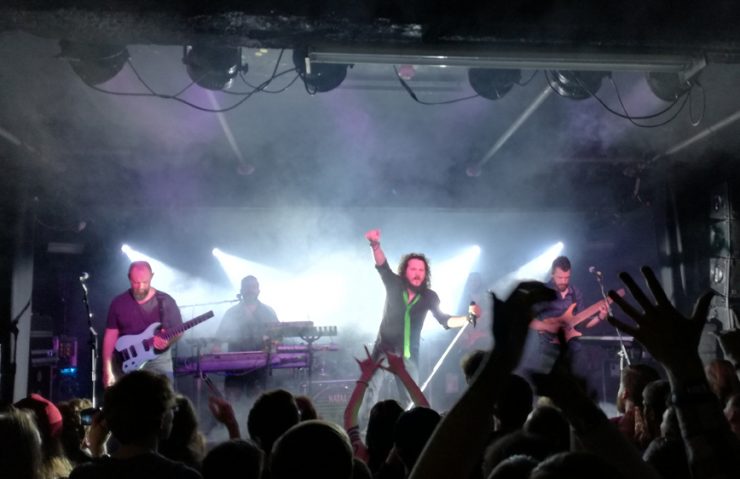 Concert: Haken w/The Algorithm and Next To None
Venue: Manchester Academy 3
Date: 03/24/17
Review by Marcus Chavasse

Haken have just embarked on a 10th anniversary tour of Europe with Next to None and The Algorithm. I had the fortune to see them twice as they made their way through the UK showcasing their entire career.

Pennsylvania’s Next to None are the first band to take to the stage in this intimate room in Manchester’s Student Union. They energetically power through four songs from their debut album ‘A Light in the Dark’ in their 30-minute set. As a band just starting out and playing their first shows in Europe, their youth is evident but it’s hard to deny that the band is full of creativity, strong musicianship and tight playing – we’ll probably be seeing a lot more of them in years to come.

Next up is The Algorithm from France, a genre-defying duo blending dance music and prog-metal to great effect. Their set is over before it’s begun in a blistering onslaught of electronic grooves and super heavy breakdowns, always taking unexpected twists and turns. Their inventiveness keeps the audience captivated and on their toes throughout a 45-minute set and they leave the stage to rapturous applause, safe in the knowledge that they’ve gained a few more fans tonight.

Now on to the main event – UK prog-metal standard-bearers Haken. They start early to cram as much music into their set as possible, but due to UK curfew laws they have to trim their set slightly (rest assured mainland Europe, you’ll be getting the full shebang!) That said, they still manage to get through a mighty amount of music.  They open with “Initiate” from last year’s ‘Affinity’, closely followed by “In Memorium” from ‘The Mountain’ – two powerful songs which showcase what Haken are all about: unparalleled musicianship and strong songwriting. Fan favorite “1985” comes next, with the audience singing along in fine form to even the most complex of riffs and cheesiest of guitar solos. As the band said: “Manchester…you put the ‘rowdy’ in ‘crowdy’!” Staying in ‘Affinity’ territory the band then play slow-burner “Red Giant”, an interesting but very welcome choice which really allows Ross Jennings’ skills as a vocalist to show – he, and indeed the entire band, are on absolutely top form tonight.

Now it’s time to take a ride through 2010’s ‘Aquarius’ in the form of a medley. The band selected highlights from almost every song on the album about a mermaid born to human parents who then cast her out, not realizing she may hold the key to saving the world – isn’t prog great? This monster of a journey is full of soaring choruses, and seemingly effortless instrumental sections abound, reminding us why Haken are so deserving of all the praise they get; if a band can produce music like this on their debut album, they truly are something special. To end the monster medley, “Drowning in the Flood” segues into the heart-wrenching final chorus of “Celestial Elixir” – tears are shed and evenings are made. This highlight of the night ends in a full-crowd chorus of woahs and suddenly, with barely a breath in which to recover, the opening riff of “Cockroach King” is being chugged from the iconic headless guitars of Charlie Griffiths and Richard Henshall. Watching them play, one wonders how on earth such music is written, let alone played note-perfect every night. “Cockroach King” is a joyous romp through full-band acapella sections and complex proggery, and has the crowd overjoyed and singing along to every word.

“The Architect” and “The Endless Knot” end the main set. These songs showcase a band at the top of their game. Diego Tejeida in particular shines on “The Architect” with his inspired use of iPad technology and the Seaboard to create epic soundscapes and play novel solos; “The Endless Knot” has drummer Ray Hearne playing as if his life depends on it and his innovative drum parts and integration of electronic sounds make for a high point of the whole show. The heaviest, most complex riffs of the night leave the audience drained, stunned and more than satisfied.

But that’s not all. They still have one last trick up their collective sleeves: a 20-minute long trick that goes by the name of “Visions”. It’s almost too much to handle, but Haken’s (arguably) best track leaves absolutely nothing to be desired. You simply can’t argue with this music. Haken combine skill, incredible songwriting, humor and humility to create an incredibly memorable night of the finest music this genre has to offer. Don’t miss out.

(In Nottingham they also played the suite of songs from ‘Visions’ The Mind’s Eye/Portals/Shapeshifter, a brief foray into the world of 6-string guitars for Richard Henshall. This piece of music has everything that Haken have to offer and was a shame not to see it in Manchester due to the early curfew.)