VUUR – ‘In This Moment We Are Free – Cities’ (Album Review) 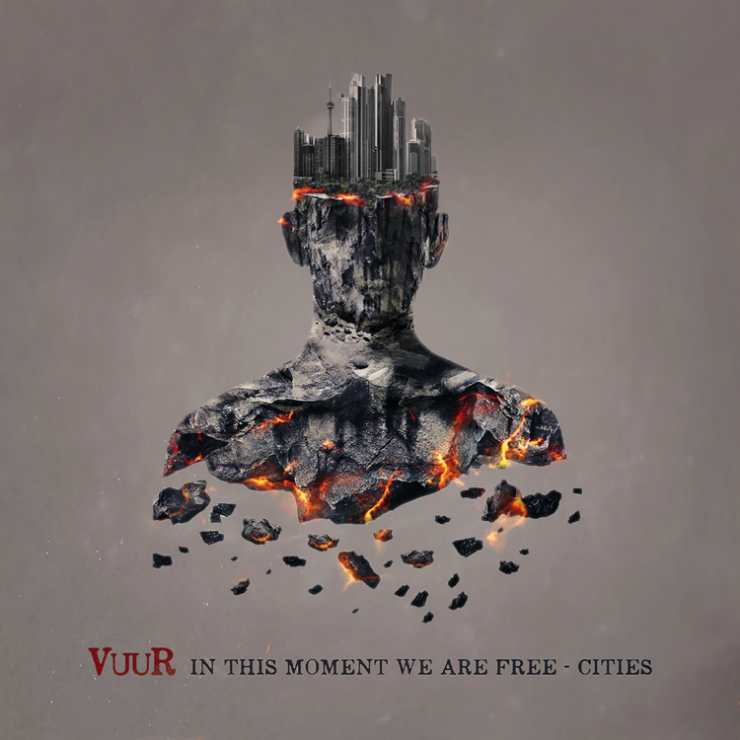 Review of the debut album by VUUR – ‘In This Moment We Are Free-Cities’ out on October 20th, 2017

With their debut album, Dutch Progressive Metallers VUUR (“fire/passion/drive”) have turned in a heavy, nuanced, and anthemic opening statement. For those who have been eagerly awaiting the day, I am pleased to announce that this is Anneke van Giersbergen’s heaviest work since The Gathering’s ‘Nighttime Birds’ in 1997. In addition to being wonderfully heavy, In This Moment We Are Free-Cities exudes all the maturity of the band’s extensive prior experience, while bursting with the enthusiasm of a ‘new’ band.

Of course, this isn’t quite a new band: VUUR is, with some important changes, an outgrowth from the live band that toured van Giersbergen’s The Gentle Storm collaboration with Arjen Lucassen. Unlike that project, which featured folky and jazzy prog that incorporated heavy elements, VUUR is a full-on metal band incorporating a progressive approach to composition. A loosely conceptual record, In This Moment We Are Free-Cities comprises songs “inspired by” cities van Giersbergen has visited, with the album’s title becoming something of a mantra as each song’s lyrics repeat the hope that “in this moment we are free.” The instrumental performances are powerful but upbeat, and Anneke van Giersbergen’s gorgeous voice is out front in every song. The vocal arrangements are complex and soaring, van Giersbergen’s voice frequently stepping up, up, up and then down again from line to line. Her harmonies are lovely as well, and while Marcela Bovio (of The Gentle Storm and a founding member of VUUR) is missed, van Giersbergen is the next best choice to harmonize with herself. There’s a lot more to this voice than is captured by Devin Townsend’s idiosyncratic use, and that “lot more” is all over VUUR’s debut.

Though “Anneke goes heavy again” is clearly the selling point for this band—and what a selling point it is!—drummer Ed Warby is a strong contender for most valuable player. His sensibility is flawless, and while he does play fast and loud with complicated rhythmic changes, he also always plays exactly what’s right for the moment, always complementing his bandmates and anchoring the energy of the songs. His grooves and fills flow as fluidly as does van Giersbergen’s voice. This virtuoso drumming is on display right from the first track, as Warby’s pounding blows open “My Champion-Berlin” before settling the rolling pattern atop which guitarists Jord Otto and Ferry Duijsens trade crunchy riffs and classic solos. The song is shot through with guitar solos that reference a variety of metal styles, including 70’s-inspired doubled leads and dirtier wah-wahed 90’s screachers. Throughout, bassist Johan van Stratum holds down a very low end that weaves between the guitar riffs, occasionally rumbling but always maintaining clarity. This first song encapsulates the overall approach of the album of taking a core melodic structure and giving each player space to add both nuanced accents as well as spotlight-grabbing contributions.

“Time-Rotterdam” introduces a more complicated rhythmic structure that shows off VUUR’s ability to set and then manipulate a groove. Van Stratum’s bass hits floor-vibrating notes as van Giersbergen’s plaintive wails segue to almost-choral vocalizations and again to the anthemic refrain of the song’s title. “Days Go By-London” features a similarly complex structure but leans even more into the lead guitars as the setting for a surprisingly sing-along chorus considering the foreboding set of lyrics. “Sail Away-Santiago” also incites singing-along in the chorus, but the verses adopt a heavier alternative rock groove with more playful vocal harmonies and the album’s most powerful performance of the album’s title lyric.

While balancing heaviness and clarity can be problematic, producer Joost van den Broek gets a very heavy low-end sound that remains clear and nuanced; while the overall effect is loud, no one element ever overpowers the others, and thus every member of the band is present and intelligible at every moment. In This Moment We Are Free-Cities is a great-sounding album that allows the great performances to shine through. The only (slight) drawback to the album is that it is comprised of a little more than an hour’s worth of mid-tempo metal, and so, depending on the listener’s mood, it might come off as a little plodding at times. Still, the performances are strong and the album does include a few change-ups with a power ballad (“Freedom-Rio”), a heavier alternative rock track (“Sail Away-Santiago”), and a singer-songwriter ballad (“Reunite!-Paris”).

The Gentle Storm live band was far too good to merely tour an album then dissipate, making the birth of VUUR almost a musical necessity. Thankfully, they’ve followed through on that promise with a killer debut album. In This Moment We Are Free-Cities is a must-listen just because it marks Anneke’s van Giersbergen’s return to a fully-dedicated metal band, but it remains a must-listen-again because her sense of melody, nuance, and composition is taken up by the whole band and carried home on every track. This is a wonderful debut that finds a “new” band in full swing right from the get-go.

Released on October 20, 2017 on InsideOut Music