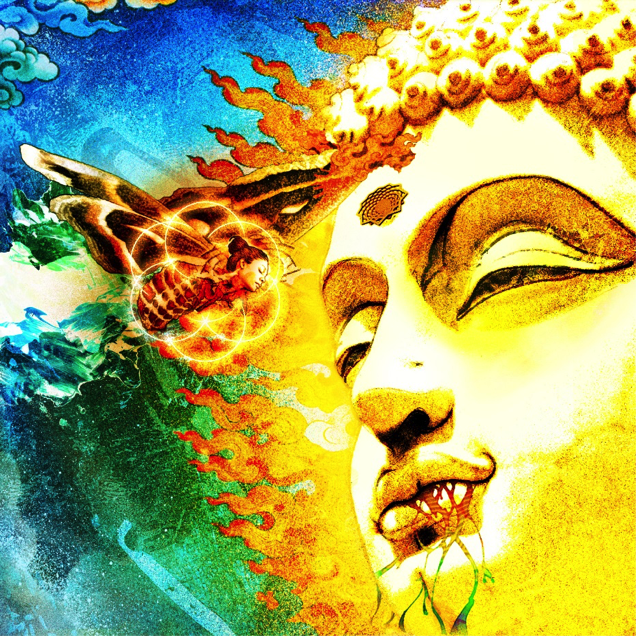 For those who may be wondering, the word Gungfly signifies “unsecure ground” in Swedish. For those who may be listening, however, ‘On Her Journey to the Sun’ secures Rikard Sjöblom’s position at the forefront of progressive composition and performance, and Rikard Sjöblom’s Gungfly clearly signifies scorching solos, frenetic rock and roll energy, nuanced lyrical prowess, and vintage organs and synths in abundance. This album is so full–of hooks, melodies, lyrics, guitars, keys, grooves, emotions–yet the band places every performance so precisely that at no moment do the words “noodly” or “indulgent” apply. Each song, and the album as a whole, flows so perfectly, and even the quieter moments propel the listener forward; ‘On Her Journey to the Sun’ is easily the most “gotta play it again” album this reviewer has heard thus far in 2017.

Opening mini-epic “Of the Orb” invokes the spirit of Genesis with its pretty Hackett-era acoustic beginning and a lyric that includes the phrase “cinema show,” but this prelude soon gives way to an old school 70’s classic rock twin guitar attack that announces Gungfly’s intention to explore a palette beyond paint-by-numbers prog. This track is highly energetic, with music and vocals running a tightly choreographed footrace to the finish. Indeed, here as elsewhere on the album, Sjöblom fits what should be too many lyrics into a song, but his approach adds its own kind of momentum. The lyrics don’t let up for a straight 90 seconds at one point, despite several musical changes during this stretch; the vocals thus form a bridge across these changes, Sjöblom’s refusal to stop for a breather imparting urgency to the lyrics. “Of the Orb” also announces that, for a band this stacked with keyboard players, we’re in for quite the guitar workout. After a few listens to the album, this reviewer later found himself with classic 70’s riffs winding through the brain, desperately trying to remember which Bob Seger or Heart song they were from. Neither, of course, for it was Gungfly, but the memory that coalesced around the riffs was quite vividly that of a classic rock FM station cranked on a sunny drive.

Title track “On Her Journey to the Sun” keeps up the energy, albeit in a more indie rock vein with shades of early Dave Matthews Band and a bit of jazzy lilt. Petter and Rasmus Diamant (drums and bass) shine here, perfectly accentuating Sjöblom’s lyrical approach by playing so much but never too much. “He Held An Axe” slows down the tempo but not the emotional fervor with its Joe Walsh-esque balladry (and now I really want to hear Rikard Sjöblom cover “Pretty Maids All in a Row”) before the band launches into another scorcher with “My Hero.” This track and “Old Demons Die Hard” exemplify Sjöblom’s left-of-prog-center lyrical approach that dwells so powerfully on the personal. The universal is in the particular, the microcosm is the world at large; by specifically describing his own feelings, Sjöblom taps into something universally human that rivals the scope of a big progressive concept. Who hasn’t been cut off in line and quietly demurred while screaming epithets in their own mind, or blocked painful memories of the sins of the dead (and the living) in order to conform to the glowing appraisals offered by others? The detailed description of mundane experiences actually spotlights the feelings of upheaval.

Musically, every song here is flush with superb performances. Especially noteworthy are the string contribution of Sjöblom’s Big Big Train bandmate Rachel Hall on “Over My Eyes” and the expansive band workout on “Polymixia,” which features more keys than Rick Wakeman could shake a Tony Banks at.  The lyrical and musical abundance finds its fullest expression in the climactic track “The River of Sadness.” Like it’s mini-epic counterpart at the album’s beginning, this big ending is energetic and hook-filled almost more than 12 minutes should be able to hold; this is sing-along stadium prog that again invokes the spirit though not the specific sounds of Genesis.  Neal Morse may be the progenitor of the modern progressive epic template, but Rikard Sjöblom has positioned himself as one of the architects of its bright future.

“All A Dream” then serves as a sort of epilogue, a quiet spoken-word reflection on what has just transpired. The meaning of the dream is clear: despite its origin, Rikard Sjöblom’s Gungfly is no longer a side project to the better known Beardfish or Big Big Train, but a bright star in its own right. In a year of many highly anticipated releases, ‘On Her Journey to the Sun’ is an album that may grab some people by surprise, but it surely will grab them and set expectations going forward.

Key Tracks: Of the Orb, On Her Journey to the Sun, My Hero, The River of Sadness