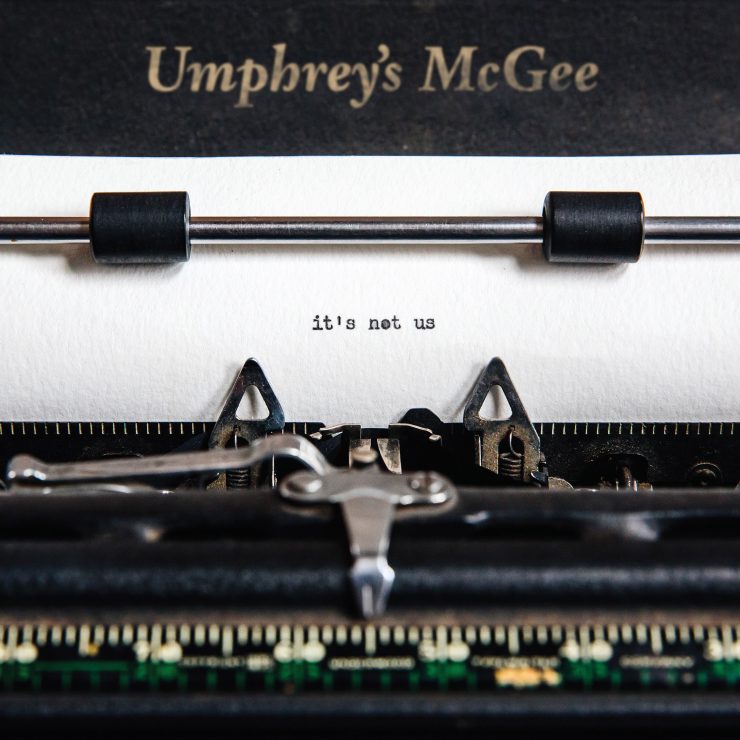 Umphrey’s McGee are somewhat of a secret in the progressive rock world. In fact, most prog fans do not know of this band or might know of them as a jam band. Their fans are largely the same as bands like Phish and The Grateful Dead. They play festivals where you are unlikely to find a Dream Theater T-shirt. But the surprise is that behind the image of this “jam band” lies the soul of a prog rock group. These guys can play with the best of them. And they have displayed these skills on occasion on previous albums like Mantis and Similar Skin. But with their 11th studio album It’s Not Us the group unleash their progressive rock skills to the fullest for their most exciting and consistent release yet.

The band have been around a long time, forming in 1997. They have built their reputation on their live shows, which are anything but predictable. They are known to play marathon length shows, mixing in covers, mash-ups, extended songs, brand new songs, or whatever they feel like playing that night. No two shows are the same. The accompanying light show is magnificent. However, on their studio albums, they are able to present concise, accessible versions of songs that, in some cases, they have been shaping and perfecting over many year at their shows. Some of the songs on this new album have been live staples that fans know well, but have yet to be on an album.

The opening track “The Silent Type” is one such song, based on a six-year-old jam known to fans as “Cigarette Cables.” The song is a perfect kick off to the album laying a rock groove with a raucous chorus. This is a rare perfect single for a group that could care less about having one. Things get interesting immediately with the second track “Looks,” a groovy prog-funk track with mixed tempos and thumping bass lines. There is even a moment that bares similarities to a Tony Bank’s Genesis keyboard breakdown. This is a fun track and one any prog fan would appreciate. From there the album continues to showcase the band’s ability to find home within any style. Third track, “Whistle Kids,” is a pure bluesey number, while “Half Delayed” is a 90s alternative pop track.

Things kick into high gear with the 5th song, “Maybe Someday,” the group’s dive into progressive rock. All the elements are here, the killer chops, time signature changes, solo breakdowns, and the explosive fast-paced ending complete with finger tapping. Sitting back listening to this one, you might find yourself doing a double take, wondering ‘what in the world was that?!’ Next track “Remind Me” gives off the suggestion that perhaps we are heading back into jam territory with its acoustic guitar groove and mystical breakdown in the chorus. But before the listener can get too comfortable, the band dive straight into prog metal for perhaps the highlight of the album. This is full-on double bass, guitar chunk shred, and it doesn’t let up for the remaining 5 minutes of the song. Fans of the band have heard this song for years at live shows, but if you are new to this band, you simply do not see this coming.

Thankfully, the listener is given a chance to breathe with the acoustic ballad “You and you alone,” a beautiful track that just adds another great element to this already magnificent album. But wait, there’s more, from the harmony-filled “Forks” to the jazz track “Speak up” which features a brilliant horn section, and the straight rock of “Piranhas.” Another impressive prog metal number “Dark Brush” closes out the collection, taking the band in a unexpected darker vibe, with dissonant dual guitars and Metallic-esque riffs. Didn’t we just hear horns two songs ago?

Some people like their bands to have one style and do that well. Umphrey’s McGee instead follows in the line of bands like Queen who could do anything and excelled at everything. The band has made what might be the its best album with It’s Not Us and has set the bar high for 2018.

its not us prog rock umphrey's mcgee