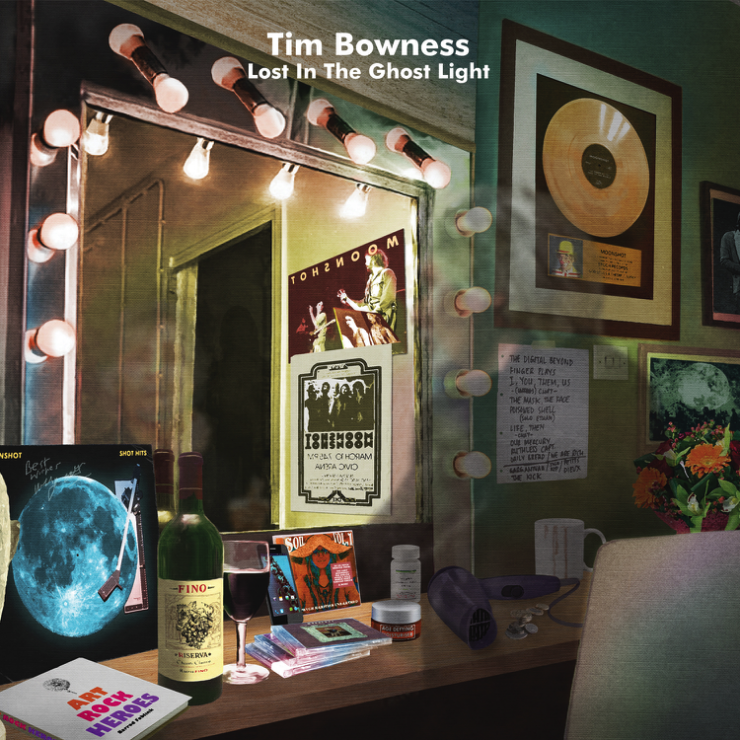 “Some are born to move the world/To live their fantasies/But most of us just dream about/The things we’d like to be/Sadder still to watch it die/Than never to have known it” (Rush, “Losing It”)

With his brilliant new album, ‘Lost In The Ghost Light’, Tim Bowness explores an option perhaps overlooked by Mr. Peart: to have moved the world, lived the dream, to watch it die, and to know that it was, in large part, a sham. What is it like to have been a success, but to look in the mirror and see oneself as a failure?

The album follows an Aging Rocker (bandleader of a band called Moonshot) across dressing rooms and stages, casting an unrelenting, judging eye on his soul (or, secret lack thereof). Memories, fears, and regrets all make an appearance, each presented in unflinching second-personal language; this is a one-sided interior dialogue, and the Aging Rocker is not particularly kind to himself. However, Bowness’ restrained, almost-spoken vocals present everything so matter-of-factly—with only the occasional hint of a sneer—that pity and sympathy seem inappropriate. After all, there’s no hint that we are listening to an unreliable narrator. If the Aging Rocker chose glitz and glam over substance, and loved applause more than art, then that was his choice. It is what it is, and he is who he is. The narrowly-focused narrative is bit of fresh air. While robot alien apocalypses, environmental disasters, and literary adaptations supply a fun and legitimate canvas for conceptual albums, it’s nice to hear something a little more human with a lowercase ‘h’ that doesn’t take ‘Humanity Itself’ as the subject.

Musically, the focus throughout the album remains on Bowness’ vocals and the rich bed of keys. And there are a lot of keys, strongly reminiscent of Tony Banks’ work on ‘…And Then There Were Three’ and ‘Duke’. Bowness mostly sidesteps the busier side of prog virtuosity in favor of layers of different key sounds, including Moog synths, bright piano, Hammond, and various blips and bloops. Tasty kit work and lyrical fretless bass lend more than a hint of jazz to the rhythm section, while the guitars tend to add texture, such that the few times a solo cranks up, its impact is felt doubly. ‘Rich’ is the key descriptor for these arrangements, with the richness enhanced by Steven Wilson’s immaculate mix that simultaneously evokes late 70’s progressive music and creates a spacious, clean sound that few others have approached, in that decade or since.

“Worlds Of Yesterday” opens the album with this lush but subdued tone, trading off between acoustic guitar, ethereal electric leads, and myriad keys accents. Ian Anderson’s flute makes its first appearance here, providing a perfect marriage between airiness and earthiness. The second track, “Moonshot Manchild” provides more detail to the story, highlighted by a second half led by a gorgeous synth sequence that would please any Steven Wilson fan. “Kill The Pain That’s Killing You” finds the Aging Rocker on stage strutting his stuff, killer rock star guitar solos abounding to hide the broken emotions. The guitars are almost upstaged by a rhythmic, percussive string section before a phased-out electric solo steals the spotlight again. There’s so much to love in the arrangements on ‘Lost In The Ghost Light’, from the vintage synths to the sinuous bass and tone-perfect drum kit, but the orchestrations really push the album over the top. “Nowhere Good To Go” sounds like something Sinatra might have sung in the late 60’s, and the strings are absolutely gorgeous, giving Nelson Riddle a run for his money.

While each song develops the lyrical theme from a slightly different angle, “You’ll Be The Silence” encapsulates the Aging Rocker’s situation: “You caught the music of the moment by accident/You caught the moments in the music by chance/You would love, oh how you’d love/Oh how you’d love/To do that now.” One of two longer tracks on the album, this sprawling musical space highlights the growing loneliness and insignificance of the fading star. “You Wanted To Be Seen” continues in similar fashion, with a reminder that the Aging Rocker was once driven by some kind of genuine inspiration, but traded it for the illusion of The Crowd’s approval. After a more somber beginning, the second half of the song takes a darker, up-tempo turn that practically screams “Rutherford, Banks, and Collins” in the best possible way.

Tim Bowness has set an early high water mark for symphonic progressive rock this year. ‘Lost In The Ghost Light’ works well for the car, but it rewards repeated listens through a good pair of headphones. The music is lush, the mix and artwork perfection, and the theme is tight. There’s a lot of great progressive music available these days, but this is one to not only not miss—move it to the top of your ‘to listen’ list.

Key Tracks: Kill The Pain That’s Killing You, Moonshot Manchild, You’ll Be The Silence, You Wanted To Be Seen