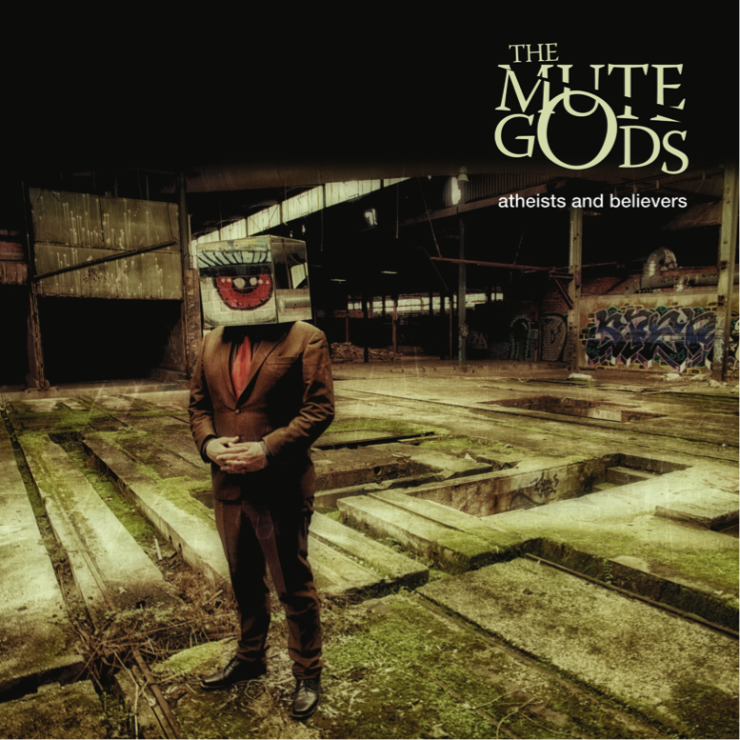 Review of the third studio album by The Mute Gods – ‘Atheists and Believers’ out March 22nd, 2019.

The Mute Gods, the trio spearheaded by bassist extraordinaire Nick Beggs, and featuring keyboardists Roger King and drummer Marco Minnemann, has been in existence for a relatively short period of time. Since launching in 2014, the band has released two critically acclaimed albums and now aim to release their third offering, Atheists and Believers on March 22nd.  For those not familiar, the seeds of The Mute Gods’ genesis were sown by Beggs after InsideOut’s Thomas Waber suggested that Beggs assemble and front a new group. While Nick was initially wary of this idea (“who wants to hear what I have to say?”), he eventually conceded, and began to form what would become The Mute Gods. He first enlisted the services of colleague keyboardist/guitarist Roger King, with whom he’d worked alongside as a member of Steve Hackett’s band, to collaborate on this new project. Drummer-extraordinaire Marco Minnemann, who toured with Beggs as a part of Steven Wilson’s group, seemed like the obvious choice to round out the lineup of the newly-born supergroup.

The Mute Gods released their debut effort, Do Nothing till You Hear from Me, in January of 2016. It’s a really great record from start to finish, the titular track to the album being particularly noteworthy. Roger enters with an eerie, frantically-played arpeggiated synth riff, then it transforms into a bass and drums-driven tune, albeit retaining the originally ominous tone of the cosmic-sounding introductory riff. Sonically, it would fit perfectly on a 90s or 00s Rush record with Geddy-esque bass playing and vocals from Beggs, and delectably bizarre-sounding slide guitar work from Roger. Marco’s drumming is brilliant as usual, yet tastefully understated. Two other extremely skilled, highly respected prog drummers, Gary O’Toole and Nick D’Virgilio, also contributed drum tracks to songs on the album. The Gods would eventually, and deservedly, be honored for their work when they received the ‘Vanguard’ award at the Progressive Music Awards in 2016.

Their sophomore offering, Tardigrades Will Inherit the Earth, was released in February 2017. The title track to the album, one of my absolute favorite Gods’ tunes, is a definite highlight. Featuring a predominately dark, electropop sound and sprechgesang vocals from Beggs, it resides in a stylistically-similar vein to that of Gary Numan. A music video for the song was released, with Beggs fixed in the foreground providing a dubious sign language interpretation/narration of his lyrics, whilst in the background, ironically-colossal tardigrades (a microscopic invertebrate animal known for its hardiness and odd appearance) armed with laser cannons are in process of inheriting (usurping control of) the earth. Very humorous, might I add. Highly recommend you “check it” out.

The concept of the new album Atheists and Believers is best explained by Beggs on the band’s website: “The album’s key message is that we now empower stupid people and don’t listen to educated, informed experts anymore because truth is no longer fashionable. We must change this course as a species or we will die.” Although Beggs’ beliefs do not always align with those of mine personally (particularly with regard to religion), I do respect him for expressing them without censorship. Beggs is an unapologetic misanthrope, and is deeply cynical of politics, religion, and the human race, in general. This unbridled animus is the impetus which fuels the majority of his lyrics and music on this and previous Mute Gods’ work. In contrast, Beggs reveals a more reflective and contemplative side that shines through on several other songs on the album.

Atheists and Believers kicks off with the title track, and it doesn’t disappoint. The song opens ominously, then quickly morphs into an almost peppy pop song from that point forward, featuring a catchy vocal refrain in the chorus. Beggs is a veritable master at writing these types of hooks. I love his utilization of pop and slap bass in this tune. Next to follow is One Day, which features iconic Rush axeman, Alex Lifeson as a very special guest. Commencing with layered vocal harmonies over an acoustic 12-string melody, the song initially has an calm, ethereal feel. Once the drums kick in, a heavier, straight-ahead 4/4 rock beat is employed, albeit played at a slower tempo, so that it chugs along, but in a satisfying way. A keyboard arpeggio from Roger continues nearly unabated throughout. Alex plays a hauntingly beautiful slide guitar solo, which is immediately followed by several rapid drum roll fills by Marco. A superb track overall. I absolutely love the collaboration with Lifeson, and am beyond ecstatic to hear him playing and recording more fantastic music after the retirement of Rush.

“Knucklehed” is, according to Beggs, “a song for humanity because we are all knuckleheads. I am not a fan of the human race: I believe that we are too pernicious to venture out beyond our solar system.” Despite Beggs’ overt expression of disdain for mankind which gave rise to the lyrics, the song is ironically upbeat musically. It contains lots of funk-inspired bass work (akin to that of Flea) mixed with extraterrestrial keyboards. The substantially-heavier, guitar-laden “Envy the Dead” ensues. Beggs describes the lyrical inspiration: “There are many people who would rather die than face the world. This song is written from that perspective.” It’s a no-frills rocker that makes you want to pump your fists.

An entirely instrumental track, the aptly-named “Sonic Boom” hits next. Craig Blundell, the drummer of Steven Wilson’s band, with whom Beggs has worked with for some time, cameos on this tune. Beggs “wrote this piece based around his (Blundell’s) original drumming style.” Blundell relies on heavily-syncopated drumming behind Roger’s spacey keys and Beggs’ Chapman Stick tremolo tapping. The song even includes a reggaeish part, which lends to the uniqueness of the composition.

The next two songs on the album are slower, pensive pieces of music. “Old Man” is about confronting mortality. The lyrics allude to old men in a bar drinking together, waxing nostalgic about life while awaiting imminent demise. For this song, Beggs composed a beautiful Celtic melody, played on acoustic guitar with flute accompaniment. “The House Where Love Once Lived” is Beggs’ take on long-time marital bliss with his current wife, the myriad fond reminiscences and significant times they shared in their home, and how once they are gone, subsequent residents will be completely unaware of happenings that previously transpired there. The melody of this tune is evocatively alluring, and the whispered vocal, “the house where love once lived” is especially poignant and chilling.

“Iridium Heart” begins with a spine-tingling, mysterious intro synth that Beggs explains is “supposed to emulate the opening fanfare at the Berlin Olympics, a herald marking the arrival of a new social structure where Nazis are tolerated and compete for gold in a world out of step with what’s acceptable.” An effect is added to Beggs’ vocal, rendering it to be robotic-sounding, quite apropos considering that Nazis were mindless, inhuman machines incapable of compassion or reason, and incomprehensibly evil. Per Beggs, “Twisted World Godless Universe” “represents the battle between light and dark in a man’s soul. As in my own battles with faith and disbelief, I felt the need to show those opposing sides.” Fans with a prog sensibility will especially enjoy both of these tracks.

“I Think of You” is the final song on the record. An instrumental track, consisting primarily of piano and some horns, it serves as a fitting musical tribute to Beggs’ late mother, who passed away far too soon at the age of 38 (Beggs was only 17 when she passed). Wind chimes can be heard sporadically throughout the tune. I prefer to think of the chimes as symbolic of his departed mother’s spirit, stirring the winds from beyond the grave to communicate with her beloved son.

Over 35 years have elapsed since I first became aware of Nick Beggs’ music as a member of Kajagoogoo, but the superficial pop stylings that he his pop group offered have evolved into something much deeper and more thought-provoking with The Mute Gods, and the level of Beggs’ musicianship has increased exponentially with the years. Along with King and Minnemann, Beggs has pieced together quite the supergroup. The Mute Gods are truly a musical juggernaut, and with Atheists and Believers have given us yet another remarkable work which I highly recommend.

Released on March 22, 2019 on InsideOutMusic
Key Tracks: Atheists and Believer, One Day, Envy the Dead