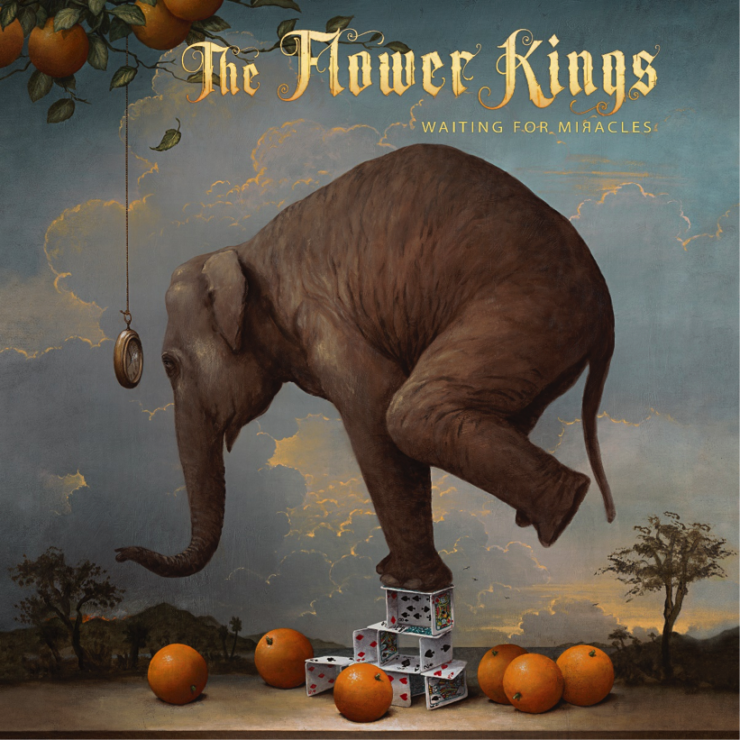 Review of the new studio double-album from The Flower Kings – ‘Waiting For Miracles’ out on November 8th, 2019

What’s in a name? Family, that’s what. In the musical house called The Flower Kings, there have been 14 family-members – quite a revolving front door. The band has in recent years not been a completely settled home, and there has, for some time, been confusion about its status. This confusion was caused by personnel departures and public statements, and was exacerbated in 2018 due to a release under the name ‘Roine Stolt’s The Flower King’. This was (despite the name) Stolt’s third official solo album, ‘Manifesto of an Alchemist.’ Thereafter, ‘Roine Stolt and Friends Play The Flower Kings’ was presented (purportedly Stolt performing solo with backing musicians), culminating late last year in ‘The Flower Kings Revisited.’ Only in July 2019 was the word ‘Revisited’ removed (together with the confusion), and it became clear that the new line-up, with legendary keyboardist Thomas Bodin and drummer Felix Lehrmann absent, was intended to be the official new incarnation of The Flower Kings. With the release of latest album ‘Waiting for Miracles’, Stolt has now discarded any confusion – this new line-up is unequivocally billed as The Flower Kings (TFK).

There is a lot to unpack in this double album. It is highly eclectic, versatile and diverse. But it is at the same time, consistently and undeniably The Flower Kings, precisely as their hordes of fans would want to hear them. Stolt is still the head of this household – just with some new family members in the kitchen. That very particular and signature sound that is TFK is ever-present, but experimentation and adventure are also to be heard. Is it a concept album? Well, not ostensibly, but it certainly does revisit a central theme with regularity. Is it Prog? Absolutely. Does it conjure Prog’s heyday in the 1970’s? More than any other album I have heard this year, to be honest. More to the point: is it The Flower Kings? The answer is – most definitely.

The album starts strongly, finishes interestingly and explores a veritable kaleidoscope of avenues in between. With 15 excellent songs, existing TFK fans will be well pleased by this album, and new fans will also be attracted.

Opener ‘House of Cards’ is a gorgeous piano melody that gives way to ‘Black Flag’ – a clear sonic signal that Stolt and his cohorts intend to maintain the unique recipe that has produced so many varied delights under The Flower Kings name. Politics and social commentary seem to bring out the best in Progressive musicians, and ‘Black Flag’ is an example of that. Majestic chord progressions and a fairly anguished melody comprise a statement that TFK have no intention of relinquishing their mantle of European Melodic Prog leaders.

‘Miracles for America’ is the ten-minute core of the first disc, and it is magnificent. From Kamins’ stabbing opening chords, to DeMaio’s classy punctuation, it is immediately obvious that this piece will be a winner. It may show the rockier, less ambient side of TFK, but, with its crunchy, Yes-like progressions and sounds, the song reminds us why TFK is credited as one of the bands responsible for the global revival of ‘70’s-style Prog. A composition like this could easily have raised an album like ‘Tormato’ to a higher level of popularity. However strong the influences, Yes fans in particular will be grateful that there is a band making this type of music to such a high quality in 2019.

‘Vertigo’ is typical TFK, with Fröberg’s beautiful voice fully featured. Reingold’s signature fretless bass, so prevalent in TFK’s vast body of work, remains extant in this piece. Sweet harmonies abound, and there is a scalpel-like guitar solo. In particular, tasteful and understated keyboard parts, mixed under Stolt’s guitar, indicate that Kamins is more than suitably placed in TFK.

‘The Bridge’ begins with some of the most stunning but simple piano chord progressions you have ever heard. Ethereal and mystical, this is one of the most beautiful melodies that TFK have ever produced, and it gives way to a full guitar instrumental with Stolt at his magnificent best. The words ‘Waiting for Miracles’ are whispered rather than sung, as a refrain to end the piece. An outstanding composition, ‘The Bridge’ is a highlight on the album and in TFK’s catalogue.

‘Ascending to the Stars’ is utterly cinematic. It features a bombastic slow chord progression with strings and a big choir that sounds like an army marching to war. While your ears are listening, your eyes will be searching for the screen. With lots of instrumental experimentation, ELP are channeled at times, but the track goes even further and will test your Prog listening skills to the extreme.

‘Wicked Old Symphony’ is good old pop-rock in 4/4 timing, and TFK do it just as well as anyone. A commentary on crime and evil, the song is a welcome respite from the bombast of the previous song, but the simplicity of the composition belies its complex vocal arrangement. With massive TFK harmonies, no other band can make straight-ahead rock sound quite like this. Wonderful.

‘The Rebel Circus’ opens with what could quite evidently have been the sounds made by the poor elephant on the cover. A driving 70’s Prog instrumental, keyboard and guitar flourishes permeate the song, and, rightly or wrongly, it feels like the band were all in one room playing this complex piece together. If that was indeed the case, audiences are in for a real treat when this edition of TFK hits the tour circuit.

‘Sleep With the Enemy’ has a typically soporific TFK intro and Stolt’s and Fröberg’s voices trade anguished stanzas, both in fine form. Reingold and DeMaio carry the verse with odd staccato patterns, showing that they have become a more than compatible rhythm section. No-one provides yearning, tragic melody quite like TFK, and you can expect it in spades from this song.

The first CD closes with ‘The Crowning of Greed’ – a sumptuous piece of guitar-based majesty that will satiate all those hungry for another emotive Stolt guitar solo, while expressing an anguished resignation at the state of the planet. Sadness abounds.

CD2 begins in a more positive mood with ‘House of Cards Reprise’ – a brief but celestial re-working of the first disc’s opener. Something of a stylistic departure follows with ‘Spirals’. It is an ambient composition with lots of sound effects, studio wizardry and programmed percussion, and is more pleasing than you would expect, especially when the full band kicks in. It fades out with a lonely, barely audible voice, singing ‘Save your miracle for America’, thus re-visiting the central theme once again.

‘Steampunk’ sounds like anything but what its name would suggest. The wailing guitar and keyboard interplay are impressive, but the high point is reached when Fröberg’s vocals come in. The line ‘Guide me through the darkest borders’ is sung with such emotion as to evoke true grief in the listener.

Thankfully, these masters know how to resolve the listener’s emotions to a happy place. ‘We Were Always Here’ is an up-beat, jazzy piece of joy, with marimbas, fretless bass, cheerful keyboard runs and warmth in bucket-loads. The best way to describe it is musical sunshine, steered by sunbeam vocal harmonies that no other band can deliver in quite the same way as The Flower Kings. This is ‘that’ song – the one that you will put on your new TFK playlist and play to people when you want to introduce the band to them. It is seven minutes of catchy TFK heaven, after which the album ends with ‘Busking At Brobank’ – a one-minute bit of studio nonsense to remind us of the band’s quirky sense of humor.

Lavish, kinetic, dynamic, majestic, catchy, complex, desolate, happy and yes, revitalised, ‘Waiting For Miracles’ is all you would expect from a genuine return to form by one of Prog’s most influential and monumental names. Some pre-eminent members of The Flower Kings family may have been left behind for now and will undoubtedly be missed, but with ‘Waiting for Miracles’, Roine Stolt has firmly put The Flower Kings house back in order. This is a release worthy of the name.

Released on Nov. 8th, 2019 on InsideOutMusic