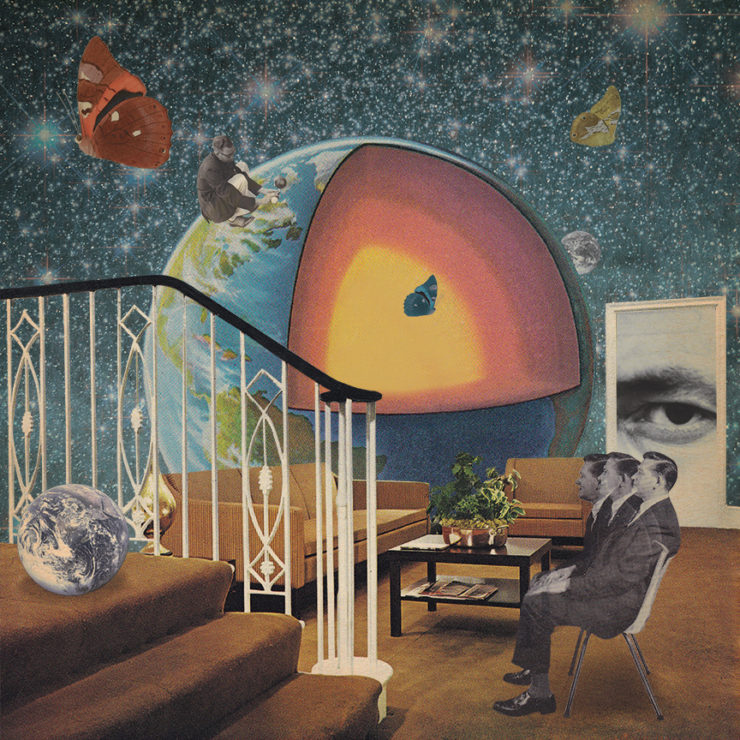 Review of the new Thank You Scientist album ‘Terraformer’ out June 14th on Evil Ink Records.

It is always a pleasure and a challenge to write a review for a band like Thank You Scientist. The New Jersey self-proclaimed “eclectic, vibrant and well-hydrated progressive rock band”  are releasing their long awaited third studio album, Terraformer, this month. With this release, the band has assembled a collective of songs which deliver 84 minutes of excellent music (this means a double CD for those of us stubborn physical media cavemen, as opposed to the purely digital download generation at which case it is just 13 tracks which take up your ‘cloud drive’ data). To their loyal fans, this review would be short and sweet, and simply state “TYS sound is alive, well, creative, and does not disappoint.” To those who are not familiar with “TYS sound,” then hold your breath, quickly read thought the rest of this review, and expect to hear a very unique sounding band who thrive on great song writing centered around melodies and hooks while blowing you away with their superior musicianship.

This album sees the return of founding members Tom Monda and Salvatore Marrano along with the newer members Joe Fadem (drums), Joe Gullace (trumpet), and Sam Greenfield (sax), round out the band with returning members violinist Ben Karas, and bassist Cody McCorry. Even with a lot of newer musicians, the “TYS sound” which live audiences have been overwhelmed with since the days of Maps of Non-Existent Places, is unquestionably steady and fresh. Also, buyer beware, their sense of humor has no end; as evident on their website and videos.

“Wrinkle” is a great way of introducing the listener to the unique way TYS combines their instrumentation to create their sound. This brief 2.5 minute instrumental is an appetizer leading into the band’s first release “FXMLDR”. This 8 minute song shows off Monda’s and Karas’ quick work of notes on guitar and violin respectively. Marrano’s vocals continue to be a staple of the TYS sound as well as the great melody during the chorus. Greenfield’s sax solo is perfectly supported with a McCorry and Fadem rhythm foundation. “Swarm” strongly follows with another flood of terrific guitar work and great vocals. The funk side is displayed on “Son of a Serpent” with one of Monda’s highlight solo’s which make you appreciate his guitar hero skills.

We are then given a breather with “Birdwatching’”cool electric drum vibe and smooth bass and guitar line. This leads to one of the album highlight’s, the 10 minute “Everyday Ghosts”. This songs brings together all the TYS ingredients to deliver the melodies, chorus, hooks, and instrumental prowess the fans have come to expect. Then the instrumental “Chromology” brings the first CD to a close with the TYS brand of experimental sounds which pleases those fans of jazz, fusion, rock, and metal, all at the same time. On to disk 2 (or track 8 for you technology millennials).

“Geronimo” starts as a mellow and melodic piece which continues to build as it climaxes with the final chorus in full rock mode. “Life of Vermin” is another solid delivery of musicianship accented with a short acoustic interlude which leads to a Snarky Puppy like instrumental breakdown. ‘Shatner’s Lament’ has Gullace playing a soft melody over some smooth jazz drums and bass for a one minute transition. This leads to another highlight in the very dynamic “Anchor”. Marrano is at his best and Monda gets to show once again his mastery of the guitar. “New Moon” is an example of just how much more experimental the TYS sound can get in this short 2 minute song of far east influence. “Terraformer” then closes the album with Monda showing off his fretless guitar grooves. This is one of the heaviest songs of the album and doesn’t disappoint in giving the fans a great ending.

Thank You Scientist bring forth their best mixed and produced album to date. The ability to have a traditional rock sound infused with violin and brass is something which is not new to the band. Their ability to compose music displaying fun and high musical skill matches their personalities. Every song has it’s moments of instrumental compositional genius and head banging goodness. With this album, they have now three consecutive official releases with some terrific songs and top notch musicianship. Terraformer is a highlight album of 2019.