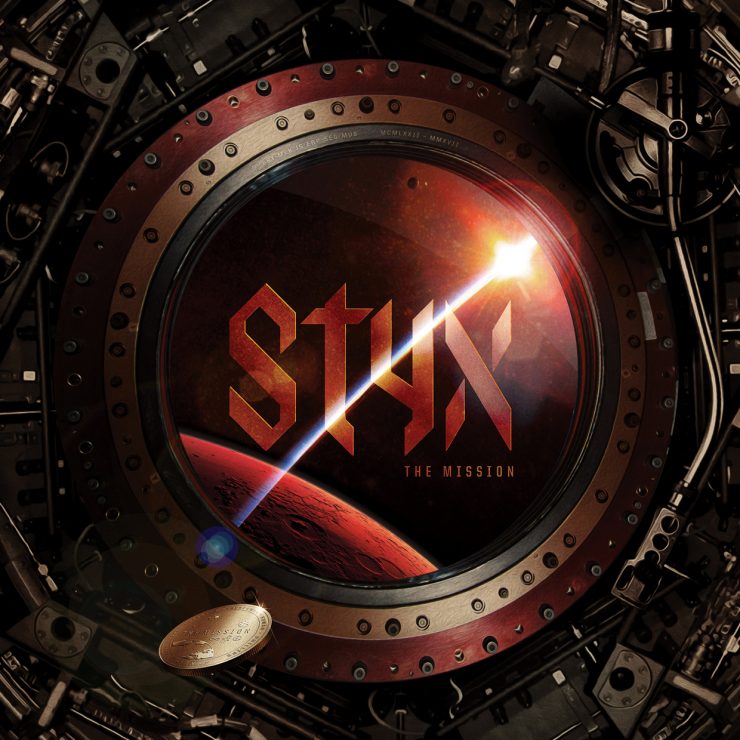 Styx have been a classic rock staple for 40 years with hits that every rock fan knows and can hear everyday just by getting in a car.  But the band have not released an album of new studio material since 2003’s Cyclorama, an album that went largely unnoticed.  Since that album 14 years ago, the band have been a constant touring force and those that have seen the band live recently now that this band can still put on a tremendous show.  However, as is the case with such talented musicians, the need to be creative and make new music is at the root of of why one becomes a musician in the first place.  So it is no surprise the band finally decided to take the trip back to the studio.  What is the surprise is how good this album is.  With The Mission, Styx have taken a trip back in time to when they flirted with progressive rock and created some of the most adventurous music on FM radio.

The lineup on the album is the touring lineup from the last 14 years with bassist Ricky Phillips making his first appearance on a Styx album.  All members turn in powerful performances, most notably the incredible Tommy Shaw, who’s high register vocals are as strong as ever and shows he still has the power to pull this off.  James Young is solid throughout on guitar and keyboardist Lawrence Gowan has far surpassed the Dennis DeYoung comparisons, providing just enough of his own charisma as the counterpart to Shaw.  The rhythm section of Phillips, original bassist, Chuck Panozzo, and outstanding drummer Todd Sucherman, help guide the proceedings with authority and precision.

No strangers to the concept album, the group decide to revisit the approach again, and it absolutely was the right decision.  The story of the mission to Mars, in the hopes of a new planet to inhabit, makes for captivating material for the songs and keeps the listener engaged.  It takes place in 2033 and deals with the first manned mission to Mars via Khedive, a nuclear-powered spaceship, underwritten by the Global Space Exploration Program (GSEP) with the band members taking on the characters in the story.

But in the end it comes down to the songs, and the album is full of great ones. The album opens with the “Overture” which immediately tells you this is a Styx album from the opening keyboards. This leads into the album’s first single and obvious show opener “Gone, Gone Gone”.  While not the best track on the album, it does make sense in the context of the album and for sure as a live track.  The next couple of songs are decent album cuts, one by Shaw and by Young, although both seem to end to soon.  The next track, the brooding ballad, “Locomotive”, is a magnificient song that harkens back the band’s classic sound.

It is at this point that the album really hits another level.  The album’s second single and best song, “Radio Silence” presents an element of danger as the lead character runs into some trouble and has a dialogue with mission control.  The next track, another ballad “The Greater Good” is where Gowan really shines.  This is another album highlight.  Then for the second half of the album the band ventures into some progressive rock territory.  “Time May Bend” is an intriguing song that segues into the musical interlude “Ten Thousand Ways” before reaching the album’s most progressive track, “The Red Storm.”  The album closes with another great trio of songs with the instrumental “Kehdive” the anthemic “The Outpost” and the album finally “Mission to Mars.”

Some fans might not be sure what to expect, maybe hoping for more radio friendly tracks or, in the reverse, something completely out of left field.  But what the band have done here is make a quintessential Styx record.  From beginning to end, the album runs like a brilliant movie with great epic moments and captivating urgency.  This is a fun record and an enjoyable listen throughout.  Good to see the band back and let’s hope this is just the beginning.