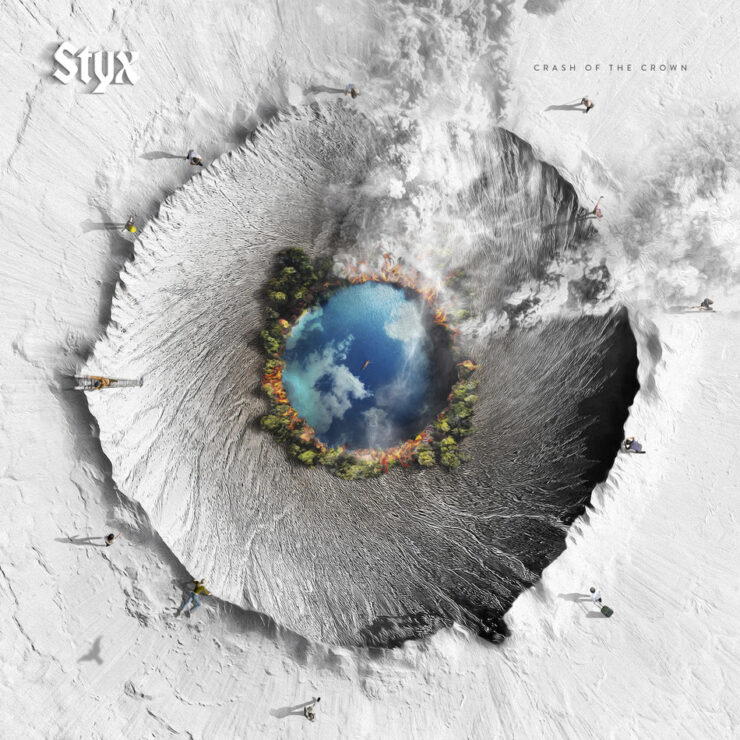 Review of the new album from Styx – Crash of the Crown out on June 18.

It’s a challenge that faces many bands in the genre: you have a significant, iconic back catalogue, audiences who will happily pay to attend your shows having accepted significant line up changes but… what about studio albums? This is a dilemma that Kansas, Yes and many others have faced over the last 20 years as the dynamic of the music business has morphed on account of technology and audience demands. 1984’s live album, Caught in the Act was the marker for the start of fluctuations in the life of Styx, with the 30+ years between then and 2017’s The Mission producing only 3 studio albums of original material. Perhaps that makes it surprising that such a short time later, we have Crash of the Crown, another new studio album about to be released. The Mission was easily the best album the band had produced since the 80s, so let’s see how the follow up measures up…

Well, I’ll cut to the chase: with Crash of the Crown, the band has captured the essence of their greatest musical moments and crafted a classic album that transcends these times. No, it’s not the Co-Vid album because, as the band have said, most of the writing and some of the recording was completed before lockdown. However, the key to great lyric writing is producing words with universal applicability – on that basis, I think many will find this to be an album that speaks to the times but won’t sound like a historic piece when revisited in the future.

For me, one of the strengths of The Mission was the band demonstrating that musical inventiveness and creativity doesn’t need to mean epic length tracks (the longest track here is 4:00 mins long). “The Fight Of Our Lives” kicks things off with a proggy intro of less than 30 seconds, before the magnificent signature vocals of the band kick in, declaring “We will not give in!”… and they’re off! Four part and five part harmonies are something this band takes in its stride and they standout throughout this album. Tommy Shaw’s vocals lead “A Monster”, a track where just when you think you know where it’s going, takes a left turn into a mid section powered by acoustic guitars and mandolins! Todd Sucherman gets a quick drum solo before a dive-bombing JY guitar solo takes us home. The musical inventiveness within this track that lasts for less then three and half minutes is mindblowing. Credit must go to both the band and “seventh man”, producer Will Evankovich, who himself contributes guitars, keyboards, percussion and vocals.

New boy (!) Lawrence Gowan leads “Reveries” and once again, the band’s playing, singing and full range of skills are all on display as the music segues to “Hold Back The Darkness”. With three powerful lead vocalists, the band can craft superb dynamics – an example being this song which begins with Gowan’s voice accompanied by acoustic guitar, before Tommy Shaw’s voice picks up verse 2 with a darker more melancholic edge. An unexpected guest spot from Winston Churchill launches “Save Us From Ourselves”, with Tommy Shaw sounding almost like Don Henley on this one.

The title track is the first time in their catalogue that a Styx track has featured three lead vocalists… JY’s moody baritone gives way to some furious Hammond organ, kicked into touch by a Shaw-led disco section (yes indeed!) , and a classical piano segment; Brian May style multitrack guitar follows, with a vocoder feature and Gowan conjuring memories of Mr Mercury in the final vocal piece. When you see it written down, you could conclude it’s an “everything including the kitchen sink” approach but in fact the shifts and changes in this track are perfectly executed… and they prove to be a great contrast to the more straightforward “Our Wonderful Lives” which follows. Styx with banjos works completely well in this stripped back sing/ clap along track which is as understated as the previous track was overblown – and a shout out to founder Chuck Panozzo’s bass on this one!

The second half, it feels, opens with the Moog intro to “Common Ground”, which is packed full of signature Styx elements, and is followed by “Sound The Alarm” which features some great Shaw/ Gowan duet moments. The short but inventive “Long Live The King” has entirely different sound, including a great 12-string electric guitar riff. The album itself does have an underlying concept of the light at the end of the tunnel, and the dark situations which we sometimes have to go through to reach it. So you have “Long Live The King” among the songs which touch on the more historic aspects, and the Indian-influenced “Coming Out The Otherside” being a very explicit statement of the concept.

Before the closing orchestrations of “Another Farewell”, we have a dazzling “Styx-In-A-Song” epic in “To Those”. Sucherman’s Moon-like drumming on the verse, with Gowan hitting the top of his range is a stand out album moment. The song builds to a majestic chorus and a “stand and be counted” rallying cry.

For a band approaching 50 years since formation, it’s clear that even a global lockdown, cannot hold this line up back. The fresh ideas, creative arrangements and incredible instrumentation are still coming thick and fast and I would go so far as to say this album stands as one of the very finest in their catalogue.

Order it here and at Styxworld.com.

Released on June 18th, 2021
Key Tracks: Reveries, Save Us From Ourselves, Crash of the Crown