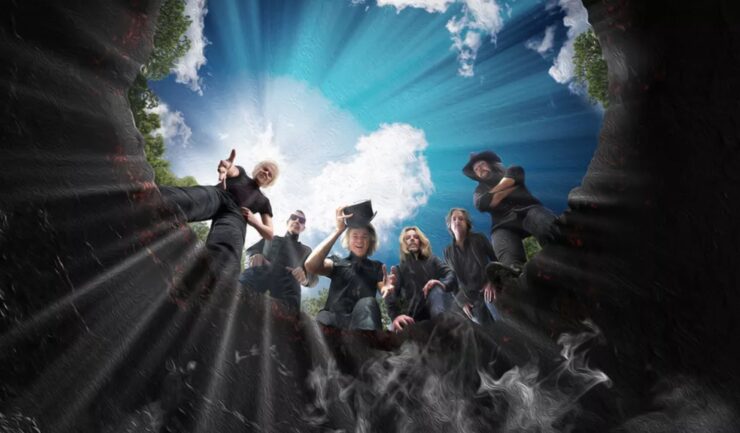 Styx – Crash of the Crown will be released on June 18

Fans can pre-order it here and at Styxworld.com starting Thursday, May 6.

The title track to CRASH OF THE CROWN can be heard here:

The song “Crash of the Crown” itself breaks some brave new world ground for STYX. Actually, it’s the first cut in the band’s storied canon to feature three lead vocalists, seeing how it has James “JY” Young unleashed at the starting gate, Tommy Shaw heading up the heroic stacked-vocal middle section, and Lawrence Gowan leading the vocal charge for the final verse. “I’m always looking for the one different thing we can do and still have it be STYX,” the ever-ebullient Gowan notes, “and that’s the song I’m most proud of. The beauty of it is that it’s the culmination of all our talents crammed together into one song, ABBEY ROAD-style. I also got to use some gear I never thought I’d have the chance to play on a STYX record like Tommy’s Hammond B3 organ, my Minimoog, and my Mellotron.”

Efforts to record CRASH OF THE CROWN began in earnest at Shaw’s home studio in Nashville during the fall of 2019, with Gowan — STYX’s criminally minded showman extraordinaire and keyboardist/vocalist since 1999 — in the room together with Shaw and the album’s producer, Will Evankovich, as he conjured up the album’s first song to be recorded, with cosmetic flourishes that reign over the insistent, yearning call for togetherness, “Common Ground.” But the global pandemic that inevitably transformed the way we all wound up living in 2020 changed the course for how many of the band’s home-and-away recording sessions ultimately had to set socially distanced sail. Safety precautions took precedent for all involved STYX bandmembers and production compatriots with much diligent quarantining and testing required before any one of them could travel to Shaw’s tranquility homebase to spread the uniquely ingrained STYX stardust that’s been duly sprinkled across the album’s cosmically chosen 15 tracks.
(more)

Of all those who made the trek to Nashville, original STYX bassist Chuck Panozzo — who, along with his late twin brother, drummer John Panozzo, formed the initial nucleus of STYX when they began jamming together in their basement on the south side of Chicago in 1961 — is hands down the most effusive about the experience. “I’m constantly amazed at how Tommy’s songwriting continues to connect with the social consciousness that spans across generations,” marvels Chuck, who plays on “Our Wonderful Lives” and “Lost at Sea,” Lawrence’s all-too-brief aquatic fever dream. “Both he and Will have been able to tap into the core elements of the human condition, which is something that’s not going to change that much in 50 years — or even 500 years. That’s why STYX remains relevant after all this time, because we’re part of the human condition.”

Whether it’s the heady rush of the groundwork-laying opening track “The Fight of Our Lives,” the wistfully observational treatise of “Reveries,” the cautionary extended hand of comfort and redemption that frames “Hold Back the Darkness,” the undeniable uplift of “Our Wonderful Lives” (a beautiful sentiment further embellished by a most welcome, first-ever appearance by a banjo on a STYX album!), or the elegiac clarion call for shared grace in “To Those,” CRASH OF THE CROWN is music that is both concurrently of its time and truly timeless all at once. Although the official release date for this landmark album may be time-stamped as 2021, the omnisciently observational content of CRASH OF THE CROWN readily brings to mind an amalgamation of historical events that occurred in 1066, 1455, 1775, 1861, 1941, and even 2001 without citing any of them by name — Winston Churchill’s prescient wartime observations that permeate the pervasive pleas of “Save Us From Ourselves” notwithstanding. In essence, CRASH OF THE CROWN (or COTC, for short) is a modern-day sonic chronograph of the endless regenerative cycle of the rise and fall — and rise again — of our shared human experience.

“We’ve never been a protest band. We’re more like a gospel caravan trying to send out positive messages wherever we go,” observes CRASH OF THE CROWN co-creator and overall visionary Tommy Shaw, who joined STYX in December 1975 as a guitarist/vocalist and instantly became one of the band’s most important songwriters. “In order to share those positive messages, you have to look at what the problems are first to figure out all the ways you can help make sure everything’s going to be alright. That’s a very important part of how we do what we do.”

Though COTC takes a hard look at some inherently dark subjects, the prevalent light at the end of the tunnel eventually becomes each song’s focal point — a persistent fervor to keep moving forward and achieve the greater good.

STYX’s holy mission for cutting CRASH OF THE CROWN was crystal-clear to its co-creator from the get-go. “Absolutely no obstacles were going to get in the way of how we approached creating this album,” Shaw concludes about the herculean recording efforts of his fellow COTC makers. “And everything came out exactly the way we wanted to hear it.”

For Record Store Day on Saturday, June 12, STYX will also release THE SAME STARDUST EP on blue 180-gram 12-inch vinyl only, which will feature two brand-new songs on side one (“The Same Stardust” and “Age of Entropia”), as well as five live performances on side two of some of STYX’s classic hits previously heard during their “STYX Fix” livestreams that have been keeping fans company during the pandemic on their official YouTube page, including “Mr. Roboto,” “Man In The Wilderness,” “Miss America,” “Radio Silence,” and “Renegade.”

In touring news, STYX and COLLECTIVE SOUL are rested, healthy, and ready to hit the road for their first-ever multiple city tour together. STYX had previously announced their return to Las Vegas with a three-night sold-out engagement at The Venetian Theatre inside The Venetian® Resort Las Vegas on September 24, 25, and 26, which will include an exclusive set list and brand-new stage production. Tickets for various cities, as well as exclusive VIP packages from each band, are available now at StyxWorld.com and CollectiveSoul.com.

Check out the band’s itinerary below, with more shows to be announced soon: