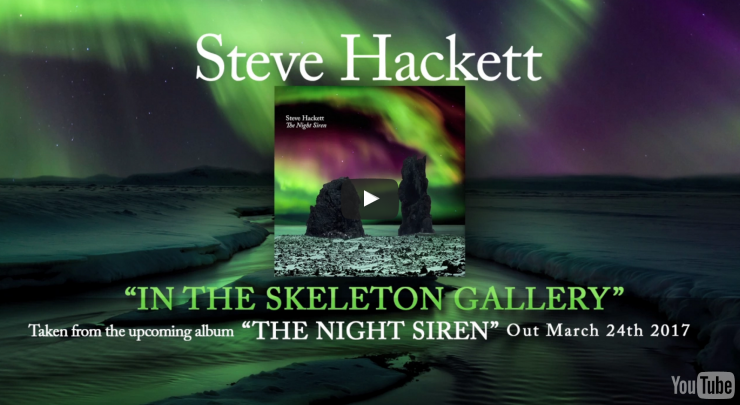 Guitar virtuoso and rock legend, Steve Hackett (formerly of Genesis), is set to release his latest album ‘The Night Siren’ on March 24th, 2017 through InsideOut Music (Sony).  As implied in the title, ‘The Night Siren’ is a wake-up call… the warning of a siren sounding in this era of strife and division.

Check out the first track to be taken from the album, titled ‘In The Skeleton Gallery’, which you can hear now:

Steve had this to say about the song: “I’m excited by the imminent release of my new album, The Night Siren, which includes this track, “In The Skeleton Gallery”. You know that ancient childhood night terror which creeps up on you in a dark moment when you’re least expecting it… This track moves from a dream-like groove with a Middle Eastern tinged accompaniment through to a sinister march and on to an out-there nightmare ride, before the child’s box of tricks reclaims it and the lid is finally closed…”

‘The Night Siren’ showcases Steve’s incredible guitar playing as strongly as ever, along with musicians from several different countries who Steve invited to join him in celebrating multicultural diversity and unity. This includes singers from Israel and Palestine, who both actively campaign to bring Jewish and Arabic people together. There are also instrumentals from the USA and Iraq and a multiplicity of sounds, including the exotic strains of Indian sitar and Middle Eastern tar and oud, the ethnic beauty of the Peruvian charango and the haunting Celtic Uilleann pipes.