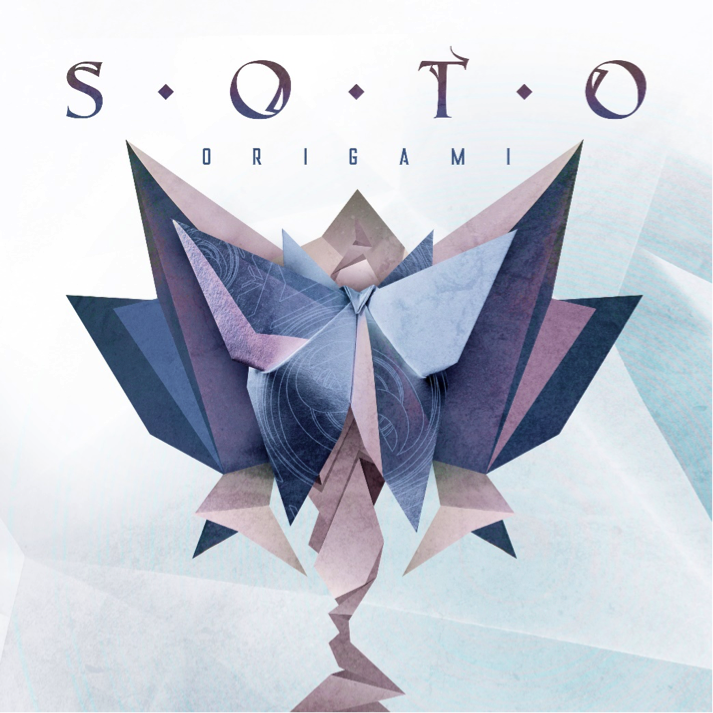 Checking my facts pre-review, it did surprise me a bit that JSS has been on my musical landscape for 35 years, since his appearance on Yngwie Malmsteen’s Rising Force album in 1984! That career has spanned many bands, projects and styles, and, like its predecessors, the third Soto album leans towards the heavier side of his output. The music is riff heavy, has hints of electronica, but is thoroughly melodic, with plenty of hooks.

My first reaction to this album is how well it captures Jeff Scott Soto, the sparkling frontman, who I first saw live with Sons of Apollo last year. The sheer energy of his stage presence comes across in this music. “HyperMania” and the title track, “Origami” kick the album off at its heaviest, but the choruses and the Soto-spark make these songs more than just a shred-fest. “BeLie” has an atmospheric tone and stacked harmonies in the chorus. It includes features for drummer Edu Cominato in the breakdown, bass player Tony Dickinson in the middle section, and guitarists BJ and Jorge Salan in the playout, plus some sweet Queen-style guitar harmonies. This is a great band and the straight ahead approach is peppered with clever musical ideas and shifts throughout.

For me, the two strongest album tracks come part way through: “World Gone Colder” boasts a strong chorus and a middle section guitar solo which is very rewarding. That is followed by “Detonate”, which features original bassist David Z who sadly passed away in an accident. This song’s syncopated ending section is a great moment, before a final chorus brings it home.

Things drop back a bit for “Torn” – not a ballad as such, but a more laid back song, with an electronic backdrop, to which the guitar line up contribute some crunch on the chorus. Breath caught, we are straight into the intensity of “Dance with the Devil” which features a superb schizoid solo – this song has all the makings of set list opener, with definite overtones of his SOA sound.

Funk has always been a big part of the JSS sound, and so the appearance of a horn section in the (still heavy!) “AfterGlow” is a contrast to what has come before, but not in the context of the musical styles we know Soto embraces. Some of the interplay is reminiscent of the band Extreme, but this is no carbon copy – it’s a total Soto-style! “Vanity Lane” is perhaps one of the more ordinary tracks on a very consistent album, but it is solid enough.

The album closes with a Michael Jackson cover version… Yes you did read that correctly! I will admit to not spotting that on first listen. A niggling familiarity with the melody during the verses, turned to recognition when the chorus kicked in. “Give In To Me” is an interpretation of the song from the “Dangerous” album that originally featured Slash. This heavier version elevates the song to something higher, with stand out guitar playing, and of course, Jeff’s vocals give the song an entirely different feel.

And so the album closes… 45 minutes… “old-style” album length and a great representation that covers the ground it needs to in its 10 tracks. If you are a fan of Sons of Apollo who is wondering where to start to investigate the rest of what Jeff has done, this is the perfect place to start. The frontman’s personality shines through, the songs are memorable, and the band get to show their full potential. Definitely worth checking out.

Released on May 24th, 2019 on InsideOutMusic