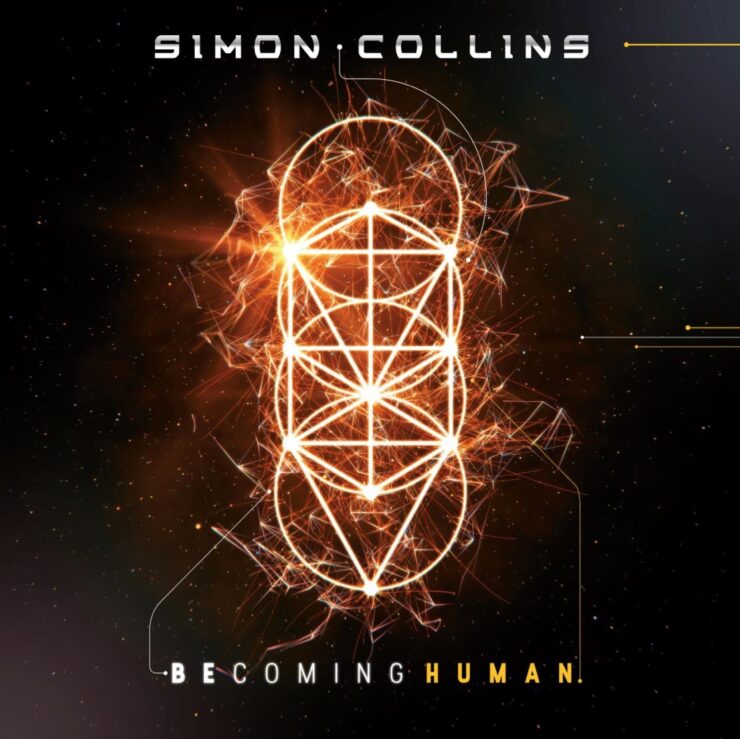 Back in 2013, a surprise debut album made some big waves in the prog world. That album, Dimensionaut from Sound of Contact, was the brainchild of Dave Kerzner and Simon Collins. With a unique sound that recalled early 80s era Genesis with a sci-fi flare, the album was part of the new wave of albums in the last decade that saw a resurgence in progressive rock. It was also, at the time, the fastest selling debut album by any band in the 20 year history of Inside Out Music. The band unfortunately could not follow up with a second album and soon disbanded with Dave Kerzner launching a successful solo career and numerous other projects. And now we finally have a new solo album from SoC’s vocalist and drummer, Simon Collinsm and fans of Dimensionaut should pay close attention.

“Becoming Human” is Simon’s fourth solo release, following his debut “All of Who You Are” (2000), sophomore effort “Time For Truth” (2005), and his third album “U-Catastrophe” (2008). Joining Collins on the album are his fellow SoC member Kelly Avril Nordstrom on guitar, bass player Gaz Williams, and guitarist Robin Boult. Simon, son of prog legend Phil Collins, of course handles drumming duties and vocals.

Becoming Human finds Collins comfortably returning to the sound of Dimensionaut, with even more focus on strong hooks and memorable melodies. This is immediately evident in the album’s title track and first single. Electronic sounds build the soundscape underneath Collin’s raw vocals right before the chorus kicks with subtle guitars and drums. The second single “The Universe Inside of Me” continues in the similar vein with a verse driven by drum samples and melodic hook in the chorus. Another highlight is in the empowering tone of “This is the Time” which kicks in with the chorus first. The penultimate track “So Real” is one of the album’s best tracks with upbeat tempo and brilliant chorus displaying Collin’s knack for a good pop song. This all leads to the epic prog closer “Dead Ends” which clocks in at 9 minutes. This is song that really would have fit on the second Sound of Contact album.

Simply put, Collins has produced a fantastic album full of really great songs. For any Sound of Contact fans wondering what another album by that band might have sounded like, this is a worthy successor to Dimensionaut. Let’s hope Collins doesn’t take much longer for the follow up to this one.

Released on Sept 4th on Frontiers Music
Key Tracks: Becoming Human, This is the Time, So Real, Dead Ends