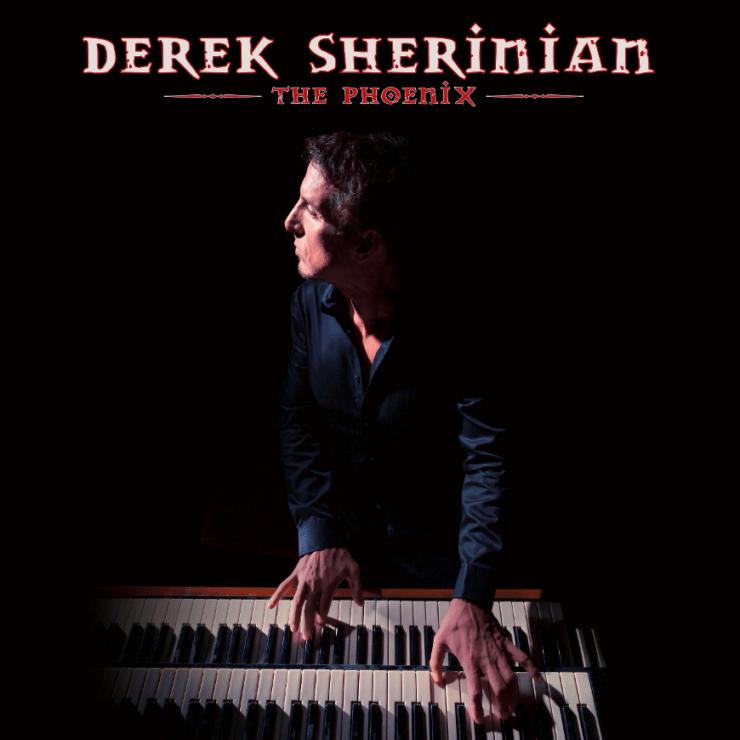 One of the best things this quite chaotic year has brought with it is the non-stop release of great new music, some of it with collaborations that we either haven’t thought about or we’ve been hoping to happen for many years, and this album is no different. Derek Sherinian is back with a new solo album since his last release from 2011, along with Simon Phillips and many fantastic artists which make this album an absolute big return for Sherinian’s solo career.

The album starts with the title track “The Phoenix”. I personally really appreciated this track as an opener of the album, it sets the energy and prepares you for the journey ahead. It begins with a powerful ad-lib synth solo as if Sherinian was stating: “This is me, I’m back, you better fasten your seatbelts”, and you would be right to. After the solo, we have Simon Phillips joining him on drums setting up the groove and supporting Sherinian’s continuous shredding only to be followed by Billy Sheehan’s explosive notes which leads to the main theme of the song. If you hear closely, you’ll be able to listen Armen Ra’s theremin performance, which adds a layer of mystery and depth to this power trio track.

“Empyrean Sky” is the following track where we find Bumblefoot joining on guitar and Jimmy Johnson on bass. You can hear the main riff being supported by Phillips’ solid groove and fills, the drums sounding exceptional, driving towards my favorite Hammond organ solo of the album.

It’s been said that each guitarist was given the freedom to express themselves in the studio. You can hear that very clearly across the album, but especially on “Clouds of Ganymede”, where you just know Steve Vai is joining Sherinian with his signature sound, choice of notes for his solos and overall vibe of the track. It’s worth mentioning that Sherinian does a great job adapting his performance and sounds according to the needs of each track, styles and feel vary but at the same time there’s a consistency across the album.

“Dragonfly” is something we haven’t seen Sherinian do often: a song performed on acoustic piano all the way through, without synthesizers or guitars. This tracks really shows the chemistry between Phillips and Sherinian. Being supported by Ernest Tibbs on bass, this track has many jazz influences, showcases Sherinian’s ability to make the piano sound huge and it really brings different flavors and colors, which feels refreshing after experiencing the last 3 tracks. Phillips’ groove is tasteful, accurate and really brings a Toto-esque feel to the whole song. This track is one of my personal favorites on the album.

Transitioning from “Dragonfly”, comes the mystery that brings the intro of “Temple of Helios”. Bumblefoot and Jimmy Johnson are again featured in this more progressive and melodic track where Phillips performs a short but perfectly executed drum solo, the band trading two bars each.

Now, let’s talk about the fiery next track: “Them Changes”, a Buddy Miles’ original from 1970. This track feels quite special and, even though keeping the general sound of the album, it brings some freshness and resets the palate of the listener. Featuring Joe Bonamassa, he does a really good job on his lead vocals and his guitar parts, especially his bluesy guitar solo. You can hear Sherinian’s tasteful performance, allowing Bonamassa shine throughout the song and finishing it by trading solos with him, Hammond and guitar. This track is a great feel-good song that will put you in a good mood at any time of the day.

“Octopus Pedigree” arrives without hesitation, bringing us back to the prog rock sound. A fantastic headbanger where you can hear a Simon Phillips’ solid performance and groove supporting Bumblefoot’s heavy riff. It’s worth to mention that Phillips’ performance across the album, feel, groove and fills, brings an important tight and solid sound to each track, but I feel he did an exceptional job on this track. It would be great to watch him perform this song live.

One of the guests that I was personally excited for was Kiko Loureiro, and boy, he did not disappoint! “Pesadelo”, meaning “Nightmare” in Portuguese, is the longest and the last track of the album. With a beautifully performed flamenco section, “Pesadelo”’s heavy riffs and Loureiro’s guitar solos make this track the perfect closer. Sherinian’s Hammond and synth solos are powerful and impressive and we can also hear Armen Ra’s final theremin performance to tie up the entire album.

When I finished listening to the album for the first time, I found myself excited for everyone to listen to it. Fantastic production, catchy and powerful songs, each guitarist’s personality shined across the album, and of course a Derek Sherinian who shows again why he is one of the greatest prog keyboardists, delivering great material after his last solo release “Oceana” from 2011.

Simon Phillip’s input is immediately noticeable on each single track; he definitely brings this album to a new level, with of course the big industry names featured and performing on each track.  All of these contributions make this album enjoyable not only for the keyboard fan, but everyone looking for high quality music. This is definitely not your ordinary solo keyboard album. You can hear the great care and dedication Sherinian put into creating it, making it yet another fantastic release for 2020.