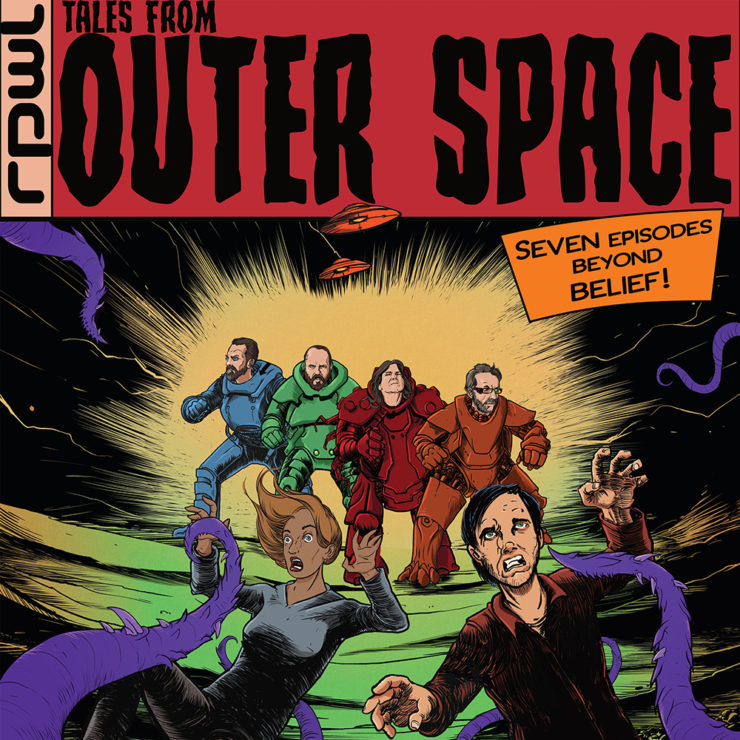 Review of the RPWL album – Tales From Outer Space

“There are many stories about visits from extraterrestrials. Sometimes the aliens come as friends, sometimes they come to enslave us. On this cold night, lights in the sky are making people all over the world uneasy…”
After three live albums Munich’s RPWL return with pseudo-concept album ‘Tales From Outer Space’. Seven short stories where the common denominator is science fiction. Singer and keyboard player Yogi Lang, “For us it was not only thematically very interesting, but also musically an unbelievable playground, which literally invited us to experiment with sounds and all imaginable musical stylistic devices.”

RPWL’s sound can be described as art and progressive rock and there are oft noted heavy hints of Pink Floyd in their music and the vocals of Yogi and guitarist Kalle Wallner. Mind you, what can you expect from artists who started as a Floyd tribute band and who perform a conceptual live show called ‘Pink Floyd’s The Man And The Journey’. It’s not like they are exactly trying to tone down the comparison, is it?

The band’s ninth studio release is, without a doubt, their strongest and most powerful yet although the striking album art will not be to everyone’s taste. Opener “A New World,” where aliens meet the band and learn how much suffering and evil prevails on earth and immediately leave again, completely shocked, strides into the room with bombast, Wallner’s dominant guitar and Yogi’s vocals set proud, front and centre. For all RPWL fans, this will bring an immediate smile to their faces, the band have returned bang on form.

There’s an immediate dynamism obvious in the song driven music as the album moves onto the darkly enigmatic “Welcome To the Freak Show” with its driving riff and bassline. Yogi’s vocals have always drawn comparison with David Gilmour and it’s none more evident than on this collection of tracks. It has an especially hypnotic quality on this beautifully flowing track.

“Light Of The World” is a ten minute mini-epic where Kalle’s superb and intense guitar playing gets to shine. A song that is immediately recognizable as an RPWL track, one that builds and builds, heightening the tension at every level, before opening out into a magnificent opus.

It’s apparent, after only three songs, that this group of talented musicians are at the height of their musical abilities on the new record and that’s reinforced by the thunderously enjoyable romp that is “Not Our Place To Be.” Featuring the not inconsiderable bass playing talents of Guy Pratt, this is a high octane piece of music that really gets under your skin.

This energy and fine guitar work carries over to another great song, “What I Really Need,” where Kalle’s sublime guitar playing has a feel of U2’s The Edge throughout. A high-tempo track that left a big smile on my face, there is an actual feel good factor within the music and you will find yourself singing along to it.

“Give Birth To the Sun” has a more laid back, ethereal feel to it, Yogi’s calm and collected vocal lending a soothing tone. It’s possibly the most progressive track on the album, mysterious and arcane as its winds its way into your affections. The keyboard and guitar are the main focus of attention as they guide you on this thoughtful musical journey to a place of serenity and reflection.

This wholly involving musical drama comes to a close with the divine “Far Away From Here,” four minutes of gentle and thought provoking music where Kalle’s soaring guitar and Yogi’s humble and soulful vocal end the tale on a more hopeful note.

‘Tales From Outer Space’ sees RPWL return on a high with an involving and spellbinding collection of songs that will appeal to fans old and new and cement them in the forefront of the genre where they truly belong. Already a contender for album of the year in my book!

Guy Pratt (Pink Floyd, David Gilmour) – bass on ‘Not Our Place To be’