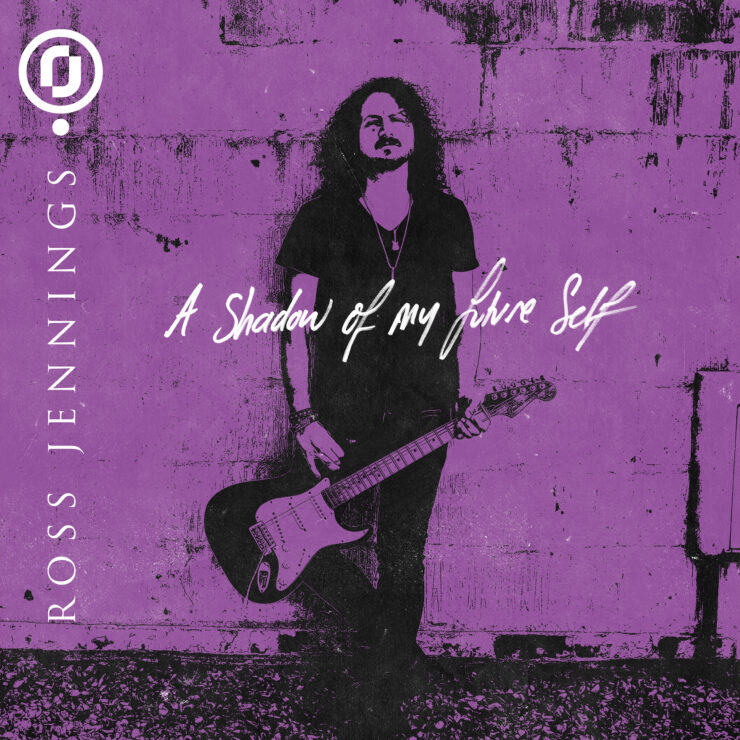 If you’re a regular visitor this website, you can’t have escaped mentions of prog-metal giants Haken. They are one of the bands whose ascendance we’ve witnessed over the life of this website, and who have steadily achieved the climb, building an active and enthusiastic fan base who have spread the word far and wide over the years and around the world.

In recent years, various side projects involving band members have emerged, exploring deeper and sometimes darker avenues of their musical influences and aspirations… Novena, Nova Collective, To-Mera… and now this, the first bona fide solo album from frontman Ross Jennings – A Shadow Of My Future Self.

Let me set the scene at the outset: put aside any pre-conceptions you may have when you first press play… this album is going to take you on a journey through a dizzying variety of musical moods and styles, anchored by the front man’s distinctive vocals. You will hear things you aren’t expecting… and some things that might be closer to your expectations. But I virtually guarantee that when you reach the end, you’ll want to return to the start and take the ride again.

The acoustic “Better Times” eases you in – a simple backing means our ears are trained on Ross’s vocals, with harmonies stacked, CSNY style. Despite its simplicity the dynamics of the track are effective with a reverb drenched steel guitar echoing quietly in the background. As it fades, get prepared for a “180” as the single, “Words We Can’t Unsay,” kicks in, with a strident drum backing, flanged guitars and 80s synth stabs. It’s a strong track, with a chorus that’s an ear-worm (it passed the test with my kids, who were singing it for the rest of the day!) – it couldn’t be more different from the track before, but the voice anchors everything, with falsetto parts beneath the strong melody.

Now at this point, if you’re a Haken fan, you might be thinking… acoustic, pop hooks… hmmm. But then comes “Violet” – you only need to wait 20 seconds before its guitar riff slams you in the face, with whaling saxophone over the top… but wait… another 180, and a tight funk rhythm guitar, with a locked in rhythm section is leading this track – yes, it rocks, but in a very funky way. The chorus vocal is once again a jewel in this song… and the heavier riff returns! This track is a good example of why it makes this album tricky to describe or define… yes it’s absolutely a rock album, but you have to be prepared to follow its lead and the twist and turns it takes. “The Apologist” which follows is a higher tempo track, again with funky, even jazzy, elements, anchored by yet another killer chorus. At the risk of repeating myself, Ross shows that irrespective of musical style, he can write fantastic melodies… and we are only about a quarter of the way into the album!

At this point I need to catch my breath, and “Rocket Science” gives me the chance to do that! The opening verse guitar riff brings to mind Andy Summers/ 1980s Alex Lifeson, before a thoroughly 80s pop chorus lifts the song off. (Let me just qualify that when I talk about 80s, I am talking about the finest pop/ rock moments of that decade, rather than the nostalgic cheese!) Ross plays the majority of the guitars on the album and he told us in our recent Solo Albums podcast that lockdown let him focus on that.

“Catcher in the Rye” starts as a more downbeat track, almost country sounding, with Ross emoting at the top of his range / falsetto. The track closes with a brass solo which fits perfectly, and demonstrates that he has felt liberty to draw an instruments and influences as appropriate in this really diverse set of songs. The layered vocal harmonies and orchestral sounds of the acoustic “Since That Day,” lead directly into a jazzy swing of “Young At Heart,” which has a more complex structure and (yes again!) another killer hook in the chorus, with a dynamic key change shift.

“Feelings” may be a title that suggests a ballad, but the track is a power pop tune that brings Jellyfish to mind – stand out drumming from Simen Sandes. “Third Degree” and “Phoenix” are two tracks which show their roots in Ross’s songwriting on acoustic guitar – the latter track really lifts off with a repeating piano riff as drums and bass kick in, pushing the song to anthemic heights. With a brilliant lyric and a strong melody, Phoenix is the “wait til you hear this” prog track on the album that you can use to lure in people whose musical tastes may not extend to listening to Haken – by the time the Moog solo ending arrives they’ll be swept away by the song.

Again a recovery is needed after “Phoenix’s” triumphant ending. “Grounded’ is a beautiful Pink Floydian style ballad complete with a tasteful sax solo (you will probably have heard the single already) – while the anthemic “Year,” from which the album takes its title closes with an intense building conclusion, but ending with Jenkins’ voice and guitar, similar to how the album began. A bonus cover of Dua Lippa’s “Be The One” is a fun extra, and it’s melodic pop elements combined with great playing mean it doesn’t feel out of place.

Ross recently told us in a recent podcast he initially tried to write an album of country songs and… well this is not it! Instead what we get is a massively melodic and musically diverse selection of hook laden songs, with Ross’s vocals covering their full range throughout the selection of tracks and styles. Some artists use their solo albums to go more experimental or indulgent. With A Shadow of my Future Self , Ross Jennings has made an incredible album that is massively accessible and warrants a wider audience. Here’s hoping it gets the attention and kudos it deserves.