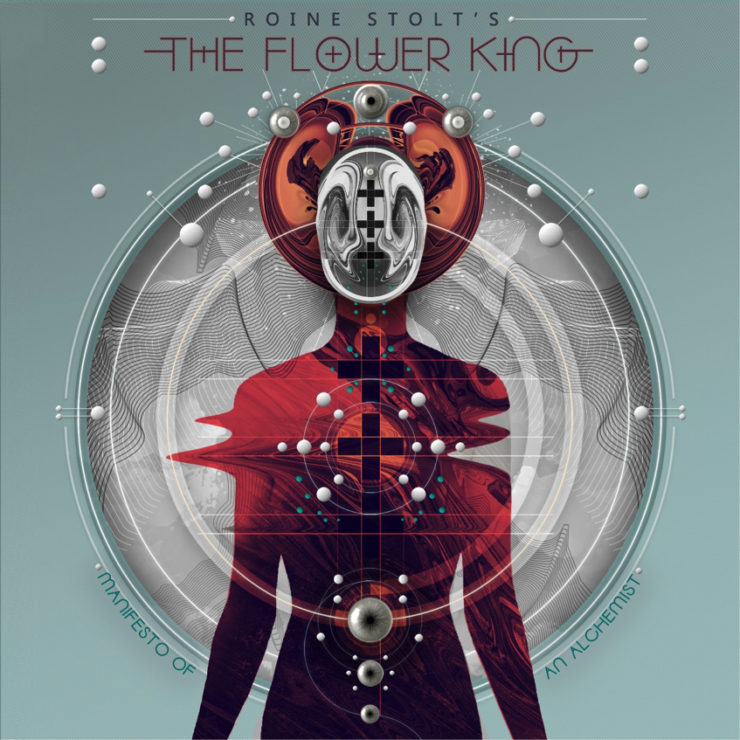 Review of Roine Stolt’s The Flower King – Manifesto of an Architect, out Nov. 23, 2018 on InsideOutMusic.

Roine Stolt comes in many guises. We tend to think of his Transatlantic band mate Mike Portnoy as Prog’s “Man of Many Bands”. But when you think about it, over the last 10 year alone Roine’s presence has touched The Flower Kings, Transatlantic, Kaipa, Agents of Mercy, Kaipa Da Capo, Anderson/ Stolt, Steve Hackett’s band and The Sea Within, among others. And here he is again!

2018 sees the return of The Flower King – and yes let’s get it out of the way: there’s no “s”. Personally, I’ve really enjoyed the InsideOut Flower Kings box sets, Kingdom of Colours, which have allowed me to re-visit (and in a few cases hear for the first time) albums from that catalogue. But this is not that band! This is closer in conception to Stolt’s 1994 album “The Flower King”, not his debut release but a significant starting point to the phase of his career that continues to this day. This has a rawness that hasn’t been part of what we usually hear in the lush soundscapes of Anderson / Stolt or The Sea Within and while not bluesy in style, it encompasses that blues spirit in its spontaneity – but relax, dear reader, this is most definitely Prog!

The album was recorded in a short period of time, using a batch of ideas, some new, some old and some spontaneous. Like the 1994 album, the lead vocals are mostly Roine’s and joining him are The Sea Within’s drummer Marco Minneman, brother Michael Stolt and the ever-present Jonas Reingold on bass, plus various guests on keys and vocals including Hasse Froberg and Nad Sylvan from some of his previous bands.

The spacey intro, “Rainsong” leads straight into a different sound in “Lost America”, a sound is simple and clear – it’s a solo album but this is a band playing. Stolt’s signature guitar is at the fore with some seriously impressive bass – all of that builds to a crescendo and a drop before things start to rock (more cowbell anyone?) and the refrain returns to “Rainsong”’s “It’s raining while you’re waiting”. It’s a great start to the album – exciting music with a live edge. “Ze Pawns” begins with atmospherics reminiscent The Sea Within’s sound, with Marco making very creative use of his kit. Stolt approaches his subject in a way that makes his point (rather than moaning about the ills of the age) and it’s expression of the purest kind, not preachy or furious (mostly). When he’s not singing, his other voice, the Stolt guitar cuts through at the right moments, soaring to add colour, when the vocals take a break.

“High Road” is a 12 minute prog journey through a variety of styles and is followed by the first of the album’s three instrumentals, “Rio Grande”, a spectacular track, very much in a style I would call both “Classic era Prog” but also Classic Stolt. It features one of prog’s signature instruments, the flute, played by Rob Townsend from Steve Hackett’s band, which Roine enjoyed a spell in a few years ago.

A stand out track for me on this album is perhaps one of the simplest: “Next To A Hurricane”. A song of loss and remembering, its simplistic structure opens up with some time signature and syncopated structures – it’s a track that wouldn’t sound out of place on “The Sea Within” which, if you know the high regard I hold that album in, is quite a recommendation. Instrumental almost title track, “The Alchemist” follows, a track closer to fusion in style but in no way feeling out of place here. Once again Rob Townsend dazzles, this time on oboe.

The pastoral “Baby Angels” follows, the closest perhaps you could get to a Prog lullaby, beginning with a ukulele driven verse. Angelic harmonies flow through this track easing us gently into “Six Thirty Wake-Up”.

Perhaps the strongest track for me, though, is the closer, “The Spell of Money”. In interviews, Roine has mentioned that the lyrics of this album are very important to him and resonate with his worldview, and this track reflects some of the themes he addressed in “Wall Street Voodoo”, his last solution album, about corruption and greed. There’s so much to enjoy in this track from the lyrical guitar solo to the pulled back layout.

To produce an album of this quality off the back of the already impressive The Sea Within release this year is quite an achievement – The Flower King at his very best.

Released on Nov. 23rd, 2018 on InsideOutMusic
Key Tracks: Lost America, Next to a Hurricane, The Spell of Money