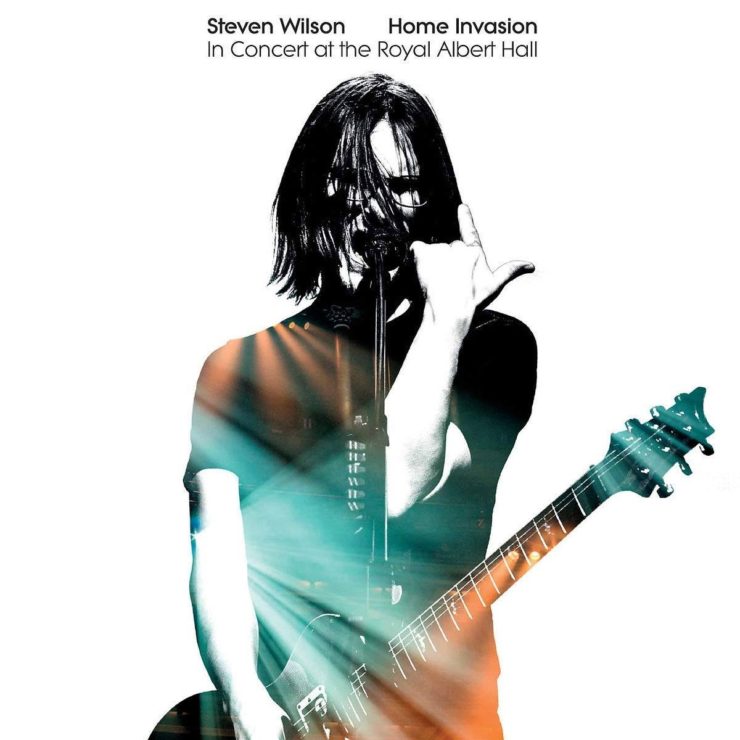 There are a lot of live albums and concert DVDs released each year.  Some are bare bones recordings of a show, some a recap of one particular tour, and some are a more than that.  They can be a career milestone, a recognition of a highly successful career.  The latest live release from Steven Wilson titled Home Invasion: In Concert at the Royal Albert Hall falls in the latter category. While by no means signifying an end of a career, the set captures one of, dare I say, prog’s finest artists, displaying his brilliant catalog of more than 25 years in spectacular fashion in one of the world’s finest venues.  It is an arrival of an artist who has finally achieved a vision that no one, probably even Wilson himself, could have imagined when he began Porcupine Tree in the early 90s.  From the rise of Porcupine Tree to his eclectic solo career, it’s all here and it all works brilliantly.

The show is beautifully filmed, capturing the final of 3 sold out shows at London’s Royal Albert Hall in March 2018.  Wilson has been on the road for nearly 2 years now supporting his most recent album To The Bone, and these shows were perhaps the pinnacle of the tour.  The set is split in 2 halves, the first opening with a couple of tracks from the latest album.  The second song “Pariah” is a jaw dropping moment in the set, as Ninet Tayeb, who performs on the song, joins the band to perform the track.  It already sets things in motion towards an incredible evening.  The rest of the first half of the show is a mix of new songs, Hand. Cannot. Erase tracks and a surprise Porcupine Tree track “The Creator Has a Mastertape.”

The second half of the set is where things really take off beginning with the epic PT track “Arriving Somewhere But Not Here.”  No where is Wilson’s diversity on more display that when he follows that track with the dance pop of “Permanating,” a track where he demands the audience stand up and disco dance.  It is an odd moment in a prog show especially with dancers on stage, but Wilson pulls it off well, because he believes in it and halfway into the song, you are dancing and believing it too.  The visuals in the show with the screen in front of the band and also behind, create a 3D effect that adds even more to an already captivating showcase.  Songs like “Song of I” and “Detonation” benefit from this tremendously, the latter track a highlight of the show with the full on rock jam that happens in the second half of the song.

After performing a couple of stripped down songs including a solo version of “Even Less” and the duet with Tayeb “Blank Tapes,” Wilson closes with a one-two punch of what are possibly his two best compositions, “The Sound of Muzak” and “The Raven That Refused to Sing.”  “Raven” is by every measure a masterpiece and in a live setting it is as breathtaking as the video for the song is haunting.  Everything about this live collection is great, the visuals, the sounds, the way it is filmed, the incredible band, the set list.  It is simply a brilliant celebration of one of music’s criminally under-appreciated talents.

Wilson continues his tour with dates in North America beginning Nov, 15th in Vancouver and doing 5 dates throughout Florida, before ending in San Antonio, TX on Dec 21st.  For full list of dates go here.