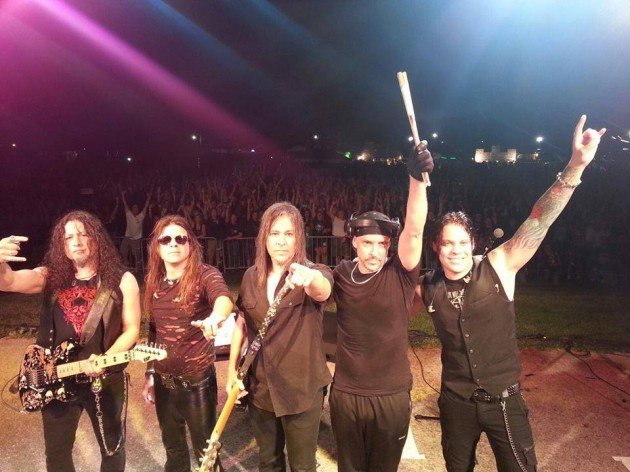 The Monster of Rock Cruise, featuring many of the great hard rock and metal bands from the 80’s sets sail this weekend, April 18th-22nd out of Miami, Fl.  Last night, April 16th, passengers and other guests were treated to a pre-cruise show from Queensryche and opening act Lillian Axe.  Lillian Axe were actually quite a surprise, having not seen them live before.  They did a great job of entertaining the audience of a few hundred or so.

Progressive metal legends Queensryche are a lean performing a machine these days. Gone are all the songs that no one wants to hear.  Instead fans are immediately treated to band favorites from the opener “Nightrider”, a song rarely played since it was released in the early 80’s to the final song, “Take Hold of the Flame.”  The mix of the songs were from the bands first 5 releases only, the EP, Warning, Rage for Order, Mindcrime and the 3 obligatory hits form Empire., plus one song from their last release.  While they very much function as more of a band unit now rather than Geoff Tate’s backup band, it is not-so-new anymore singer Todd La Torre, who steals the show.  His vocals are an exact replica for Tate’s but he adds his own flare where appropriate and takes great command of the stage.  For those who have not seen him before, it is very impressive to see somebody hit all those notes.  Tate really set the bar high and La Torre proves more than capable of filling shoes.

The rest of the band were at the top of their game.  Michael Wilton now acts as the leader of the group and is playing is extremely reliable and precise, while Scott Rockenfield plays now with a passion and intensity that seems stronger than is has been in recent memory.  Bassist Eddie Jackson handles a lot of the backing vocal duties as usual and guitarist Parker Lundgren handles the double guitar parts with ease.

Songs like NM156, The Lady Wore Black and Queen of the Reich come off as fresh as when they were written and they mix well with the later hits like Eyes of a Stranger, Jet City Woman and Empire.  Even Silent Lucidity surprisingly fits nicely in the bunch.  I have seen the band over a dozen times over the years and seeing this new lineup was more enjoyable than many of the last few shows I had seen.  The band are working on new material and should continue to tour.  Don’t miss them if they come around.   Here are some clips from the show:

Eyes of a Stranger:

Queen of the Reich: