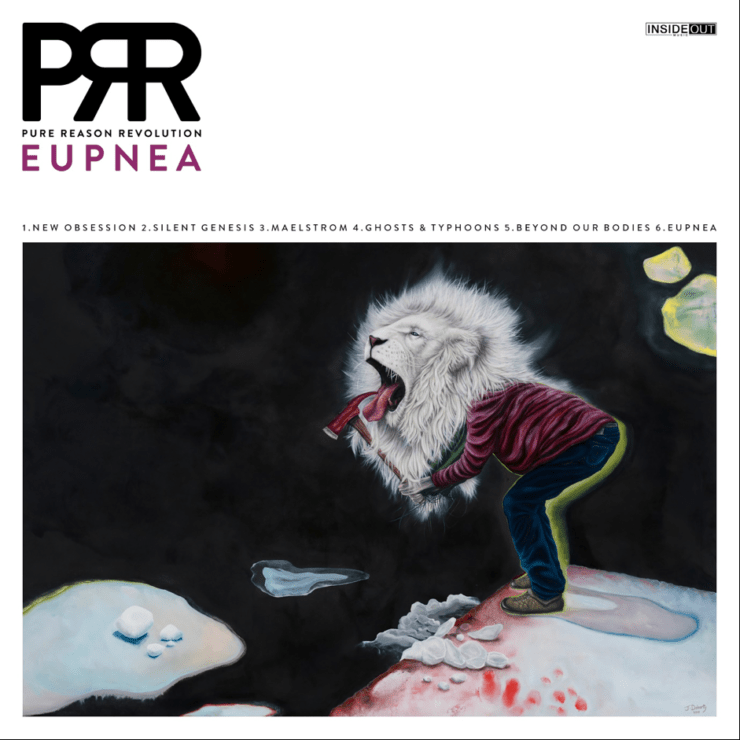 With 2006’s The Dark Third, British outfit Pure Reason Revolution created one of the most unified, fresh, and durable progressive rock debuts of the decade. Produced by genre legend Paul Northfield, it evoked the sleek edginess, density, focus, and catchiness of Radiohead, The Gathering, and Porcupine Tree while feeling quite idiosyncratic and singular, too. Although its full-length follow-ups (2009’s Amor Vincit Omnia and 2010’s Hammer and Anvil) moved toward more electronic and avant-garde aesthetics, the band never lost sight of what made them special. Sadly, though, they broke up in 2011 and ceased producing any new material—that is, until now.

Still led by vocalists and multi-instrumentalists Chloë Alper and Jon Courtney (but with some help from original guitarist Greg Jong), Pure Reason Revolution now reappear with their fourth studio LP, Eupnea (effortless breathing). Although it still contains touches of those second and third sequences, it’s thoroughly and transparently a deliberate throwback to that first gem. In fact, it’s downright astonishing how much it seems like the spiritual successor to The Dark Third, albeit with plenty of modern varnishes. What’s more, its unwaveringly affective melodies, beautifully orchestral instrumentation, and fluid poise and purpose make it not only a satisfying return, but arguably the best album they’ve made.

Eupnea immediately recalls their trademark shimmering somberness via opener “New Obsession.” An initial sound collage of dramatic Floydian synths, heartbeats, telephone rings, and hospital monitor beeps produces a weightily traumatic foundation; from there, an acquainted blend of resilient percussion, glittery guitar licks, digital heft, and bluntly wistful vocals (from Courtney and Alper in unison) reveals that the dynamic duo are perhaps more determined and capable than ever. Without a doubt, it houses one of their most irresistible choruses to date, too, with angelic harmonies, poignant piano notes, anthemic rhythms, and piercing guitarwork evoking the prophetic elegance of modern Anathema as it continues. We’re only one track in and Eupnea already sets a new standard for how impactful and stunning Pure Reason Revolution can be.

Luckily, the record loses none of that luminous power as it goes on. For instance, “New Obsession” melts into “Silent Genesis,” which undeniably (and perhaps intentionally) conjures the hypnotic pace and epic scope of “The Bright Ambassadors of Morning” while also attaining a rejuvenated identity that’s both serenely symphonic and raucously triumphant. Afterward, “Maelstrom” is sublimely bittersweet as it highlights Alper and Courtney’s merit as individual vocalists; “Ghosts & Typhoons” fluctuates brilliantly between extreme softness and heaviness in the midst of recapturing the electronic experimentation of Eupnea’s immediate predecessors; “Beyond Our Bodies” is an unforgettably succulent, decorative, and life-affirming ballad; and the closing title track acts a remarkably driven yet diverse tour-de-force of everything that the LP has unveiled thus far. In other words, all sides of PRR are fused together masterfully, leaving you in complete awe and appreciation for what they’ve just achieved.

Had Eupnea come out only a couple of years after Hammer and Anvil, it would’ve been an expectedly great return to Pure Reason Revolution’s origins. However, the fact that it’s the creation of a duo who haven’t worked together in nearly a decade makes it far more gratifying and astounding. Somehow, Courtney and Alper go beyond merely summoning every spark that made their prior work so magnificent, invigorating, and surprising; in many ways, they unequivocally outdo themselves by producing a relentlessly gorgeous, arresting, and inspiring experience. Far more than just a comeback album, Eupnea will surely be remembered as PRR’s magnum opus and one of the best albums of 2020.

Released on April 3rd, 2020 on InsideOutMusic