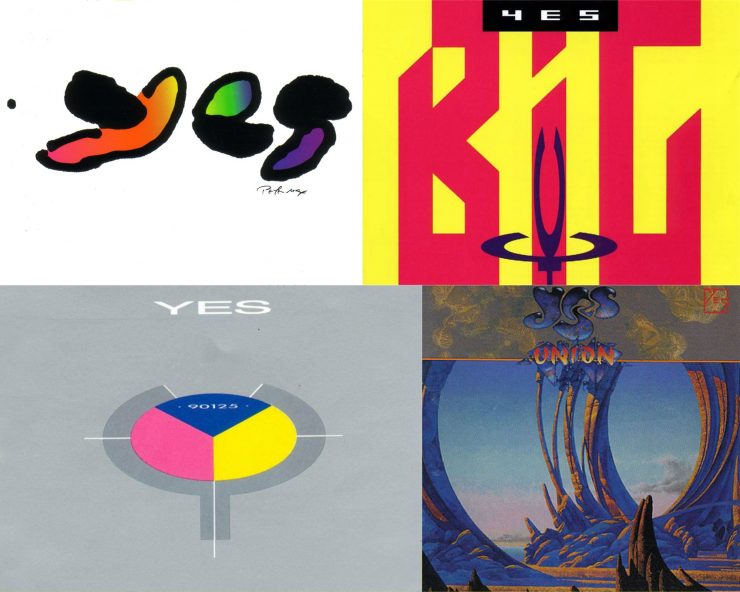 ARW, the group featuring the reunited Yes members of Jon Anderson, Trevor Rabin, and Rick Wakeman, recently kicked off their US tour last week and to much applause. The return of Trevor Rabin back to the stage and to Yes music has been particularly exciting for those fans of the 80s era of Yes. While not nearly as progressive and experimental as the 70s Yes albums, the 4 albums that Trevor Rabin was part of, 90125, Big Generator, Union, and Talk, brought a much needed rock edge to the group and produced their biggest hit ever with Owner of Lonely Heart. There are some amazing songs in the collection outside of the their mega-hit and we decided to look at those here.

10. I Am Waiting (From Talk) – An underrated track from the greatly undervalued Talk album. The album was not promoted enough when it came out due to the label going bankrupt, but it remains one a fan favorite. This track features some outstanding guitar work from Trevor, epic singing from Jon, and somehow sounds better today then when it first came out.

9. Rhythm of Love (From Big Generator) – The second single from Big Generator is a solid rock track that was one of the few from the modern Yes era that was always performed live. ARW are performing it on their current tour.

8. The Calling (From Talk) – The opening track from Talk is a monster, a powerful track that encompasses everything about that era of Yes: big drums, loud guitars, abundant harmonies and a few twists and turns musically.

7. Cinema/Leave It (From 90125) – “Leave It” sounded like nothing else when it came out and really broke Yes out of being just a Prog group. The harmonies were prototypical Yes but the music behind it really took the song in an unexpected direction. The video helped push the song as well. We also wanted to give a nod to “Cinema”, since it is a great instrumental number, even though it is more of an intro to “Leave It” on the album.

6. Shoot High Aim Low (From Big Generator) – This was the standout track from the commercially disappointing Big Generator which was unfairly panned at the time it came out. The back and forth vocals from Trevor and Jon was a great touch here and the explosive chorus really gives this song a cinematic quality. There was early talk ARW would be playing it on tour but ti apparently got cut from the set.