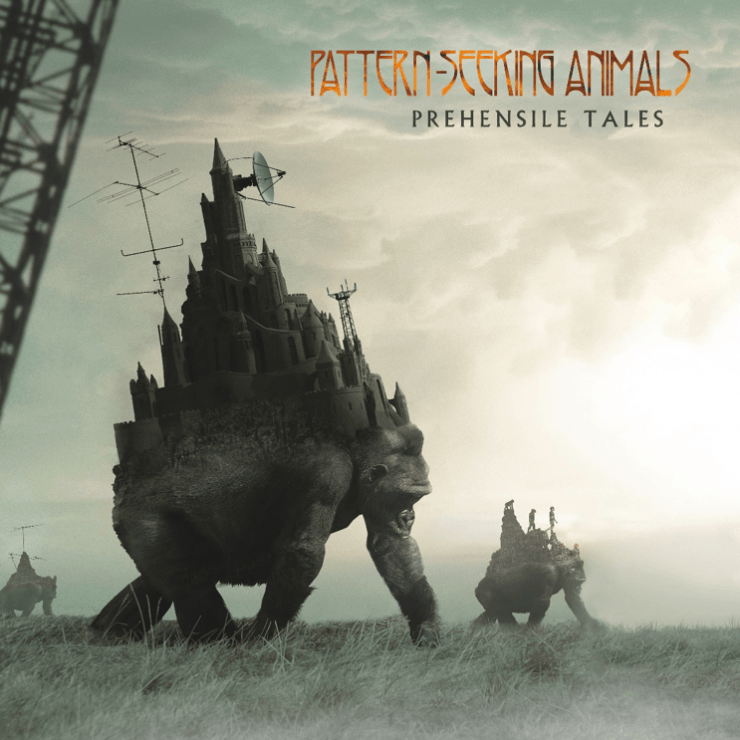 Review of the new album from Pattern-Seeking Animals – Prehensile Tales

John Boegehold sure can write a hook. He has given birth to some of the most memorable pay-off lines in Prog, as a long-standing co-writer for Spock’s Beard. But like any good songwriting parent, he knows where his various offspring belong. Pattern Seeking Animals (PSA) was born in 2019 as a project for material that Boegehold felt was unsuitable for Spock’s Beard. He nonetheless recruited existing and past members of the Mighty Beard for PSA, and the eponymous debut album was released in July 2019. Featuring Boegehold, Jimmy Keegan, Dave Meros and Ted Leonard, the debut was always going to garner attention – even if for no reason other than its line-up. Indeed, due attention was given, and PSA was born, delivered and walking before you knew it. In absolutely record time, PSA is now running in full-stride, with follow-up album ‘Prehensile Tales’ recorded and mastered, and due for release in May 2020.

I’ll just come right out and say this: we all fervently hope and trust that Spock’s Beard is alive and well, and that it has a strong future (indeed, recent activity would indicate that this is so.) That band has a special place in the hearts of Prog fans. It would be tempting for me to take the easy road and not mention Spock’s Beard in this review, because PSA is not Spock’s Beard, despite its line-up. But that would be disingenuous. Two members and one ex-member of one of Prog’s most respected outfits feature in PSA as well as one of the Beard’s main writers, and this fact simply cannot be ignored. They are brothers of the same mother, and to disregard their lineage in an album review like this would be a miscarriage. Readers who are fans of Spock’s Beard would expect some references. But not comparisons. So we will not ignore the elephant in the room – we will just not let it stamp on its progeny.

If any comparisons are to be made, it must be between ‘Prehensile Tales’ and PSA’s debut album. In this respect, I am not afraid to make the statement that this one is quite simply better. Far, far better. While not deviating from the hook-driven, catchy pop-rock curriculum that is clearly Boegehold’s agenda for PSA, this album provides much more in the way of variation, originality, experimentation and, well, outright chops. The hooks are everywhere, the performances are as stellar as you would expect, the arrangements often very intricate and the power of the composition and production is much more compelling. Compelling in a slightly different way to Spock’s, but close enough to be a legitimate sibling, rather than a twin.

Opening track ‘Raining Hard In Heaven’ begins the album innocuously enough, with a straight-ahead pop-rock groove. More of the same, then? Not at all – soon enough a dizzying instrumental mid-section makes the clear statement that these four Progmeisters have not forgotten their lineage. Far from it – the section dazzles with mystifying alternate bars of 7/8 and standard timing and is as good as any arrangement recently released in Prog. Keegan is head of the class here, controlling the rhythmic multiplicity with magnificent snare work and highly intricate tom fills, the likes of which only he can deliver. Leonard’s prowess as a vocalist goes without saying, but his extra ability as a lead guitarist is emphasized in the solo. An unexpected gentle last passage, featuring organ, full harmonies, great majesty and Leonard singing at his angelic best, will warm your heart like a lullaby to a child. If this is a sign of what else is in Boegehold’s incubator, PSA is undergoing a re-genesis.

‘Here In My Autumn,’ already released as a single with very good reason, is a stand-out track. The refrain ‘Here in my, here in my, here in my autumn…’ is as good a hook as Leonard has ever had to sing, and he has sung a few – some by the best hook-writers in the world. The word ‘infectious’, used in the album’s press bio, does not even begin to describe how irresistible this chorus line is. Think Jellyfish at their best. Not only that, but the composition also features a symphonic instrumental and guitar break that provides agreeable variation, but does not abandon the central theme. Take a bow, Mr Boegehold.

‘Elegant Vampires’ is simply huge, and Dave Meros is the reason. If you thought that Meros could not create a bass sound more sinister and gritty than he has done in the past, think again. I, for one, have never heard a bass guitar sound quite as aggressive as this. An exploration (often in 7/8 time) of power-laden melody built around Mero’s utterly terrifying, growling bass, this song is another winner. Meros is such a distinctly underrated but important presence in Prog that he deserves further mention. An assertive production that reveals the giant that is Dave Meros, ‘Elegant Vampires’ should be a contender for the next single and if so, it might just line up as Prog single of the year. Take your bow, Mr Meros.

‘Why Don’t We Run’ starts with a North African pipe and drum vibe and culminates in a trumpet solo. (Yes, you read that correctly – trumpet.) The song conjures images of a desert tribe running from marauders, and it is very effective in doing so. If there is any song on which it might be said that Boegehold succumbed to the temptation to over-experiment with instrumentation (and a little repetition), it is this one. But that does not mean it is not enjoyable. On the contrary, I can live with having my traditional Prog ears distracted by a few unusual sounds here and there, together with an ear-worm chorus. The rest of it is all just good Prog-pop, as required.

‘Lifeboat’ is a dramatic 17-minute Prog epic with precisely the theme that its name would suggest. It is this keyboard-driven song that is the most sentient, and perhaps the most reminiscent of Spock’s Beard circa 2015. After alerting us to the sad destiny of the ship, the second section of the song – the passenger’s agonized perspective of the shipwreck – is a powerful exposition of Leonard’s vast vocal and lyrical prowess. Delivered over an anguished keyboard melody and then a pounding Meros bass thump, a symphony of harmonic and instrumental creativity emerges. The epic has several different parts, all swirled together like the currents in the dangerous ocean that has caused the protagonist’s circumstances. The vocal prodigy that is Ted Leonard is the anchor – Leonard really has become a force to be reckoned with in Prog, and this song amply shows it. The simple line ‘Save me’ is sung with such emotion by Leonard as to tear at the listener’s heartstrings, and his guitar solo is perfect for the moribund theme of the song. Boegehold does a full show and tell of a tapestry of new sounds like seagulls and waves (and various instruments like flute and trumpet) and this time the sonic variation works to perfection. We are left wondering as to the fate of the wretched passenger.

Do you know the warm feeling that happens when your child brings home from school a drawing so beautiful and intricate that you can almost not believe it? Closing epic ‘Soon But Not Today’ will give you a similar feeling. This is the true culmination of the album, and it is progressive to its core. Beginning with the most beautiful melody on the record, followed by all sorts of juxtaposed aural variation, the song will satisfy every musical need you might have. Meros’ bass-lines in the up-tempo parts are as menacing as a playground bully (and you are the new kid.) The vocals and instrumentation roar and whisper, sounding like the band probably got together and tracked them dynamically at the same time, with the express intention of throwing every influence they have, into one track. The result is a song that will please fans from Boston to the Beard to the Beatles (the song contains a long and very clear homage to the latter.) There is even a quick bar of Queen’s trademark Brian May guitar sound. Keegan, a true superstar drummer (too easily overlooked by the music industry due to his fame as a child-actor) drives many parts of the song, in close tandem with Meros. From foreboding choral voices to Sergeant Pepper horn interludes, from Keegan’s dazzling percussive energy to Leonard’s heart-wrenching solitary vocal lines, from gentle string melodies to overwhelming might, this complex song will fill your musical void no matter who you are. Boegehold’s skills as a composer and arranger are exposed to the full here, and his excellent keyboard playing is also not to be overlooked. It honestly doesn’t get much better than ‘Soon But Not Today.’ A magnificent, eclectic ending to an already superlative album.

With typically gargantuan production from Boegehold together with the legendary Rich Mouser, the sonic values of this album will continue please you long after your ears have tired. A true master of his craft, Mouser must be singled out for special mention. From sounds that you have never heard, to the good old Moog synthesizer, there is something about Rich Mouser’s mixing and mastering skill that makes albums entrusted to him sound truly unique. Expect to have your auditory senses overjoyed.

If you, like me, were not overwhelmed by PSA’s debut, you should expect much, much more from this release. If you were one of those who loved the debut, then you should expect to be elevated to Nirvana by the follow-up. Either way, let it be known that Messrs Boegehold, Meros, Keegan and Leonard have delivered a sophomore album to be extremely proud of, even by their lofty standards. This child has progressed to the top of its class, and its latest work gets a clear and definitive A+.

Releases on May 15th, 2020 on InsideOutMusic

Key Tracks: Here In My Autumn, Soon But Not Today

The track-listing reads as follows:
1. Raining Hard In Heaven
2. Here In My Autumn
3. Elegant Vampires
4. Why Don’t We Run
5. Lifeboat
6. Soon But Not Today