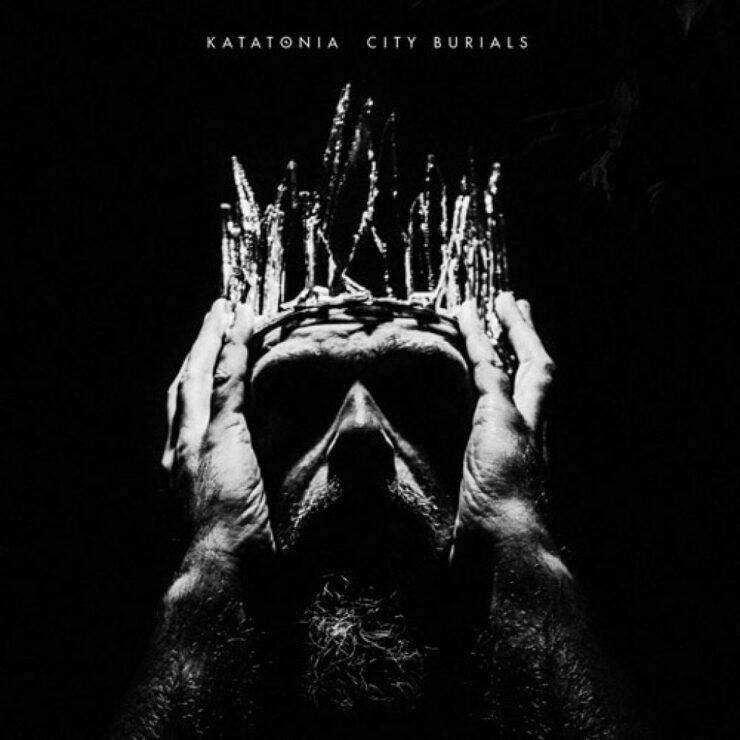 When it comes to dishing out magnificently atmospheric and arresting melancholy, few do it better than Swedish progressive metal quintet Katatonia. Led by the distinguished and invaluable voice of Jonas Renkse, their initially brutal aesthetic soon gave way to far more bleakly tranquil, luscious, and melodic dispositions. To that end, 2016’s The Fall of Hearts was a splendid testament to how suitably and invigoratingly newcomers Daniel Moilanen (drums) and Roger Öjersson (guitars) fit into the already revered Katatonia dynamic; thus, it’s no surprise that City Burials doubles down on that promise. Perhaps a tad more mellow and inventive overall than its predecessor, City Burials by no means rewrites the Katatonia formula. Instead, it offers a continuation of their tried and true sound, resulting in some of their most handsomely poetic, cohesive, and somber pieces to date.

Although fans pretty much know what they’re getting with every new Katatonia release—by this point, their style is both wonderfully distinctive and wholly foreseeable—the fact that founders Renske and Anders Nyström (guitars/backing vocals) can still provide such intriguing, tasteful, and cathartic material is nonetheless laudable. Indeed, City Burials an especially well paced and organized examination of “loss and ruin” that was written mostly by Renske (although he maintains that Nyström was still deeply involved in production and quality-control). Specifically, the LP revolves around “the intensity of fragile emotions unsettled by the passing of time.” In the official press release, Renske explains:

Because we’re [Renske and Nyström] both from Stockholm, we grew up here and we explored it when we were younger. . . . We don’t know all of it but certain parts of this town are very well known to us. I was thinking about it once when I was walking through where I used to live when I was a kid, and I started thinking that I had so many memories from certain streets or even specific houses in this particular part of town, and I thought that everything that’s a memory now feels somehow buried. Every memory is a loss, in a way, because it’s something you can’t grab anymore. We’re reaching that age where the end of life is within our reach, so maybe you start thinking about the things you’ve seen and experienced.

Right away, City Burials envelops you in Katatonia’s characteristically gorgeous and sharp sorrow via opener “Heart Set to Divide.” After a preliminary helping of ethereal soundscapes surrounding angelic harmonies and forlorn conclusions (“I opened my mind to all the love forsaken / You saw my white flag / You saw our shadows merge”), an onslaught of crushing rhythms and riffs introduce more turmoil before being interwoven into that core serenity. However predictable, it’s nonetheless breathtaking, and fortunately, this celebrated balance of softness and heaviness is upheld for much of the runtime. For instance, “Rein” shuffles around piercing and plaintive movements prior to “The Winter of Our Passing” adding a bit more digital spice and percussive experimentation to the mix. Later, “City Glaciers” is succulently accessible and classy—preserving a constant temperament—whereas “Flicker” features more polarized extremes of heavy metal outrage and subjugated electronic lamentation. Of course, closer “Untrodden” caps it all off with truly beautiful final pleas wrapped around a triumphantly impassioned guitar solo.

Elsewhere, the LP leans more strongly toward purely blissful heartache. In particular, “Lacquer” uses programmed beats, subtle strings, and a few simple motifs as a relatively sparse backdrop for Renske’s heavenly multilayered declarations. If not for its faint piano notes and spectral sound effects, the immensely commanding “Lachesis” would be a devastating lone vocal performance. As elegantly peaceful as those two tracks are, though, it’s the centerpiece, “Vanishers,” that captivates most due to its stunning duet between Renske and guest vocalist Anni Bernhard (Full of Keys). Without a doubt, it’s one of the most awe-inspiring compositions Katatonia ever created.

Like virtually all of Katatonia’s recent records, this one exemplifies the notion that “if it ain’t broke, don’t fix it.” Those familiar with City Burials’ immediate predecessors will find little here that’s unexpected or daring; yet, it accomplishes so much in terms of perfecting what the quintet does best that it’s hard to come away disappointed or slighted. For my money, it’s a more enchanting and affective outing than The Fall of Hearts—which is really saying something—and another indisputable reason for why Katatonia are still the masters of exquisite melancholy.