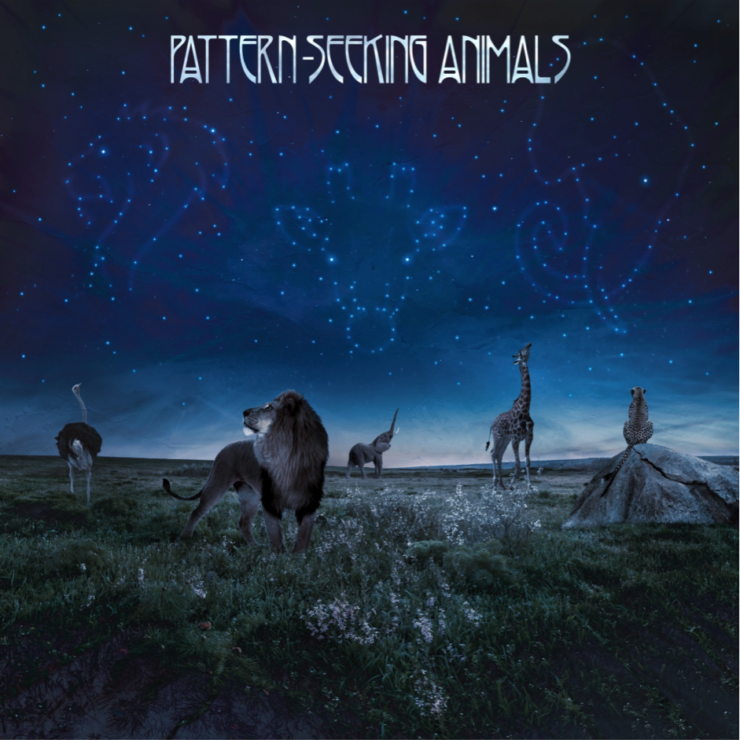 Review of the self-titled debut album from Pattern-Seeking Animals out on July 5th, 2019.

Pattern Seeking Animals (PSA), is the new band comprising one alumnus and two members of Spock’s Beard, as well as one of the Beard’s main contributing composers/producers, John Boegehold.  It appears that Boegehold is the band’s main driver of this new band, created to ‘explore different avenues’, with current Beard members Ted Leonard on vocals and guitar, Dave Meros on bass, and ex-Beardie Jimmy Keegan on drums and vocals. Leonard and Meros also lend their compositional skills to the project. And now the band is set to release its debut album.

As one would expect, the chemistry between these players is immediate and obvious. But it is a chemical reaction of a different kind; no ‘Gentle Giant’ harmony counterpoints here, no stupefyingly explosive time-signature changes. No ‘Beard-ness’. But there is a chemistry of another type – one that boils in a more understated way to the surface of the flask. And the mixture is designed to simmer, rather than to detonate.

Opener “No Burden Left to Carry” promptly makes a statement that these proggers are prepared to try something expansive and fairly complex, but also are intent on finding a different sound while doing so. In places, Boegehold’s keyboards do remind us that he may have written many of the riffs previously executed by his legendary Japanese counterpart, but here it finds its own voice. The song is layered with strings, harmonies and the familiar vocals of the multi-talented Ted Leonard, here filling the role of lead guitarist.

“The Same Mistakes Again” is a Leonard-driven ballad with a slightly AOR ingredient entwined around a massive Keegan snare drum sound. The melody here grabs the listener right away, while the emotion in the chorus provides a worthy payoff.  This song showcases the different course that this group is intent on taking with this album.

“Orphans of The Universe” begins with a spacey keyboard riff that leads to a far more fulfilling experiment. It has a lengthy instrumental introduction that allows Boegehold and Leonard to pour lots of combustible chemicals into the pot. Its extravagant Prog arrangement, including several excellent instrumental breaks in 15/8 timing, makes it the longest song on the album at well over ten minutes, and surely the type of experiment that the band should continue to explore on their second album (apparently already being recorded.) The song is the best Prog concoction on the album, and for many Classic Prog fans, “Orphans” will be the song that lights the fuse of connection to the music they love.

‘No One Ever Died And Made Me King’ is one of the highlights on the album. Based on a simple but powerful Leonard guitar riff (played in Deep Purple mode) and wonderful vocal delivery, the song is instantly gratifying, though it has the potential to have been allowed to ferment and develop into a longer and grander arrangement – the raw materials are certainly there do have done it.

“We Write The Ghost Stories” is a short molecular journey with jerky jabs and stops courtesy of Keegan and Meros, based on a solid, crunchy Leonard guitar line, while “No Land’s Man” is a little more cheerful with a bouncy pop feel. No one can accuse PSA of not wanting to provide instant gratification. It will be fun to watch this song performed live.

The album as a whole is comprised of six short songs and two longer experiments around the ten-minute mark. As a composite work, do not expect thematic recurrences or overtly Prog delivery. This is a collection of pop/prog songs done in a way that feels familiar, yet is still new. If you are hoping for Spock’s Beard’s unique incendiary Prog quirkiness, you might be disappointed. If you are not, and you are prepared to listen to the album as its own new entity, there is a lot to enjoy here.

Key Tracks: No Burden Left to Carry, The Same Mistakes Again, No One Ever Died and Made Me King

Released on July 5th, 2019 on InsideOutMusic