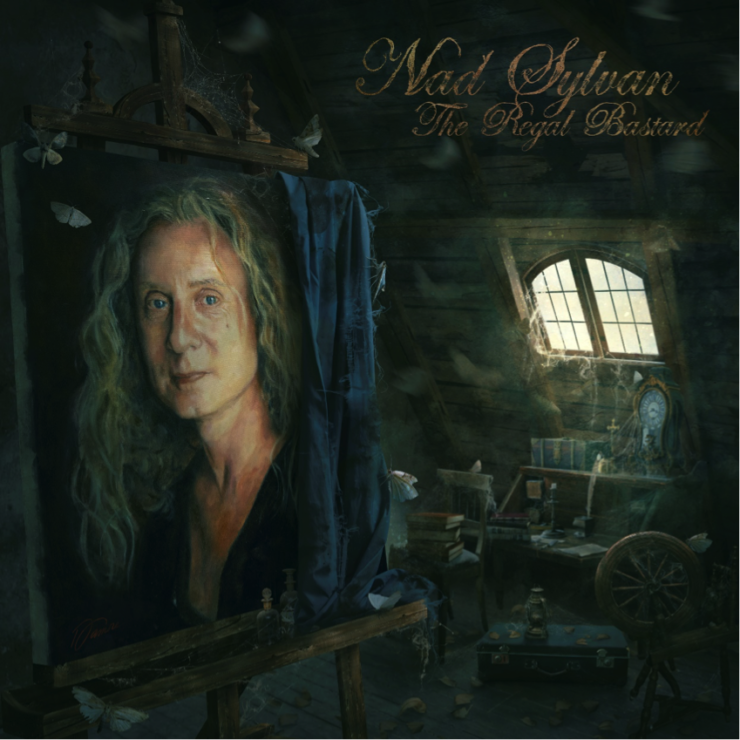 Review of the new Nad Sylvan solo album ‘The Regal Bastard’ out on July 5th, 2019.

While many of prog’s greatest albums have come from traditional rock bands, there are also many that draw from the singular vision of one person, aided by a range of collaborators. This album, the final part of the Vampire trilogy, is the latter, the visionary in this case being Nad Sylvan. Having been involved in music for many years, Nad’s prog prominence grew from the Unifaun album, to Agents of Mercy, to being the go-to vocalist for Steve Hackett, particularly when he reached back into Genesis material.

However since 2015’s “Courting The Widow”, Nad has realises his personal musical visions through a series of albums, where his own ideas are drawn upon by a range of musicians who add their elements before the final work is crafted by Sylvan. I should say at the outset that despite his history, don’t be expecting a faux-Genesis album – Nad’s influences and style is much broader than what you might assume… and, in fact, what he produces doesn’t quite sound like anyone or anything else!

Excluding the two bonus tracks, “The Regal Bastard” is a 45 minute finale to the trilogy, but it’s not necessary to have heard the prior albums to enjoy this album. The breadth of what you encounter here musically and stylistically means it’s a rollercoaster of an album. The epic “I Am The Sea” kicks the album off in epic style, with interesting rhythm styles underpinning the enormous range of Nad’s vocal styles, plus the bonus of a incredible guitar solo by Guthrie Govan. Funkier influences are apparent in “Meet Your Maker”, powered as it is by drummer on most of the album, Nick D’Virgilio, paired with bass legend Tony Levin, and sprinkled with female vocals – that aside everything else in this track is the work of Nad himself (many may assume he’s “just the singer” but the crazy keyboard parts and angular guitar is all his own work). This album blends its prog with pop, soul, and r’n’b, rather than the metal riff you find in heavier aspects of the genre – so it’s one for those of you who prefer the melody to the shred!

The epic title track is a multi part, orchestrated epic, that shifts through a number of phases, including a breakdown powered by Jonas Reingold’s bass followed by a brief but wonderful guitar solo from Nad himself. In fact, this track, which leads into the album’s two final tracks, is an incredibly strong 20 minutes of music. The final song, “Leave Me On These Waters” is beautifully restrained and incredibly melodic, with Nad’s vocal going from its depths to its heights – this track is an amazing showcase for everything that is great about Nad’s voice. The last track is an instrumental called “Honey I’m Home” which begins with a wonderful Moog-style keyboard solo before his part-time boss, Mr Hackett steps in to play some lyrical guitar with a tone that suggests and compliments the aquatic themes of the album (you’ll know what I mean when you hear it!).

With the album proper over, there are also two additional songs which sit outside of the concept, but as welcome add-ons. “Diva Time” is a bit like a darker, prog ABBA track in some respects – and I mean that as compliment, based on its strong chorus and melancholic lyric. If you’ve heard me on the podcasts, you’ll realise I hail from Ireland, and so Nad’s version of W.B. Yeats’ poem, “The Lake Of Innisfree” is something that I enjoyed a great deal. It contains perhaps the most Genesis-y moments on the album, with picked acoustic guitars and bass pedals – a beautiful conclusion.

This is an album whose rich textures mean that repeated listenings reward the listener with deeper insights. It is a carefully crafted sonic experience with precision instrumentation and is a superb showcase for Nad’s vocal, compositional and arranging talents.

The trilogy has ended on a real high – where to now, Nad?

Key Tracks: I Am the Sea, Whoa, The Regal Bastard