The Aristocrats – You Know What…? (Album Review) 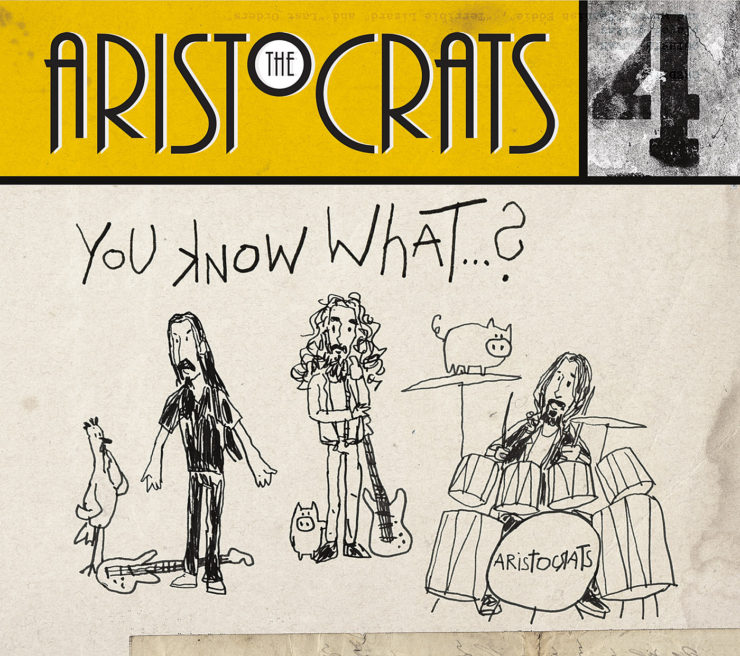 Review of the new album from The Aristocrats – You Know What…?

Every fan of instrumental rock music should be familiar with The Aristocrat, the band Guthrie Govan on guitar, Bryan Beller on bass and Marco Minnemann on drums. The trio is well known for mixing elements of fusion, jazz, progressive rock with a pinch of their diverse creativity to create some very interesting music, to say the least. Each of the members is singularly considered to be some of the best among their instruments and are acclaimed for their work with other artists. After releasing their first record, the self-titled The Aristocrats, the band went on to produce two more excellent albums – Culture Clash and Tres Caballeros. One of the many unique characteristics in the trio is how well they are able to translate their personalities and humor into their song writing. It always feels like you’re in on their jokes and it’s a treat to listen to. And this year, they’re back with a new studio album called You Know What…?.

You Know What…? doesn’t have a very distinct different vibe from its predecessors, but you know the saying “if it ain’t broke, don’t fix it”. It starts off with the hilariously titled “D-Grade F**k Movie Jam”. This high energy track serves as an intro to put you in the mood for some good instrumental action. Guthrie Govan heavily uses his wah pedal to great effect and with his tone sometimes reminding us of Tom Morello.

Second song on the album, “Spanish Eddie”, is for sure up on the list for my favorite The Aristocrats tracks. The main riff for the song is extremely fun as are the confusing breakdowns. It’s a great showcase of skill from the trio since it lets each band member show off their strengths. This is especially apparent midway through the song in the jazz section before it jumps back to a heavier part reminiscent of Steven Wilson’s “Raider II”.

“When We All Come Together” completely shifts gears and introduces a hoedown rhythm and melody mixed with jazz fusion elements. And it works! That’s everything I never knew I wanted. It is then followed by “All Said and Done”, a slower and shorter track as Govan invokes his inner John Mayer to make an absolute enjoyable tune.

The Aristocrats then turn on their rock n’ roll mode and deliver “Terrible Lizard”. Heavy King Crimson style riffs are coupled with Minnemann’s insane beats in this beast of a track. “Spirit Cactus” continues the progressive rock feel with an incredible main theme performed on brass. This song manages to be very energetic while introducing some of the most beautiful parts of the album at the same time. The performance is filled with feeling.

“The Ballad of Bonnie and Clyde” is another shining example of how amazingly well the band structures their songs. In elegant form, it starts slowly but keeps on building. Introduces many themes that are insanely complicated and technical but mixes with some simpler ones that are just as effective.

In the final stretch of the record, “Burial at the Sea” is a fantastic track and highlights the amazing sound production in You Know What…?. It is one of those albums that has to be listened to with some quality headphones or speakers. The album then closes on a high note with “Last Orders”. Both drums and guitars take a back seat and serve to complement Beller’s incredible performance on the bass. The song goes off in the middle section with the trio in full strength but it ends with a beautiful slower melody accentuated by the band’s synergy.

With another star record added to their catalogue, it’s easy to say The Aristocrats are one of the top names in instrumental music nowadays. All in all, you’d think that with such a variety of styles being tackled it’d be difficult to keep the quality. However, The Aristocrats continue to put out excellent material in their 4th outing. You Know What…? is a surreal musical experience and just feels like the three members are inviting us to their jam session. I know 2019 has been an excellent year for music with great albums coming after great albums, but this is one you have to put on your list.

Tracklist:
D Grade F*ck Movie Jam
Spanish Eddie
When We All Come Together
All Said And Done
Terrible Lizard
Spiritus Cactus
The Ballad Of Bonnie And Clyde
Burial At Sea
Last Orders