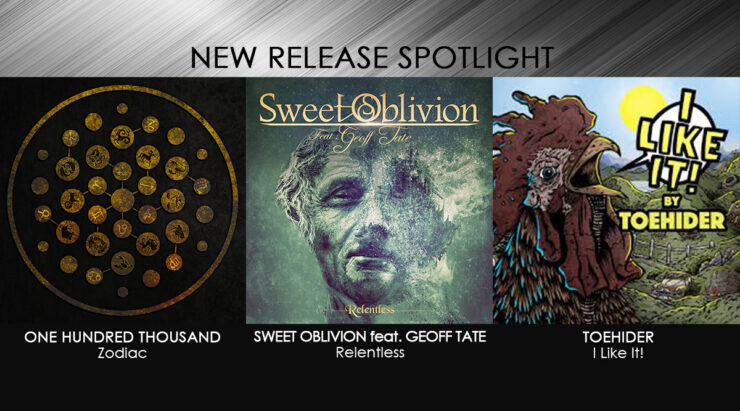 New Jersey-based hard rock group One Hundred Thousand have created a deep and though-provoking concept album with Zodiac, an album inspired by the classic character traits of each sign of the zodiac. The lyrics trace a protagonist’s path from a devastating personal loss, through the illusion of hope to an enigmatic finale over the course of one year. The band also released each song from the album separately as singles over the past year during the pandemic. Now it is officially released as a full-double album both digitally and on vinyl. The production is stellar and the vocals are top-notch. Zodiac is a unique album experience with great hard-rock melodies and one worth checking out.

“Relentless” is the second album from Sweet Oblivion, the metal project featuring legendary ex-Queensrÿche vocalist Geoff Tate. The self-titled debut album had a great response in the rock community because it returned Tate to his prog-metal roots and this album continues that approach. While the production and main songwriting on the previous record were handled by Simone Mularoni of DGM, this time the production was instead handled by his fellow Italian metal maestro Aldo Lonobile (Secret Sphere, Timo Tolkki’s Avalon, Archon Angel) with Tate more involved in the songwriting. Songs like “Strong Pressure”, “Wake Up Call”, and “Another Change” perfectly recall early Queensryche. The song “Aria” sung in Italian offers something a bit different but works quite well. Fans of Tate’s work in Queensryche’s early days and of the previous Sweet Oblivion record will find a lot to enjoy here.

Toehider is the collaborative project between singer/multi-instrumentalist MIKE MILLS & graphic designer ANDREW SALTMARSH and ‘I Like It’ is the 4th full length studio album and 20th overall release (after a series of 12 EPs in 12 months kickstarted the project a decade ago, along with a few more along the way). Released originally in late 2020, the album is out now 2LP/CD SET on April 2nd, 2021 and released in North America. The collection of tracks on ‘I Like it’ showcases Toehider’s diverse influences, blending 80s pop/rock & metal, with Mike Mills’ trademark vocal gymnastics, modern prog guitar wizardry, and more. You can hear the incredible diversity in the first 2 tracks alone from the opening thrash/prog insanity of “Go Full Bore” to the disco-pop vibe of the second track ‘wellgivit”. It just continues from there with as many genres and styles as you can think of. Definitely an album that will make your head spin.