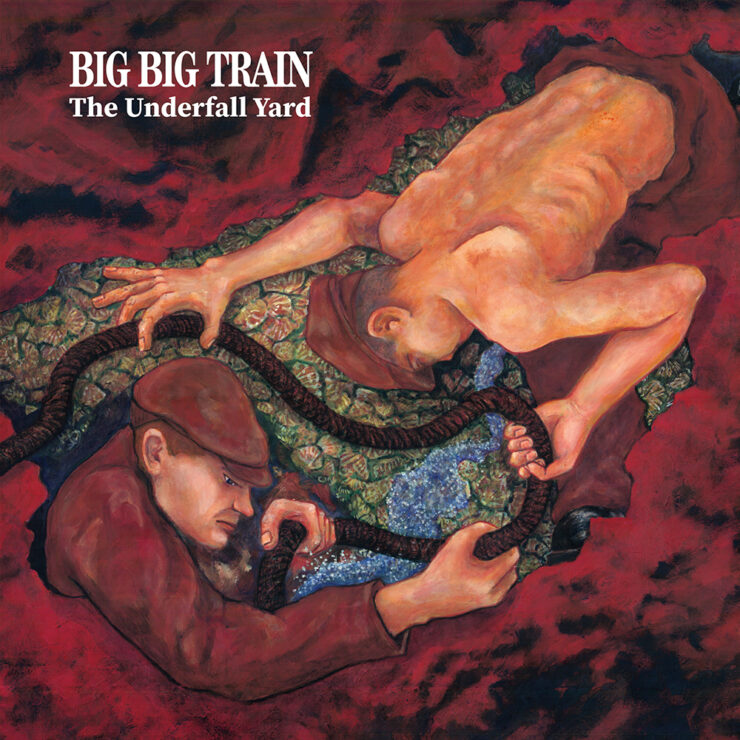 Review of Big BIg Train – The Underfall Yard reissue, out on April 9th, 2021.

My personal journey aboard the Big Big Train began in 2007 with The Difference Machine. I’ll admit that the initial attraction was the guests who appeared on the album (Trewavas, Meros and D’Virgilio) but I ended up enjoying it a lot.

That made the decision to buy its follow up, The Underfall Yard, an easy one. The new singer, David Longdon, was known to me from Martin Offord’s fantastic swan-song album, The Old Road, and XTC’s Dave Gregory brought fantastic credentials, along with NDV on the whole album this time. It was very clear from the first listen that this album was BBT on steroids, with horns and cellos, and songs that demonstrated a breadth and depth they’d been building up to. From the simple beauty of “Last Train” to the epic twists and turns of “The Underfall Yard”, this was a whole new thing – and I loved it!

Scroll forward and it’s 2021 – six full albums and a few EPs have come from largely this same line up, along with 3 live outings where many of The Underfall Yard songs have been brought to life on stage. With TUY having reached its 10th anniversary, plans were set in motion to revisit it, not least to get it on to the vinyl format. However the project snowballed from a “polish” to producing the fantastic new package that is The Underfall Yard 2020. So what does that include?

Well for a start there is a remixed version of the original album. There is no doubt that as their cache grew so did their access to budgets and facilities to create better and better sounding albums. So the revisitation had given the band and audio supremo Rob Aubrey the chance to give TUY the sonic treatment it deserved. If you’ve owned the album from day one, depending on how you listen to it you might not perceive a massive difference – but with a sound set up that does it justice it’s definitely a welcome refresh in which the benefit of time and familiarity has resulted in a great listening experience. There is some nice retouching, mostly replacing some synthetic instruments from the original with the real thing, and just a much better soundscape that gives every instrument the space to shine.

So what about the bonus disc? Well don’t worry – it’s not a case of collecting the scraps from the cutting room floor! “Songs From The Shoreline” starts the album – at 18 minutes long, it combines a re-recorded version of “Victorian Brickwork”, which follows the live arrangement of the track, with “Fat Billy Shouts Mine”, a song from the same time period that appeared on the subsequent Far Skies Deep Time album. The longer track works very well – you can see how another epic could have overpowered the original album, and so now you have the choice! Next up is a re-recorded “The Underfall Yard”, preceded by a Prelude which reflects some of the musical themes from the epic track, and played by the trusty BBT brass players. Like “Victorian Brickwork” it takes elements from the live arrangement to create a slightly different perspective on this iconic track. It’s not radically different, with the exception of the prelude, but it’s something that is great to have in this set.

The collection closes with “Brew and Burgh”, a brand new Greg Spawton song. I suppose there’s a risk that a song like this gets overlooked as a bonus disc “extra” – it’s not a crazy prog workout like some moments on TUY – but if you enjoy BBT at their most reflective and pastoral then this is the track for you. Lots of lyrical references to other BBT songs, but done in a way that it all makes sense. We now know it serves as the final outing of the Grand Tour line up, drawing a line under the particular evolution that began with TUY, and in that context it’s a very nice coda.

More than 10 years on, and having played these songs many times, I still find this album to be a prog tour de force. What I didn’t know in 2009 was the significance of the journey this album started. Of course today we do, and this fantastic reissue is the perfect way to celebrate this brilliant collection, which stands proudly manicured and dressed in its finery in its 2020 incarnation.

Post Script: To delver further, check out BBT’s The Underfall Yard micro-site https://www.bigbigtrain.com/underfall-yard/ and the fanastic Passengers’ Club whose regular releases in recent weeks have included some demos from the period around the making of this album which case it intriguing new light on the songs and the eventual arrangements/ recording.

The Underfall Yard is available from Burning Shed at www.burningshed.com/store/bigbigtrain