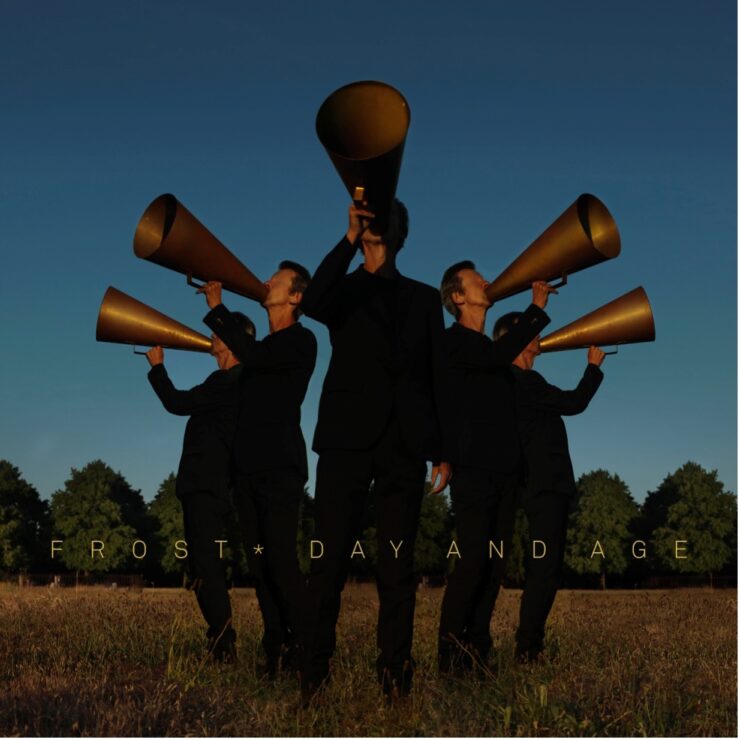 If you have ever attended a Frost* concert, you will know that the overriding requirement is that you ENJOY YOURSELF. The humor, irony, stunning musical chops and pure charisma of this band, quite honestly, make it impossible not to.

Hot on the heels of 2020’s EP Others, Jem Godfrey and his band of minstrels have finished a brand-new studio collection, called Day and Age, to be released in May 14th, 2021. An illustrious group indeed, Frost* is, after drummer Craig Blundell’s departure in 2019, now officially a three-piece, comprising Godfrey (vocals, keyboards and production wizardry), John Mitchell (guitar, bass and vocals) and Nathan King (bass, keyboards and vocals.) Three excellent drummers step in to fill the gap left by Blundell, namely Kaz Rodriguez (Chaka Khan, Josh Groban), Darby Todd (The Darkness, Martin Barre) and the legendary Pat Mastelotto (King Crimson, Mister Mister.) It is an impressive line-up indeed, and one thing is clear – these master musicians certainly know how to enjoy themselves.

Frost* have always presented a unique blend of startling musicianship, gigantic production and inimitable English humor. Their studio albums, while varied in style, have always been top-drawer, and their first album Milliontown is quite simply an all-time Prog classic. Latest release Day and Age is a cohesion of all these attributes, and is perhaps the first studio album to so openly exploit the band’s deep sense of irony and humor. It deals with some weighty themes, often in a jocular manner, but it never trivializes them. If the notion of ‘enjoying yourself’ sounds attractive to you, read on. But be warned – in Frost*’s world, the concept of ‘enjoying yourself’ can be visited in many ways, from the lightest humor to the darkest circumspection. This is evident with how the album begins, with a little girl’s voice inviting the listener to “enjoy yourselves” with a hint of sarcasm. There’s more to what she says, but this voice-over sets the perfect tone for the album, which then crashes in with a vengeance.

Opener and title track “Day and Age” is a full-throttle extravaganza co-written by Godfrey and Mitchell. Built around a suspense-filled harmonic guitar and keyboard riff, it is 12 minutes of relentless power and staggering progression, With an overwhelming back-beat, this massive track is everything that Frost* fans have come to expect, and more. Solid but Proggy, “Day and Age” is one of the most driving and well-constructed compositions you will hear this year. Special mention has to be made of Rodriguez’s drumming, which, while as solid as concrete, also features rarely innovative fills and cymbal work. The little girl returns in the middle of the song, only this time in a more sinister backing vocal superimposed over a crunchy Mitchell guitar riff, and under it all, Godfrey delivers the ‘enjoy yourselves’ motif in several guises. The song builds to several frenzied crescendos, retreats to disquieting stripped-back melody (all built around the core riff) and rises again to fever-pitch. Pure genius, the title track is as good as anything Frost* have done – even up to the standard of Milliontown. What a way to start the album.

Second song “Terrestrial” is complex, heavy Prog that is, again, right up Mitchell’s alley. Beginning with an angular keyboard sample quite unlike any other sound you have heard, it roars and grinds in various odd time signatures, ably handled by Todd, while not losing its sense of bleak melody, delivered through Mitchell’s warm baritone. It is patently Frost*, it is intensely Proggy, it is heavy and it is very satisfying. Are you enjoying yourself yet?

“Waiting for the Lie” takes the band to a gentler place, floating on keyboards and electronic sounds, with the vocalists all in fine voice. The song is built around a suspenseful Godfrey arpeggio and has a beautiful, spacey production. Not to be forgotten, the little girl returns at the end of the song to whisper ‘Wake up!’

“The Boy Who Stood Still” is the most visual and graphic song on the album. Featuring a voice narration by Jason Isaacs (Star Trek Discovery), it is the story of a boy that accidentally discovers his power to remain perfectly still and to fade away into disappearance until he ceases to exist as a participant in the human race, finally evolving into a watcher of humanity. Godfrey’s vocal and keyboard antics provide a result that falls somewhere between Milliontown and Falling Satellites, and it is a massive result indeed. King’s complex but tight bass runs are particularly powerful on this one, and the ‘enjoy yourself’ refrain returns, this time in the form of an American adult female voice.

“Island Life” appears to be about the notion of blindly enjoying yourself on holiday, but with a very ironic twist, analyzing the question whether people ever actually question their enjoyment. The lyric observes: ‘Did you ever dare to wonder why? Just shut your mouth, enjoy yourselves.’ The ‘apocalyptic ways’ in which people are kept happy in the lie of island life might be questionable, but the song ironically commands that they should blithely just accept and enjoy. The rocking composition and arrangement combine to make the song very intense and powerful, and the band truly thunders on this track. ‘Island Life’, which is filled with irony, questions and observation, rocks like a hurricane in paradise.

“Skywards” paints a bleak picture of wandering introspection and escape from the vicious circle of deception. Anguished chord progressions make it very cinematic, but it is Mastelotto’s massive, jagged drum patterns that truly complete this song. He really is a force to be reckoned with.

“Kill the Orchestra” maintains the bleakness, with all the vocalists sharing lead duties at various points. The song varies from immensely heavy riffs to quirky vocal meanderings, built on an angular melody. Godfrey seems to have made a conscious decision to vary Frost*’s various vocal sounds, and the technique works very well on this track. In typical Godfrey fashion, the lead wizard uses his legendary Kronos sampling skills to confer all kinds of voices and sounds. Suddenly, the harmonic theme of the title track is revisited in a slower groove, and then the most sinister voice you have ever heard growls: ‘Everything is ok. Relax…enjoy yourselves.’

“Repeat to Fade” continues the theme, only this time with a massive, unstoppable Mastelotto groove. The song is onomatopoeic, because it literally becomes a six-minute, strident repeat to fade. ‘Enjoy yourselves, you scum!’ roars Mitchell, as the song’s groove continues to grip like a vice. There are operatic vocals counterpointed over tortured wails and general Prog mayhem, all anchored by King and Mastelotto. One imagines that this is what John Bonham and John Paul Jones would have sounded like if they were playing Prog in 2021. The little girl (who is apparently never far away) gives a brief spoken interlude about subservience before the tortured chorus crashes in to fade away over a maniacal voice yelling ‘Enjoy yourselves! Everything Is ok, you scum!’ It sounds almost like it was shouted as a dying call by an angry, Napoleonic dictator about to meet his end, and then white noise suddenly ends the album with a whispered ‘Can you hear me?’ It seems to me that this is the re-appearance of the boy who stood still, but who knows? The whole thing is brilliant, scary and enjoyable – like the feeling a great sci-fi horror movie might give you.

‘Enjoyment’, then, whether through white-hot Prog, quirky arrangements, startling performances, cryptic themes or plain old British humor, is all part of Frost*’s DNA, and this album provides copious proof of this. With a nudge and a wink and more than a hint of darkness, ‘Day and Age’ is highly interesting, varied, powerful and, yes, enjoyable. Interestingly, there are no solos on the album, but despite this, it features more stylistic variation than the last few albums, possibly because of Mitchell’s increased compositional contribution. And of course, when it comes to audio quality, the album stands up with the very best, due largely to Jem Godfrey’s supreme production skills.

While highly technical, Day and Age is not as mathematical as parts of, say Falling Satellites, but it is more soulful and introspective. I would venture to say that this may be the band’s most adventurous album since Milliontown. Not just because of the buckets of musical prowess (which almost goes without saying with this band.) Not just because of the production (though it is as massive as anything Godfrey has done.) Not just because of the innovative composition (which is, as always, simply stellar.) More because of the amalgamation of all these things, combined with a conscious foray into new frontiers. Throw into the mix the use of three drummers, and the result is a highly enjoyable presentation of some very new musical and lyrical ideas. The album absolutely has that Frost* sound that we all love – in boat-loads – but it also has a little more of a varied perspective than we have heard before.

‘Progressive’ in the true sense of the word, Godfrey and his cohorts have reached very far inward to create Day and Age. It represents an iteration of Frost* that will not disappoint die-hard fans, and it might just conjure a whole new host of aficionados of experimental music. This is an immensely satisfying album in which to immerse your auditory senses, and yes – even in the darker moments, you will have absolutely no choice but to ENJOY YOURSELVES.