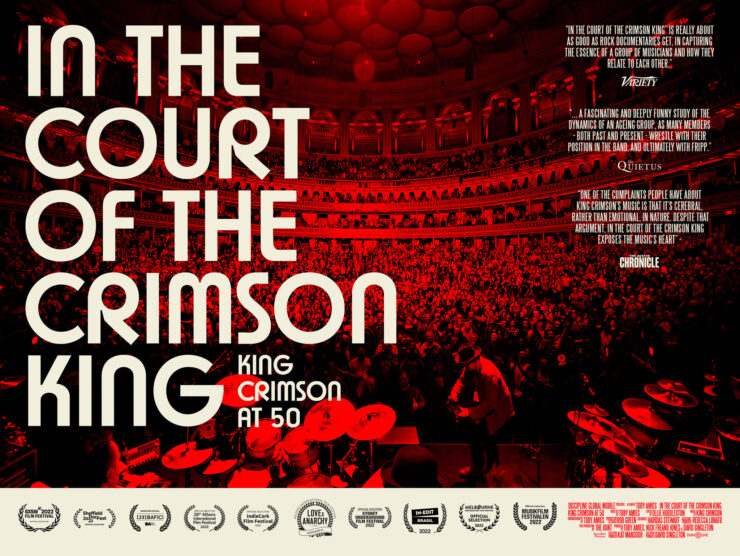 The movie will be available for One Day Only in select independent cinemas worldwide on Wednesday, October 19th.

DGM Ltd has announced the public launch of the highly anticipated documentary ‘In the Court of the Crimson King, King Crimson at 50,’ directed by Toby Amies (The Man Whose Mind Exploded). In a carefully choreographed global event, the movie will be available for One Day Only in select independent cinemas worldwide on Wednesday, October 19th, with a specially filmed introduction.

This will be followed on Saturday, October 22nd, by a special streamed screening in London, with live introduction by Robert Fripp and Q&A with the director and band members. The whole event and movie to be available live worldwide on the nugs.net platform and available through Video On Demand for a 24 hour period thereafter to allow for fans in different time zones around the world. A BluRay/DVD release and larger box set will follow, with never before seen live performances of the band, outrageous outtakes and hours of unreleased additional footage.

The film explores the “acute suffering” and transcendent glory experienced by current and former members of King Crimson, allowing the audience an intimate and sometimes uncomfortable insight into the musicians’ experience as they confront life and death head on in the world’s most demanding rock band. ‘In the Court of the Crimson King’ is not only a film about a group that has been creatively active for 50 years it’s also a film about music, why it matters, and the painful sacrifices artists have to make in order to create work that changes people’s lives, but with jokes.

In keeping with King Crimson’s independent, ethical, and iconoclastic approach to the music and entertainment business they have sidestepped traditional broadcast platforms in order to bring the film direct to their fans without further delay or compromise.

WORLDWIDE CINEMAS – OCTOBER 19
Tickets for the theatrical screenings will go on sale by Wednesday the 28th of September:
UK Screenings: https://www.everymancinema.com/events