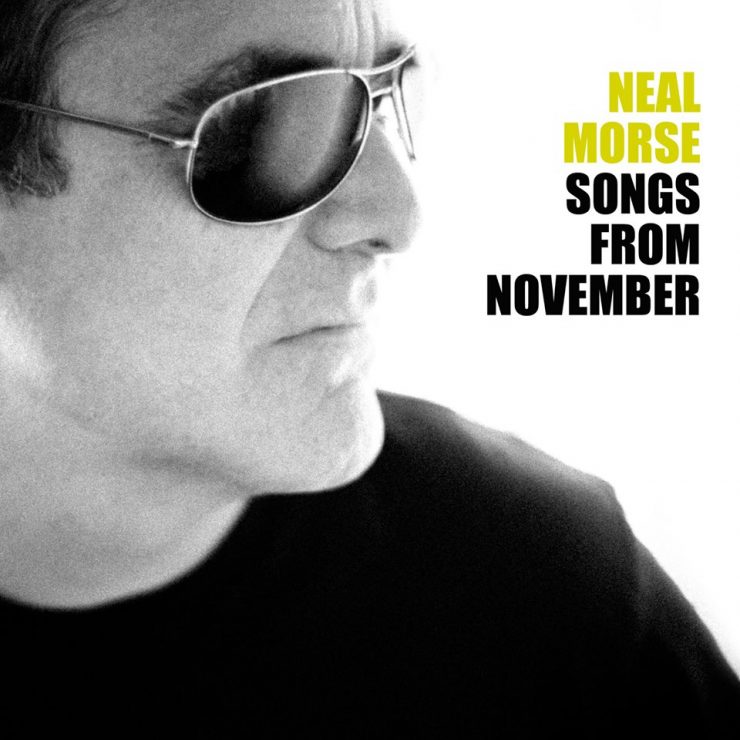 Review of Neal Morse – Songs From November, due out on August 18th on Radiant Records.

There is no artist in Prog or any genre that releases as much music as Neal Morse does. It seems like he is on about 3-4 albums a year, be it with one of his many bands or as a solo artist. And with every coming cd, comes the question, “How can he top himself this time?” Earlier this year, Neal was a part of the spectacular Transatlantic – Kaleidoscope cd and now comes his latest solo album. But as it has been described in earlier press releases and even on an interview with The Prog Report months ago, this was to be a singer/songwriter album, more in the vein of 1999’s S/T cd and 2001’s It’s Not Too Late.” For those expecting another collection of genius Prog with 30 minutes songs, I’m afraid that is not the case here. “Songs From November” is a collection of eleven 4-minute pop-rock songs. Mike Portnoy is also not on this record.  But despite the lack of Prog moments, this album is every bit Neal Morse.

The album opens with the rocker “Whatever Days” which is similar to “Living Out Loud from his self-titled album, although this one has a bit more of a Billy Joel type feel to it and even has the obligatory horn section. It sets up the album nicely and lets you know right off the bat this is not going to be your normal Neal Morse album.

Heaven Smiled, the album’s first single, is more of a traditional Neal ballad, like “Shine” or “We all need some light.” He adds a beautiful gospel choir to this one.  While there is some of his spiritual side that comes through here, as with everything he does, this is not a religious album.  With some of these songs, you can picture Transatlantic doing it and making it into a 7-8 minute opus, and this would be one of those.

What follows is the acoustic country flavored track, “Flowers In A Vase.” This is a different style than you get on his albums, but it is one of the more beautiful tracks on the cd.   The piano ballad “Love Shot An Arrow” is a powerful moment on the album and sounds like it could have been on Snow.

One of the best tracks on the album is the upbeat “Song for the Free.” The song kicks off with an acoustic guitar but evolves into a full on rocker with strings and harmonies. This is closest to something that could be on one his later solo albums such as Testimony. It really builds nicely and should make for a killer live song.   That song fades right into “Tell Me Annabelle” which one of the few darker tracks and recalls “Landslide”, also from his S/T album.

The surprise track is the very personal “Daddy’s Daughter” which might be overly sentimental for some, but is just a great song and melodically brilliant. You could see this being a sung at weddings and the like. For anyone that has kids, this one will hit home.  You can see this was a very personal record.  The album is filled throughout with short catchy tunes, many about his family and trying to spend time with them. The album closes with the driving Beatles rocker “The Way of Love.” It’s a great inspirational way to close the album. It has that big ending he is known for.

Neal Morse has been at the forefront of the resurgence of Prog. His music has influenced many and his songwriting has changed the way Prog music is written and perceived all around. But at the core of his music are simple, accessible melodies, and earnest, heartfelt lyrics. That is what has always set him apart. The incredible musicianship is just another added element. It has always been about the songs and the stories in those songs. That remains with this album. This time it’s just without the added solos and extravagant instrumental moments.  He proves here he doesn’t need a million notes to write a great song.  This is a collection of Neal Morse songs at his purest and most sincere. And it is a welcome addition to his enormous catalog.

Key Tracks: Song for the Free, The Way of Love