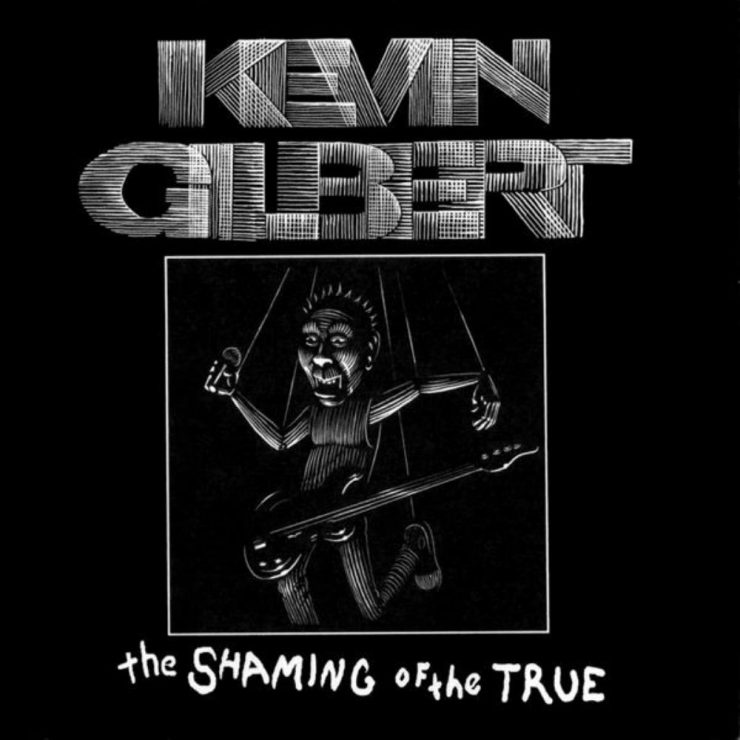 Once in a while you rediscover an album that you used to listen to and it reminds you why you loved it in the first place. Such was the case recently with Kevin Gilbert’s The Shaming of the True, an album that was released back in 2000, four years after Gilbert died. How did such a genius album get made?  I went directly to the man who helped make it happen, drummer and all around amazing musician Nick D’Virgilio. D’Virgilio was a friend of Gilbert’s and had played with him on a few projects including Gilbert’s album Thud and a performance of Genesis’ classic album The Lamb Lies Down on Broadway.

Some prog fans are aware of Gilbert’s work mixing and mastering some early material for Spock’s Beard. Prior to that, Gilbert had success working with Sheryl Crow (in fact they were a couple at the time, while writing songs with a group that met on Tuesday nights and dubbed themselves the Tuesday Night Music Club). As happens in the music business sometimes, Crow was lifted from that group and became a star seemingly leaving the rest of the musicians behind. Still, Gilbert was a co-writer on many songs on the album including the hit “All I Wanna Do” for which he won a Grammy. How this scenario all played out lays the groundwork for the story in The Shaming of the True, which tells the tale of a rock singer names Johnny Virgil and his rise to stardom, disillusionment with the business, and his ultimate fall. Gilbert would work on the album over many years, finishing some tracks and leaving notes and sketches for others. Upon his death, D’Virgilio felt compelled to make sure this album saw the light of day.

I was able to speak with D’Virgilio about the album and how it all came together.

“He had been working on that record for years before I ever met him. He had some songs from way back when he was in Giraffe that he reworked for that record. So I’m sure he had the story in his mind for a long time. And then as certain life experiences he went through, prior to me ever meeting him, he got inspired to write more tunes and to sort of try and start fleshing out the story of the whole thing. When I met him he played me a bunch of the stuff he had some of the demos recorded like “City of the Sun” which was pretty much already completed with Brian Macleod playing drums, and played me lot of the other stuff and pretty much right away I told him he should finish this thing. After we promoted his record third, we talked about it more when we were on the road. I was in his band doing promoting that record with him and I basically just bugged him all the time ‘you should do more for shaming, you should finish this record’. Finally, he was convinced to go in and start cleaning up some tracks, redoing some things, recording some fresh stuff, all that. He wrote the song “Certifiable #1 Smash” and we we started recording that one. Then we went into a studio and recorded the drums for that song and “Staring into Nothing”. So his inspiration was coming back to try and add some more things to this record.”

Gilbert then got distracted with a new project called Kaviar that D’Virgilio describes as “sort of like the time period we were in, the late 90s, mid 90s kind of thing, a little nine inch nails.” ‘Shaming’ got pushed to the side yet again. Just as Gilbert, D’Virgilio and MacLeod were getting that band off the ground, Gilbert died.

“Kaviar became the main focus and then he died. I was on the road with Tears for Fears at that same time when he passed away. I don’t remember exactly the date, but pretty much we knew we wanted to complete the record between his manager, John Ruben, and other people as well. We talked about it many times and said we should we should finish this thing. I had keys to his studio and I lived very close by it so I kind of took on the job of basically archiving all of his music and trying to find out what was there, what was completed, what wasn’t, because he had a ton of stuff everywhere. He wasn’t the most organized guy in the world that’s for sure, as far as writing down what he recorded where and all that kind of stuff. So I just went through everything, every dat tape, every two inch tape, every da-88 tape, and cassettes. It’s crazy; spent a lot of time going through everything. Somewhere in that period we decided that yeah, we should try and put out shaming, because we didn’t want people to forget about Kevin’s music really. We wanted to try and keep his name and his spirit alive and not take too long for it to get put out after his passing, so that was the start of it all. Between myself and the engineer-producer friend of that group named John Cuniberti, we just started talking about everything and figuring out what was there and what wasn’t and going through his notes and finding the song order he was thinking, and trying to make sense of the story.

“So once we sort of get started getting a handle on it and finding what was where and how much the music was done, we started getting together at his studio in L.A. and then on up at the studio that John Cuniberti worked out at the time up in San Francisco and basically just dove in feet first. At that point, about half the record was finished; I mean songs completely recorded that didn’t need anything, any additions, would have ruined the song. “City the Sun” was a complete track, there was no reason to add anything to that tune. It was already just great.”

Of the many highlights on the album, the standout is the 3rd track “Suit Fugue (Dance of the A&R Men)”, a gentle giant influenced, multi-layered vocal track, that is a comedic shot in dealing with record executives and the manipulating lies they tell artists. One of them even says, “dump the band, you are the face”. It was upon hearing this track that D’Virgilio began to urge Gilbert to finish the album.

“‘Suit Fugue’ was already finished. That was one of those things he’d had around for a long time. And that was when after hearing that for the first time I was going ‘man people need to hear this’. I think he knew it. My own take on it, nobody else’s really, is that at the time, in the mid-90s, progressive rock was sort of looked down at, what kind of music is? People wanted just grunge or the pop music of the day that was going on. So it wasn’t a music form that was being taken very seriously, except by guys like me. Spock’s Beard was already around at that time and we were going for it and we knew there was a following for this. I did The Lamb Lies down on Broadway with Kevin at a progressive rock festival called Progfest in 1994, when I first met him and it was a packed house. So he knew that that was it was still a viable thing. But for some reason it was hard to convince him.”

In the story, the lead character becomes famous and then begins to fall into the usual pitfalls of being a rockstar in Hollywood. One of the tracks that highlights that is the track “Fun”, which has a few similarities to the hit he wrote with Crow, “All I Wanna Do”, as it is about a guy meeting various people at a bar and telling about the life experiences which are not all that great. But as D’Virgilio tells it, the song is not a shot at the aforementioned hit or Crow. Although the album is obviously influenced by the experiences with Crow and her rise to fame.

“He brought her into that [Tuesday Night Music Club] and so he was trying to go down this commercial music road with her and that whole thing sort of fell apart for him. They were together as a couple and that kind of fell apart and it really definitely affected him in a big way. So you can kind of tell in ‘Shaming’, he didn’t name names specifically, but you could tell that there was some angst there because of what he went through. But “Fun”, it was a piss take on the music business and a lot of the things that he had probably seen in Hollywood. He’d been through a bunch since he first moved down there, so he pretty much seen everything, the good the bad and the ugly, so to speak. So you know it wasn’t a take off of that particular tune [All I Wanna Do] but it was sort of just a piss take on the whole music business at the time and where he was at in it.”

As far as how hard it was to put the album together, D’Virgilio said it wasn’t hard but it did take time.
“It was difficult but it was never too hard for me personally, it was never too hard emotionally. I just thought it was good and needed to be finished. So did John. So did the other guys. John Cuniberti and John Rubin definitely both felt the same way. We’d spent some time on it we spent months on it. You know there were timing issues on when we all could get together and studio availability and all that different kind of stuff. Once we started doing it we had to think about the sound of it all, make it a cohesive record. I replaced some of the old drum parts with just more up to date sounding things so it sounded like the same record. The one thing we were coming across was certain songs being recorded in many different time periods. It just sounded disjointed. Kevin wasn’t around, so we wanted to do the best we could as far as making it a cohesive sounding piece. It was just trying to really round out the sound so it sounded like the same record. We had to kind of go through things like that and figure out what if we could use what was there or if it was better to replace stuff, get some more cohesive sounds that would that would go from one track to the other and sort of fit better. That was sort of our idea with the whole thing at least.”

This is an incredible album worth checking out if you have not ever heard it. Gilbert was a huge talent that definitely left too soon.