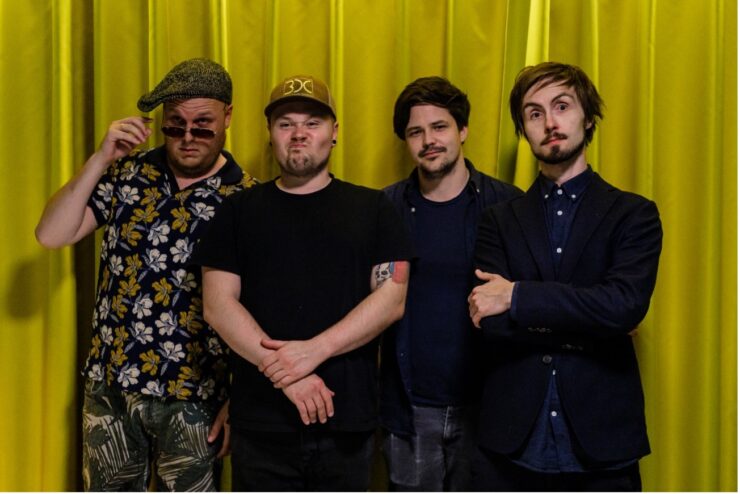 After all the waves generated with their album-of-the-year nominated record, A Boat on the Sea, in 2019. Moron Police are back in action with their new EP – The Stranger and the Hightide! A sidequest of sorts, letting the band experiment with different sounds, and build a bridge between their last record and their next one to come; a sprawling concept album tentatively called Pachinko…

The EP has just been released in all its tumbleweed blowing glory. Over the course of four adventurous tracks, the band explores new sonic territory as they build a bridge between their last record and their next one to come.

Frontman of the band, Sondre Skollevoll, explains:
“I had these songs lying around and they seemed to fit together, so an EP seemed like a nice thing to do. They sound too different to feature on one of our main albums, but they still deserve a home! It should be listened to in one go, as far as I’m concerned, as it’s got one of those patented book open/close thing that many prog fans seem to like (me too!). It will also connect with our next album lyrically, if not sonically. The EP is not indicative of what the new main album will sound like.”

With the release of The Stranger and the Hightide, Moron Police slowly build towards their next album, tentatively called Pachinko.  It will be a sprawling concept album that connects The Soul Train of the Damned from 2014’s Defender of the Small Yard to the newly released EP and beyond.

According to the band: “Things are not set in stone, as far as “Pachinko” is concerned. But we can divulge that there will be at least TWO 10-minute epics included, a weird concept story, a heavier sound, a softer sound, a more technical sound—generally speaking, it will be one heck of a ride. It will be the most ambitious thing we’ve ever done or attempted, and if we fail, we intend to fail gloriously. We hope you’ll be along for the ride!”

Pre-Order the CD or stream the EP now on your preferred music service here:
https://orcd.co/thestrangerep

Tracklist:
1. The Power of Jesus
2. The Stranger and the Hightide
3. Waiting for Wastelands
4. Parachutes