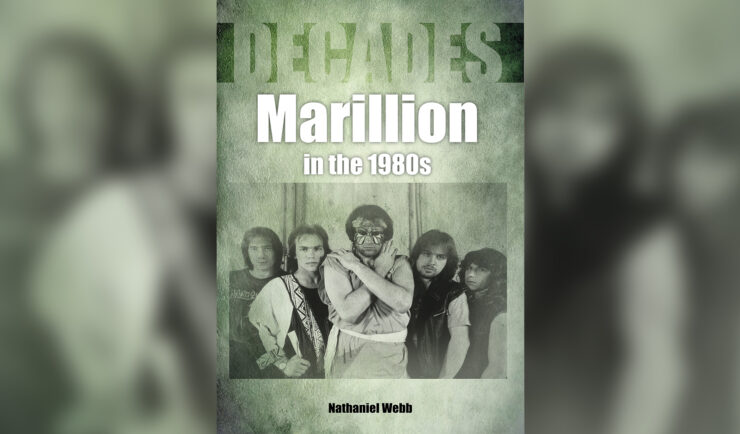 I’m a big fan of Sonic Bond’s Every Album, Every Track series which covers such prog bands as Yes, Moody Blues and Genesis. The imprint has just released a new variant on that format called the Decades series which focuses (yes you guessed!) on a particular decade in a band’s career. This new format gives the opportunity for a “deeper dive” into an era than the other format allows and the first edition kicks off with Marillion in the 1980s.

The choice of Marillion to start the series is a good one, focusing on a period when the band were, in many respects, the keepers of the flame for prog when many of the old guard bands were trying different styles or winding down. The book covers the period from the band’s formation right through to the Season’s End album, along with Fish’s first solo album, Vigil in a Wilderness of Mirrors, both of which had elements of carry over from the pre-split period.

Beginning with the early years, the book even delves into some of the early demos (mostly available to investigate on YouTube) of the Doug Irvine/ early Fish era, elements of which filtered into the first album and related tracks. Writer Nathaniel Webb, himself a musician, has done some brilliant research and brings a good balance of musical, lyrical and thematic analysis, as, in many cases, the subjects of the songs weave into the life of the band and its members.

As the band move into the pattern of regular album releases, the book moves through the track lists including b-sides and related tracks. Readers of this site will know the place that Misplaced Childhood holds in the “all time great prog albums” lists. The chapters that cover this album and it’s follow up, Clutching At Straws, provide detail background to the recording of those albums, the stories and themes they cover, and the stresses and strains that were developing within the band. It’s perfect material to read along with as you listen to the albums (I will admit I fired up the recent deluxe editions and did just that!).

I’m sure for some present day Marillion fans, this era is ancient history that doesn’t particularly relate to the present day band. However for anyone wanting to learn more about a band who were taking brave steps in a world where the genre they occupied was largely ignored if not reviled (but yet achieved commercial success in doing so), this book is an excellent guidebook for your explorations.