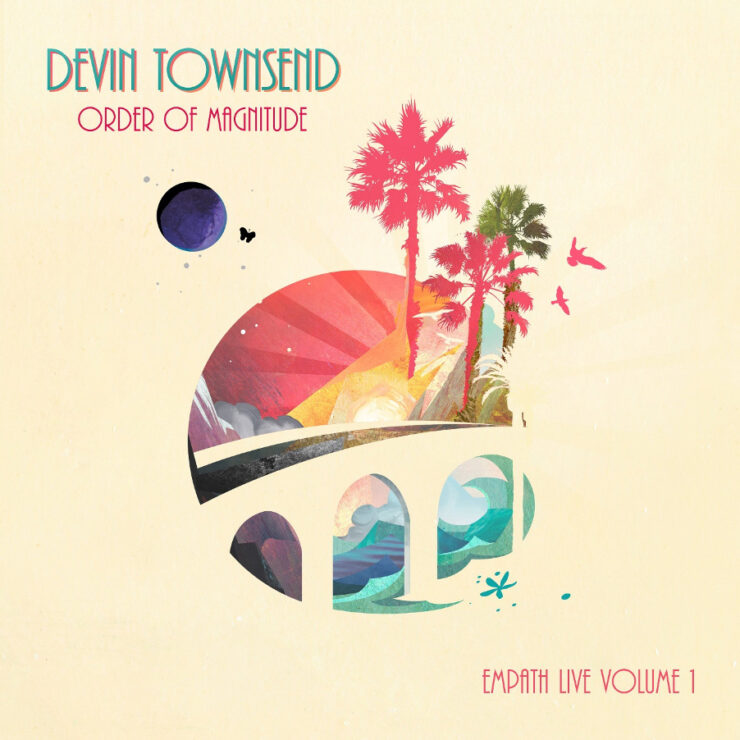 Review of the new live set from Devin Townsend ‘Order Of Magnitude – Empath Live Volume 1’ out on October 23rd, 2020.

There are many reasons for why Devin Townsend is among the most exceptional artists in modern progressive music. Be it his immensely original and boundless compositions, his charmingly self-deprecating sense of wit, or his imitable ability to juxtapose absurdist lyricism and existential quandaries, he truly is a one-of-a-kind creator. Of course, another component of that brilliance is his ability to put on remarkable live shows that unite everyone—audiences and musicians—in a visually stimulating collective celebration of life. His latest concert film, Order of Magnitude – Empath Live Volume 1, is perhaps the greatest example yet of that capability. Recorded in December 2019 at London’s The Roundhouse, the nearly two-hour show is a superbly varied glimpse at his catalog whose vibrant spectacle, stunning array of guests, and tongue-in-cheek banter capture everything that makes Townsend great.

To make the performance particularly unique, Townsend committed to using no backing tapes or click tracks, choosing instead to let everything happen organically. “You can replicate an album well if you’ve got [those things]. Imperfections aren’t eradicated but they’re reduced. I wanted to greet those imperfections, embrace them in a way I wouldn’t normally,” he comments in the official press release. Joining him on stage are a who’s who of musical elites, including drummer Morgan Ågren, guitarists Mike Keneally and Markus Reuter, guitarist/vocalist Ché Aimee Dorval, bassist Nathan Navarro, keyboardist Diego Tejeida, and singers Arabella Packford, Samantha Preis, and Anne Preis. Townsend reflects, “I was overwhelmed by the fact that all these brilliant people that I have so much respect for were willing to come together and play this weird shit with me. . . . It was clear to me that I could just have fun and be me and know that they would be effortlessly be able to follow that.” With the help of several graphical aids—a hanging mirror ball, digital projections, costume changes, and even an on-stage tiki bar—Order of Magnitude – Empath Live Volume 1 is arguably the most fun and stimulating show he’s ever put out.

Of course, much of Empath is replicated, with the countrified splendor of “Borderlands” kicking things off once the band appears as tropical background music plays. Expectedly, it sounds almost indistinguishable from the studio version—baby cries and all—and its followed by the more forceful “Evermore.” Later, “Sprite,” “Spirits Will Collide,” and “Castaway/Genesis” are replicated just as well (and often with touching or funny set-ups that, lest I spoil them here, are emblematically heartfelt and humorous). One of the best sections of the night is the audience participation approach to “Why?” wherein Townsend leads the crowd in a heartwarming sing-along (with unified hand-waving) that encapsulates the evening’s overarching message of life-affirmation and strength through solidarity.

Beyond that, Townsend and crew include a diverse array of pre-Empath treats. In particular, they do a kickass rendition of “War” from 1998’s Infinity, as well as a surprisingly lengthy Ki suite via “Coast,” “Gato,” “Heaven Send,” and “Ain’t Never Gonna Win.” There’s also the awesomely silly “Lucky Animals” from Epicloud, the chaotically cathartic “Deadhead” from the considerably underrated Accelerated Evolution (complete with clapping from the crowd), and fan favorite “Kingdom” from Physicist (which still houses as one of Townsend’s most incredible vocal performances ever). Along the way, they also dive into a joyous execution of The Trampps’ “Disco Inferno”—with some improve around Dorval’s delightful lead singing—and the transcendental “Gigpig Jam” that’s sandwiched between “Sprite” and “Coast.”

It’s quite a sight to behold, too, as several large screens display imagery both abstract and tangible depending on the song. All the while, a multitude of colors lights shift accordingly, and the players change clothing to fit the mood. There are also some stage props throughout to add even more of a festive vibe. True to their intention, these various changes yield surprisingly different environments and moods, be they the beachy free-for-all at the start; the chilling blue nightclub ambiance halfway in; or the warm mania of the concluding third. Really, virtually every track has its own visual vibe, so It feels like quite the journey by the end.

In a way, Order of Magnitude – Empath Live Volume 1 is the ultimate Devin Townsend live showcase. Its setlist is wonderfully wide-ranging and representative, and the fact that there are nearly a dozen people playing it all—most of whom are revered for their own outside projects—makes it more magnificent and endearing. Plus, its easily among the most ambitious and celebratory concerts he’s ever put on in terms of complementary assets, and it’s clear from start to finish that the band are having as much fun as the audience (if not even more). All in all, it’s an essential addition to Townsend’s legacy and a must-own for all fans.