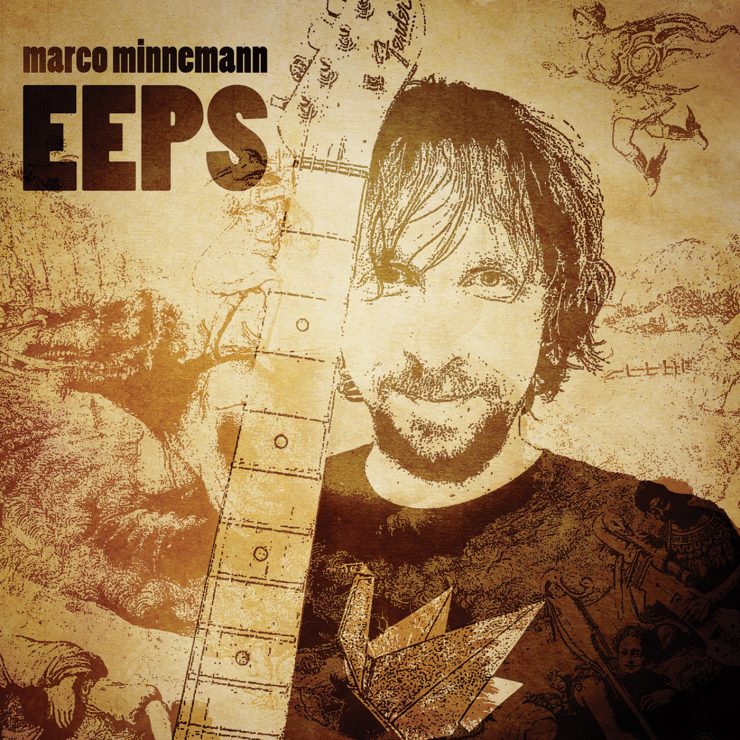 Marco Minnemann talks about his new solo album called EEPS, due out July 9, 2014, touring with Satriani and his band The Aristocrats.

Marco Minnemann (Steven Wilson, Joe Satriani, The Aristocrats, Levin Minnemann Rudess, etc.) has revealed the details for his solo album called EEPS, due out July 9, 2014.  The includes 15 tracks + 3 bonus cuts exclusive to CD and is described as having a signature sound and cohesive vibe of melodic rock, experimental/avant garde and prog, with a few pop songs thrown into the mix.  Not only an incredible drummer, Marco is a great multi-instrumentalist and he played all the instruments on this record.

We spoke to Marco about his new album, working with Joe Satriani and his band The Aristocrats.

You’ve been on tour for a while now with Satriani. Where are you guys now and how much longer is the tour? How has it been going?

Thank you very much for your compliments and kind words. The tour started already last year. The tour continues until the end of 2014 and there are already plans for 2015.

One thing that really is amazing at the Satriani shows is your drum solo. How long does it take to come up with something like that and does it change much from show to show?

That one changes indeed from day to day. I feel out the connection with the audience and I kind of tailor the drum solo to it. Like sometimes you can play crazy fills and you feel like the energy is going up when you do a lot of stuff and sometimes you slide in parts where you let the audience sing or kind of clap a little bit, then insert some acrobatics and then finish with some craziness again. There is like a certain recipe for that isn’t there? You kind of play with the audience depending on the concert hall, on the sound and the reaction of the people.

You also had a busy year in general also with The Aristocrats. How was the response to the second album? What’s next for the band? More music, touring?

That one went really good. The culture clash tour, which is still on going, is moving on to Asia in August, then we take a break in September and then we write for the new album which is going to be released on 2015. But for now, Culture Clash really did well and I think it was a huge departure from the first album because we got tighter as a band and more defined our style as a band.

Somehow you had time to work on a new solo album. Where did you find the time to do that and how long have you been working on it?

I’ve been non-stop working on songs. Even when I’m on the road, this is what happens. I bring my studio equipment with me. When I’m at home I record drums for it and all the other instruments happen either at home or on the road. So I write songs and then I define where these songs are going to go, like some amount goes to The Aristocrats, some goes to something like LMR, part of it goes to my solo records.

You’ve had a number of solo albums. On some, you have other musicians working with you. On this one you played everything. How do you decide on your approach for each album?

Honestly, on most of my albums I play everything. But I never refuse any great opportunity here and there when I find a great musician with a certain talent to feature them. So it varies you know. Sometimes I’m just feeling to be alone in this whole process and do this all by myself, or sometime I’ll allow access here and there if something falls from the sky.

Your music sounds very improvised, but I imagine when your playing all the instruments there has to be some planning. What is the writing and recording process for an album like this?

Well, actually, it’s quite very composed music. Everything is really mapped out. But you’re right with the improvised parts. Sometimes I have these things where I just sit down and play like an entire drum track but I have certain points that I want to go to and certain things are organized and later on I compose music to it. That happens here and there, but mainly, everything is really, really composed. If you heard songs like “Live Ghost”, or “Dead Ghost”, these songs are really planned out. And then there are songs like “Cheap as %^&* and Awesome as Hell” which are improvised. And then there is a song like “Right on time and out of tune” which is complete out of tune organized chaos I created. There are a few songs like that where everything is written out, everything is completely planned rhythmically and then the structure with the D-tuned instruments on top of it falls almost randomly. So that’s kind of a contradiction. So I like to go new and exciting ways.

The first single, OCDC, is pretty crazy. Tell me about how that song came about.

This idea came to my mind where I was toying around with a 12-string guitar and it was so out of tune that it sounded really funny and I thought “man, you know what? I’ll keep it like that and compose some crazy riffs with it and then join other instruments. “ But I thought, hang on, since this is so out of tune I can tune the other instruments to it, can I? So, I kind of started f**king them up as well and out came this. So to make it even more crazy I kind of wrote to that piece the exact opposite approach of lyrics like about OCD, and I hope that people will get it. I remember when I first posted it without any description some people were actually going “woah, what was that?” But that was exactly the mission.

What can we expect from the rest of the album?

The rest of the album has 3 or 4 more tunes that are in this direction, then there are complex compositions and some pop music as well, like “Sunshine” and “Obvious” which is one of my favorites. And then like pretty organized type songs like “Sushi Cat Doll” which is an 11 minute piece of all kinds of stuff. And then there is “Eeeps” which is made out of burps, literally. Because we started it on the Joe Satriani tour where I started to do burp noises and I had the word Eeps and everyone thought is was funny. So I later did a song with these Eeps burps and musically applied them and I thought it was a good album title too.

You’ve done a lot of work with Steven Wilson, most recently on his last album and tour. What was that like and any plans to work with him again?

With Steven it’s an on going process as well. We’ve been working with each other for over 2 years now. We have a good chemistry musically and when we tour its just great.   The album succeeded as well I think and there is a new album we are working on and that’s to be expected in 2015. Not sure about tour plans there because I have Satriani and The Aristocrats, these are pretty much my main bands along with my solo album. If I can somehow juggle around this whole kind of thing then these would be the 4 most important things I’m doing.